On Friday we woke up to grey skies. We had had an exhausting day before traveling from Highborne Cay to Hawksbill Cay and then exploring ruins ashore at Hawksbill. The lack of sun became a good excuse to delay our trip to Warderick Wells, the headquarters of the Exuma Land and Sea Park. We went back to bed.

We had picked up a mooring ball in the lower mooring field off of Hawksbill Cay the day before. It was not the calmest of waters. By afternoon we were rested up and ready to get off the boat for a while.

From Blue Wing we had a direct view of a large cairn sitting on top of a hill. According to our guidebook an osprey nest topped this pillar of stones for years before it was toppled by high winds in 1979. Once ashore we climbed a steep rock face and to the top of the hill to explore what was left of this pile of rocks.

The pile was impressive and not easy to get to. The view from the hill was stunning. It was a perfect place to contemplate the natural beauty of the islands as they stretched out towards the horizon.

The size of the cairn, knowing it was once taller, and the difficulty getting to it makes me wonder what would possess anyone to lug each one of these heavy rocks to the summit of this hill and pile them one on top of each other. Greg has a theory about this one of Aunt Exumaâ€™s mysteries.

Back down the rock face, across the beach, into the water and around a rock out cropping, across another beach and over a hill we found a sprawling salt pond and the reason for our less than settled mooring. This salt pond flowed between two large cliffs into the Exuma Banks creating a small current that rocked Blue Wing back and forth where she sat tethered to her mooring ball.

The tide was ebbing as we visited the pond. The water was shallow and many fields of spongy quick sand covered by a dark fungus spread out ready to devour our feet as we attempted to cross them. We walked on cracked flat stones and black coral like rocks, mangroves grew in the soggy earth, and low lying plants and bushes grew out of the rocks, sand and dirt. But what fascinated me most about this expansive swamp was the cairns. 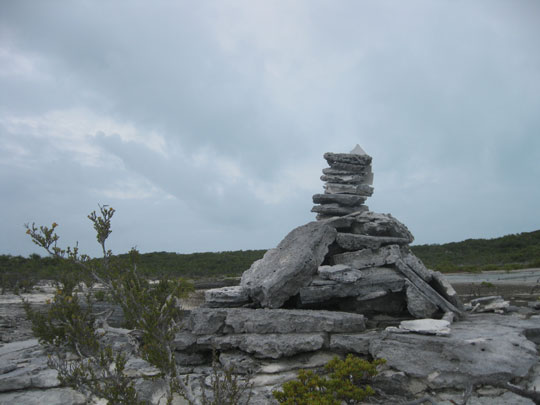 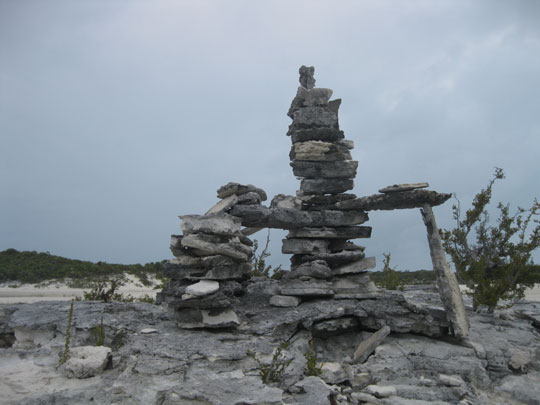 These cairns were not massive like the one we had seen on the hill, but small piles of rocks carefully stacked taking in consideration, shape, form, and balance. I marveled at who might have put these stones here with such an artistic eye. There were many of them. As soon as we saw one we saw another off in the distance and then another. Gradually they started to look more like plain old piles of rocks rather than aesthetic formations. Then, finally, I realized that these cairns werenâ€™t created merely out of the need to exercise creative energy or even as an outlet for the tedium of daily survival, but that they were actually marking a trail.

Sometimes I feel like we will one day be led into a horrible trap, but even though, when ever we see a trail, we tend to follow it. The trail wound us around quicksand and muck, over rocks, through a small stream, up a hill, into a forest of palm trees to a wide-open beach on the great Exuma Sound.

Feeling as if we had thoroughly explored the salt pond and surrounding area we returned to Blue Wing, untied our mooring, and headed to the northern mooring field off Hawksbill Cay. We motored very carefully through water not much deeper than Blue Wingâ€™s draft to arrive at a mooring ball anchored in water deep enough to keep us a float at low tide. Thankfully, the waters of the Exuma Bank were calmer here and we spent a restful evening under dreary skies that would continue to hide the Bahamian sun from us as we traveled to Warderick Wells the next day and for many days after that.

We may have left the US for Canada but we are keeping an eye on her. From our campsite tonight across the Salish Sea clouds party obscure the mountains of Washington's Olympic Peninsula. See you in the fall, United States.
It's time to lay on the beach and shed a little skin, Elephant Seal molting season. Have you ever seen so many seals in one place? Hardly Amy room at the rookery.
It's darn pretty here on the coast of California. Beach, water, mountains, and bonus! lovely flowers.
I just love a big cloud.
A little pano of the view from our current house sit in Joshua Tree. Sunrise. Swipe to see the whole thing. Seriously I think we snagged a house sit with the best view in the city.
On the road again!!!! Our last night in Arizona before we start our journey north to Alaska. Tomorrow we go to California.
Crazy Woman Camp in the Arizona desert.
Low tide and the sun setting in Puerto Peñasco last night. Today we head north to Sonoyta and across the northern border back into the US. Hate to leave Mexico so soon but we have lots of US chores to take care of. Hopefully we will see Mexico again before we leave '22.
Ballena Blanca and El Burro spending the night at Campo La Salina in Sonora, Mexico. The sun sets over expansive salt fields sacred to the Tohono O'odham. Down the road is an amazing beach filled with birds!