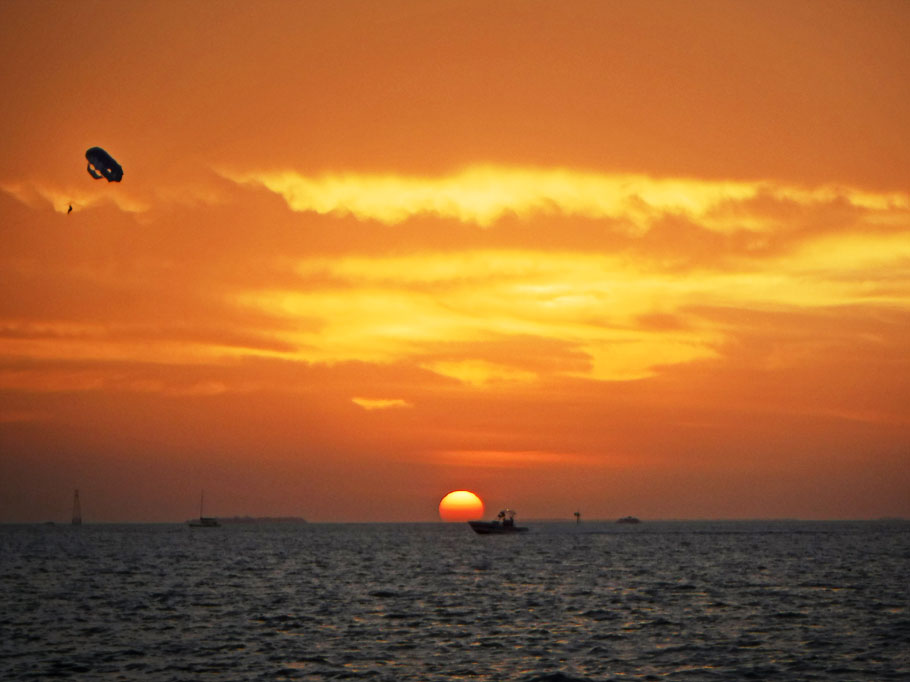 We made it to Key West! Not quite Mexico, but 120 miles closer. We had spent over a week in Fort Myers trying to finish up some of the projects we hadn’t completed on land and socializing with boating friends. Ah, socializing, that project deadline killer. Since the projects weren’t getting done, we decided we needed to move on lest we fall victim to more socializing. A good north wind was blowing in, perfect for pushing us farther south.

And did it blow! On our departure date we found a foot less water under our keel than we had the day before. Where did it go? Did the wind blow it away? We were still anchored in almost 8 feet and under normal circumstances this wouldn’t have been a big deal, except the “deep draft” entrance/exit to this anchorage was very narrow and actually quite shallow. On our arrival to Fort Meyers we traversed it shortly after low tide with our depth sounder showing at one point Blue Wing skating over the bottom with only 6 inches to spare. Now it was shortly before high tide and we were seeing less water than when we arrived.

We decided to delay a day, hoping the wind would die down and our water would reappear. That next day we checked the depth sounder again. It looked like we had regained another 3 or 4 inches. Not exactly what we were hoping for, but I was beginning to fear we’d be stuck in Fort Myers forever. We checked the tide charts. There was actually very little difference between low and high tide during the day, but like a manic friend getting their second wind during an evening out drinking, the tide was going to spike up that night. We decided to go for it. At the worse, if we went aground, we would just have to stay stuck in the channel until after dark. No big deal, since making a spectacle of ourselves is not as big of an issue as it used to be.

Four inches. We slowly motored out of the anchorage between the red and green markers that indicated our narrow path of egress, watching our depth drop to .4 then ascend back up. Yay for us making it and for not becoming known as that boat that got stuck in the channel!

From there we motored the rest of the way down the Okeechobee water way to San Carlos Bay where we planned to stop and wait for the right departure time for a daylight arrival in Key West. We ended up waiting a whole day. At some point during our stay in Fort Myers one of Greg’s feet had become one of those victims of socializing and had been sprained. The pain was pretty intense, so we decided on a day of rest. 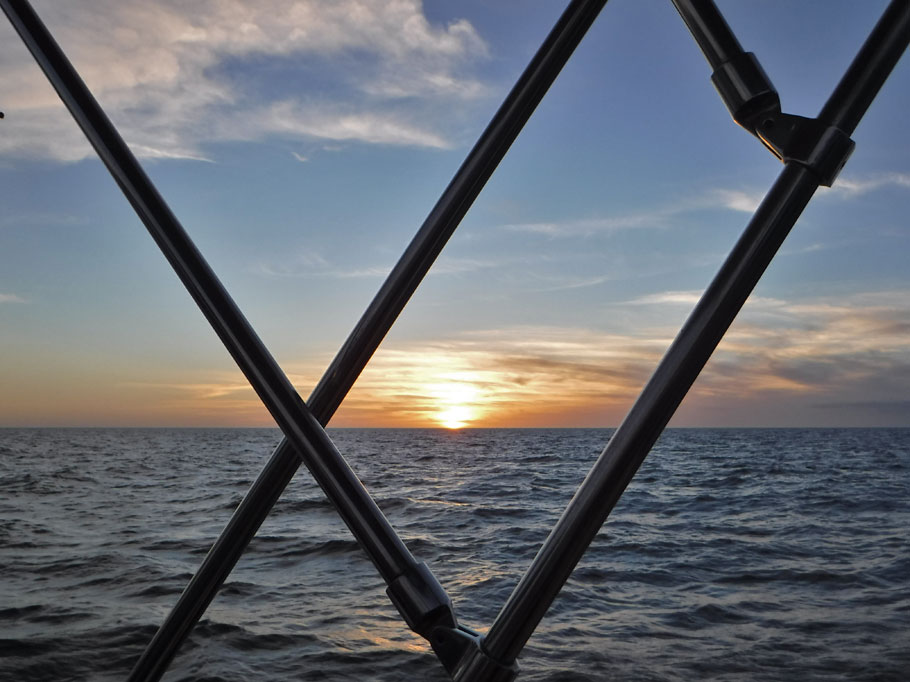 On our way to Key West, sunset over th Gulf of Mexico.

After our very slow start we did finally raise our sails and point ourselves south. The best thing about our trip for me was no sea sickness. Perhaps because I had been taking sea sickness medicine for the last 4 days due to our many departure delays, but I’m really thinking that my body has finally just given up with its attempts to discourage me of this watery life and has decided it would much more enjoyable for everyone with out all the throwing up.

The new AIS worked like a champ and Greg got a chance to put it into action, spotting a power boat speeding right towards us in the dark, he radioed them suggesting that we pass port to port. Now if only the AIS could spot crab pots, it’d be really useful.

The gulf Coast of Florida is literally littered with crab pots. We were so lucky we didn’t snag one like we did in the Bahamas.

It took us 23 hours until we dropped the hook once again. It was the longest we had sailed without any engine assist. Since I was not throwing up we were able to do 4 hour shifts at the helm. It was also the first time we had used the autopilot for a long trip. How does the saying go, you’ll have to pry the autopilot from my cold dead hands? The moon was bright and aside from the crab pots we found sailing on the left coast of Florida much nicer than the right. Our speed reached 6 knots often, which seemed super fast, occasionally 7 knots which seemed crazy fast and made the boat sound like it was going to break apart, and slowed occasional to 3 knots which seemed like crawling.

We have now been in Key West for almost a week, but no we haven’t been partying it up at the Hog’s Breath every night, soaking up rays on the beach, or communing with the six toed cats at Hemingway’s house. Greg’s foot got worse during the trip, so he has been confined to the boat. He has been spending his days with his foot elevated, trying to reduce the swelling with cold beer (as an ice pack, not drinking it). I have been trying to figure out how to do all Greg’s jobs (I got the dinghy off the deck and into the water by myself!).

So here we are waiting again. But once Greg is better we will row to shore, buy more fresh fruits and vegetables, water, and fuel, get our exit papers for the US (required to enter Mexico), and tick off the rest of those miles between us and our next stop south. 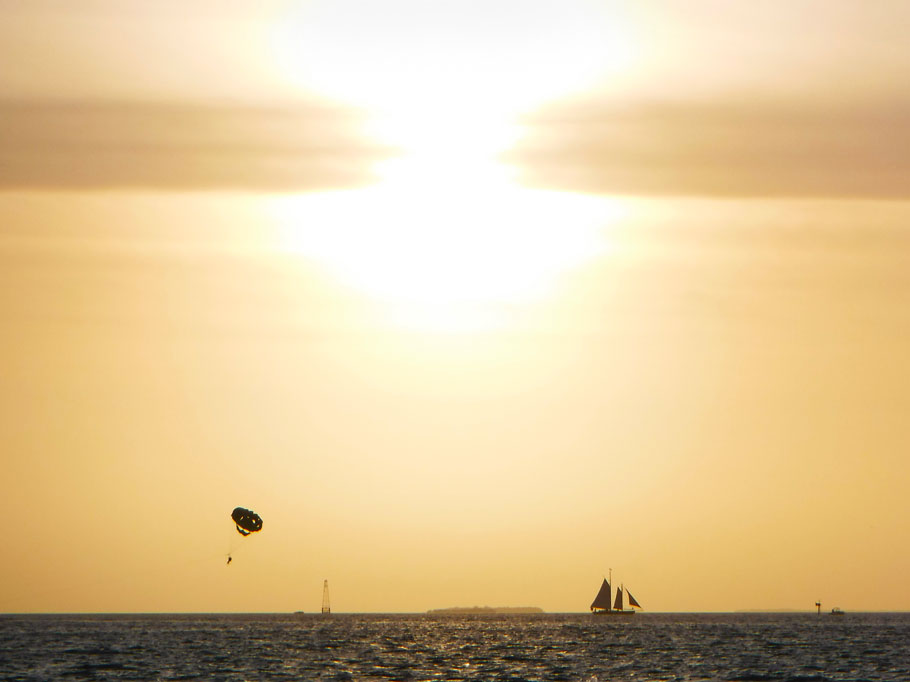 Because Greg has been laid up, we have not had the opportunity to go anywhere. We are anchored out in no-man’s-land between derilict boats and full time live aboards. There isn’t much activity besides sailing boats and parasailers in the distance. 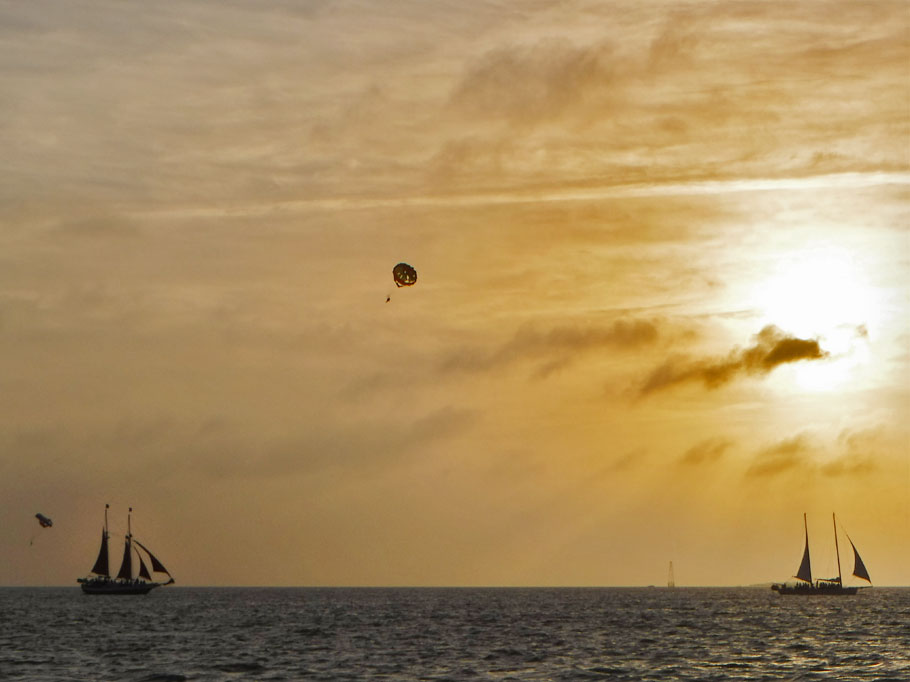 Boats on sunset cruises circle the anchorage at the end of the day. 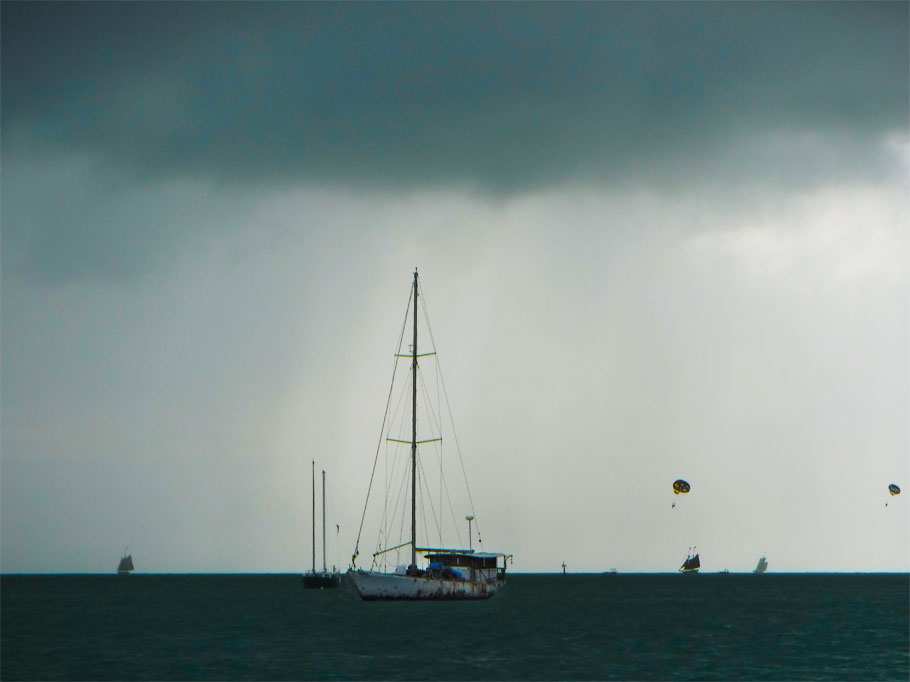 Christmas day was a bit grey, but that didn’t deter the parasailers. 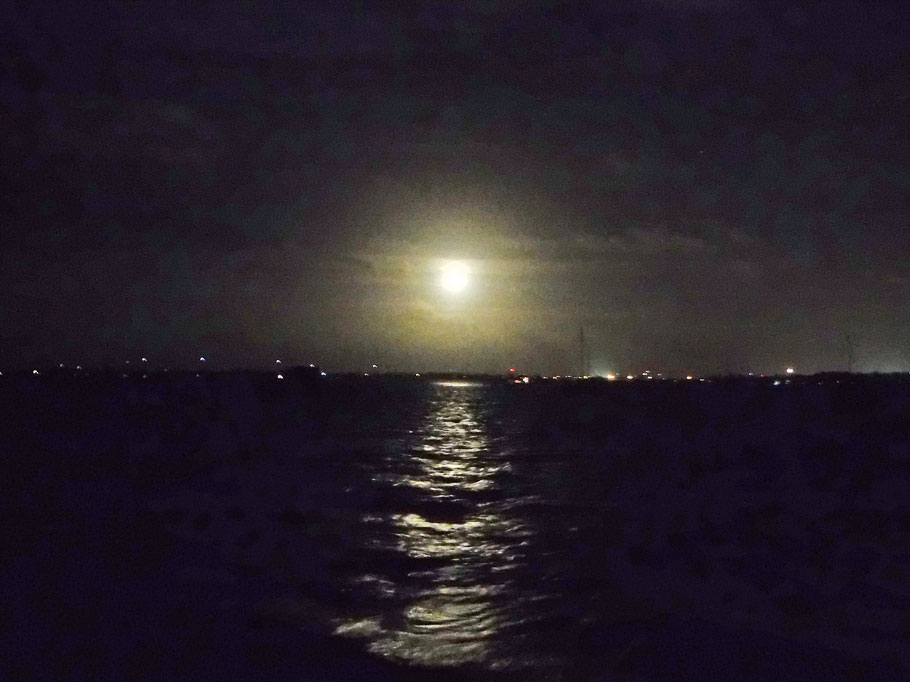 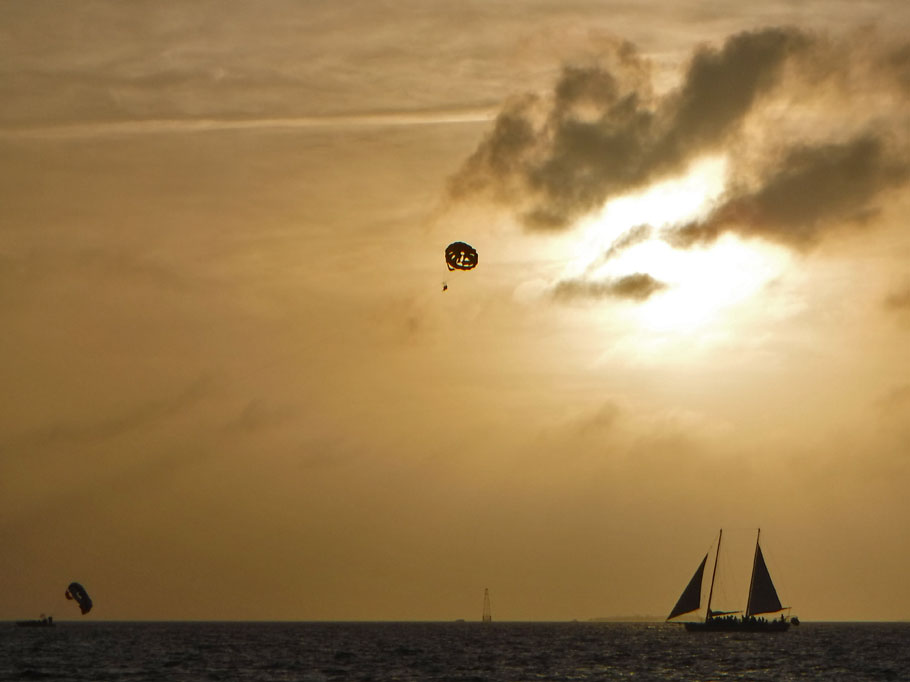 There is a persistent wind here which keeps the boat rocking. In years past this wouldn’t have been tolerable for me. Now, I just go up on deck and hold on while I take sunset pictures. 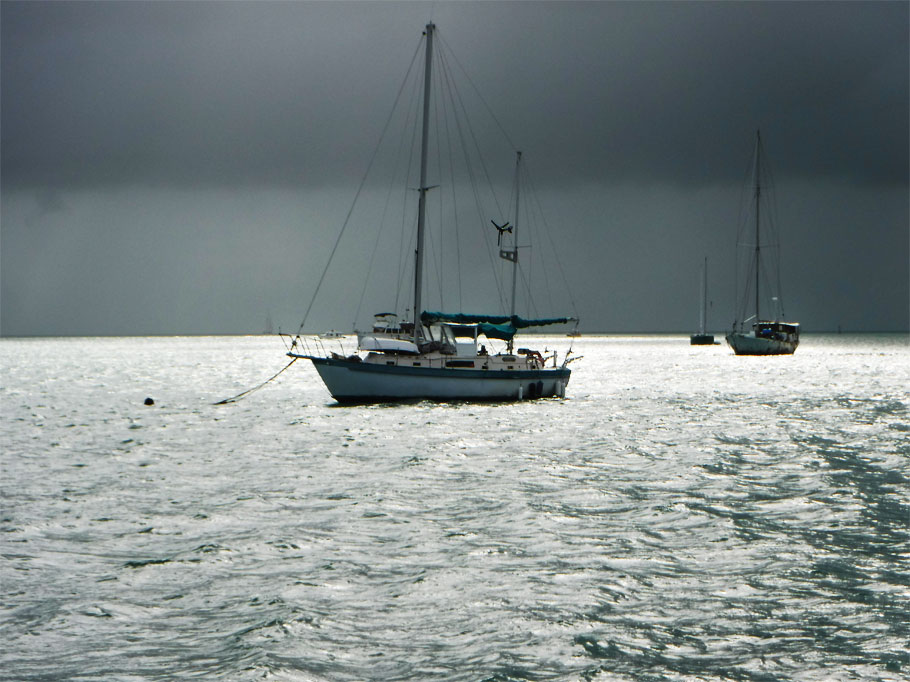 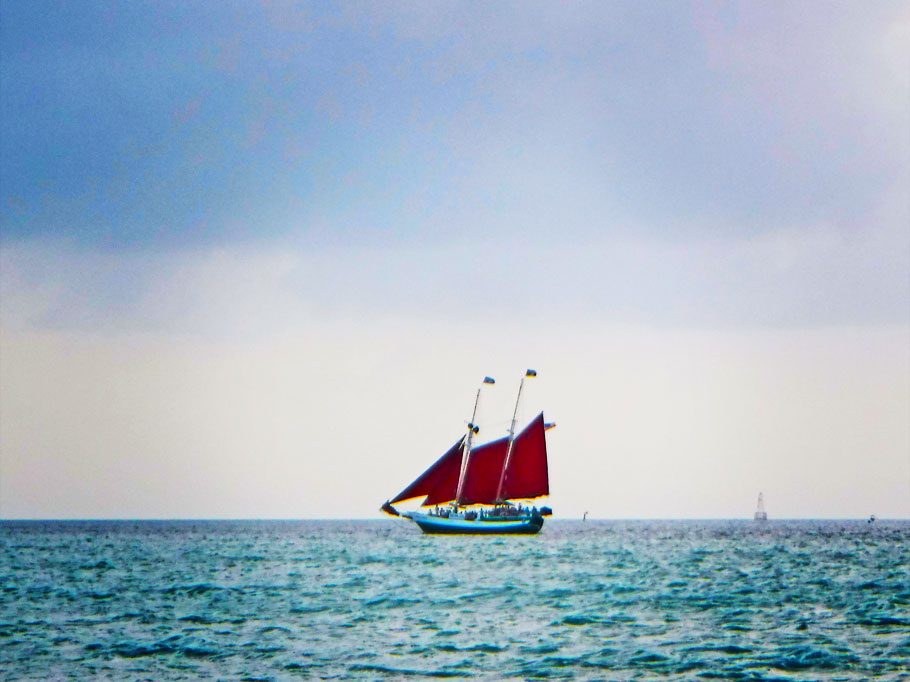 5 thoughts on “To Key West”