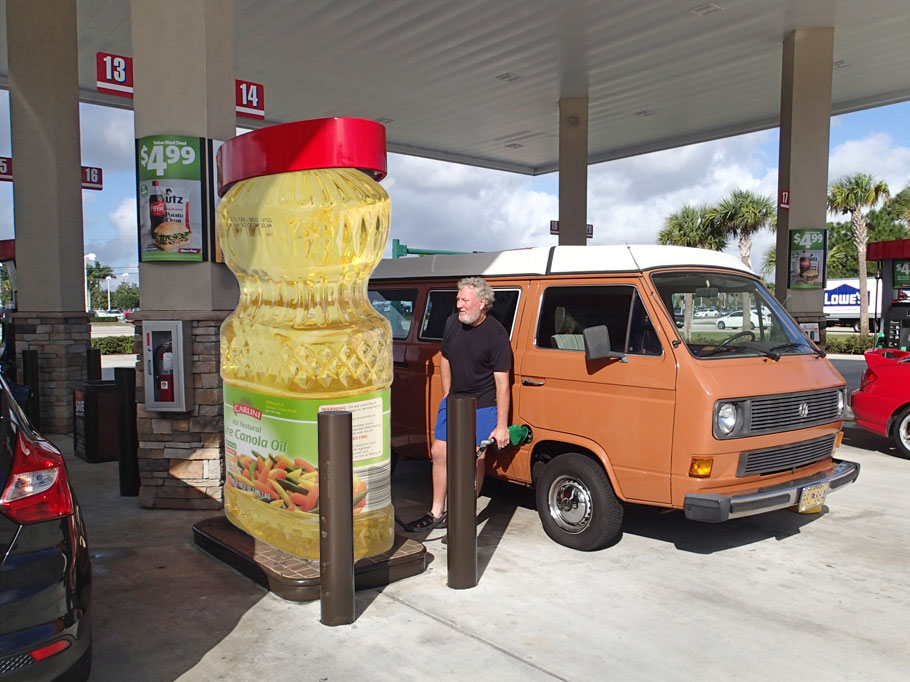 Filling up on veggie oil!

Why would anyone want to run a vehicle on Waste Vegetable Oil (WVO)? Well, cost is one reason. Restaurants have to pay to get rid of the stuff, so it shouldn’t be hard too find it for free. Another reason? It’s not a product that you have to buy from foreign regimes that don’t respect basic human rights. And, at least right now, no one is fighting any wars over WVO.

Why not burn WVO? There’s an initial cost to convert your diesel engine*. You could destroy your fuel injectors and expensive injection pump with improperly filtered WVO. And it generally requires more effort than pulling into a gas station.

So how does a “converted” engine work? Well, the WVO must be heated until it’s thin enough to use as fuel. The temp should be 160 to 180 degrees Fahrenheit, coincidentally the same temp as the coolant/water mix circulating through your warmed-up engine. So you start the engine on diesel, and warm it up, using the coolant to heat the WVO. Then, when it’s hot enough, switch fro diesel to hot french fry grease. Before you stop the engine, switch back and purge the lines of the veggie oil, so you can start up next time on diesel.

A few companies sell do-it-yourself conversion kits, and some people provide conversion services. Difficulty level? Looks a little harder than setting up Ikea furniture. Cost ranges from $1500 to $4000. About half that expense is dedicated to the problems of storing, heating, and delivering hot WVO to the engine compartment. In our case, I think I’ve found a way to do this much more cheaply. How? Find out in the next post.

* Biodiesel, which is chemically processed veggie oil, does not require a conversion. Another acronym you might hear is SVO or straight vegetable oil. Same stuff you can buy in a grocery store.

(Veggie filling station in picture above created by Duwan.)

One thought on “Why WVO?”