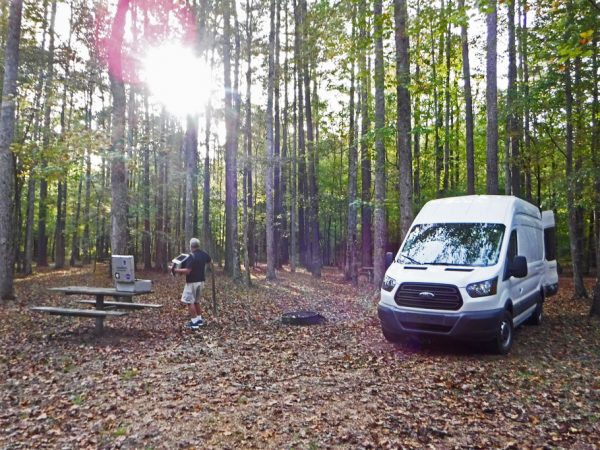 On our way to New Orleans, our first night of camping during Journey 8.0 was in the Talladega National Forest in Alabama.

This fall we begin Journey 8.0, our eighth year (!!) of wandering and our third year traveling in Ballena Blanca. Just like our sailing years, each season as we have traveled across North America we have pushed our wandering further into unknown (to us) territory and have tried to challenge ourselves more. After traveling all over the southwest our first season in the van and making a short trip down into Baja California last year, we have decided to travel the Mexican mainland for four or five months for our third season roaming on the dirt. But you probably already know this. I mean if you have followed us at all this past summer you’ve seen my amazing map, right? Click here if you haven’t seen it yet.

We left all our pets, painted houses, friends, and Cabbagetown on October 11 with this in mind – getting to Mexico. But despite all my research and the few projects we did over the summer we still had many things to do and figure out before our journey south.

First stop was to visit Greg’s parents and family in the Carolinas and work on a few upgrades for the van. Check out our recent Numbers post for pics of the family and our recent Expenses post for our list of upgrades.

Once the projects were wrapped up at Greg’s folk’s house it was time to hit the road, but we weren’t pointed towards Mexico quite yet. Because of time constraints, we couldn’t finish all of our van upgrades so I had material for one of them sent to friends in Tucson, AZ. Tucson is quite a bit further than our first opportunity to cross the southern border, but we had plenty of reasons to do the extra miles, including that we have a couple of friends who have a large lot we can moochdock on in Tucson, a couple of South Carolina friends would be traveling to Tucson to visit another one of our friends who lives in Tucson at the same time we would arrive there, Tucson is very close to Greg’s Mexican dentist, and we could do a little touring and visiting along the route.

We hit the road on Oct. 22. Our first big stop on our way out west was as always, New Orleans. New Orleans is an amazing city full of music, art, and culture and a wonderful place to visit but our main reason for the annual stop is that my beautiful and talented niece, Ariadne, lives there.

It is always great to visit a town where you have friends or family. They can become your own private tour guide. New Orleans is a bonus for us since my niece, among other things like being a published playwright, is a professional tour guide.

Usually, she does ghost and cemetery tours but was breaking into doing food tours just as we were visiting. She asked us if we wanted to be her beta run for the tour. A day of eating and walking around in NoLa gratis – yeah, sure, no problem, we’ll be your guinea pigs.

We had a great day on the tour, then an evening of music, drinking, and more eating. Greg swore he’d never eat again.

From New Orleans, we pushed on west. With our imminent departure from the United States, our always desire to squeeze just a little more value out of National Parks pass, and just enough time to for one more detour on our way to Tucson we thought we’d check out Carlsbad Caverns. More on that next time! 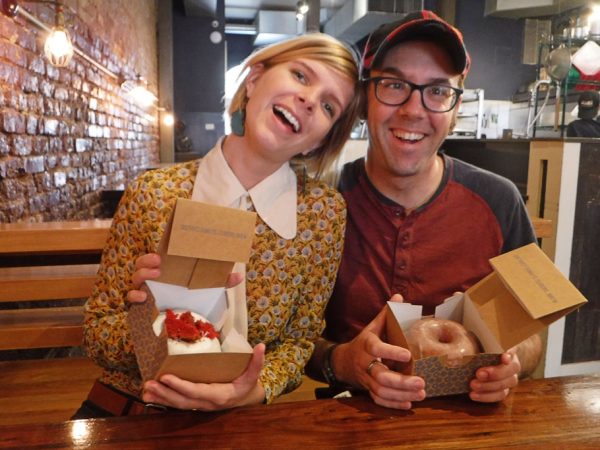 Ariadne and her boyfriend, Ian, a local actor, comedian, and emcee. Ian was hired by Sidewalk Food Tours (who also do food tours in other major cities like New York, Chicago, and Paris) to be the architect of our tour. He had already developed a tour in the French Quarter. This was a brand new one set in New Orleans’ Garden District. 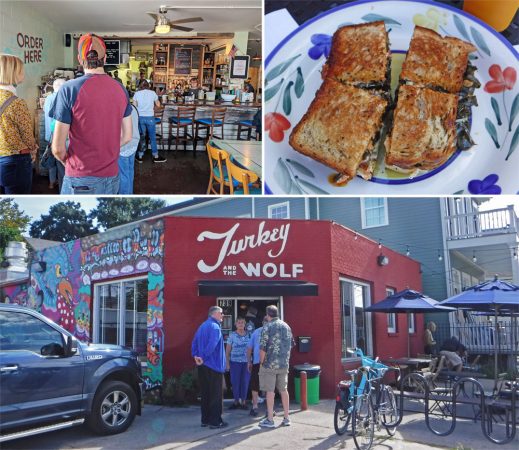 Our first stop was at Turkey and the Wolf. Voted best new restaurant in America 2017 by Bon Appétit magazine, Turkey and the Wolf is simply a sandwich shop that takes plain old items such as ham and baloney and recreates them into something special. Since 3 out of the 4 of us are vegetarians, we got veggie items at each stop. At Turkey and the Wolf, we tried the Collard Green Melt – a veggie take on the classic Rueben. It was truly amazing. (Please note that all portions were split between multiple people.) 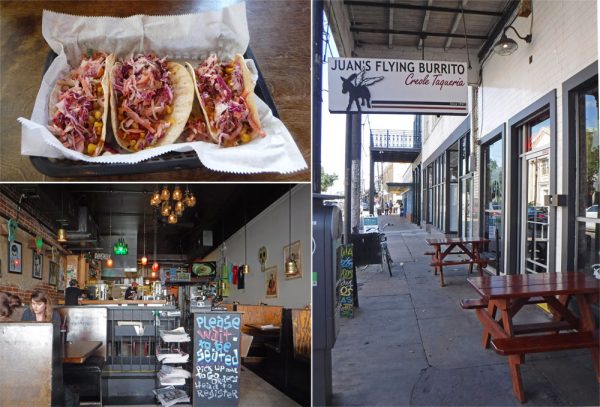 Next stop, Juan’s Flying Burrito. Veggy Tacos. Along with the food, Ariadne would give us a little history or story about each place we stopped. 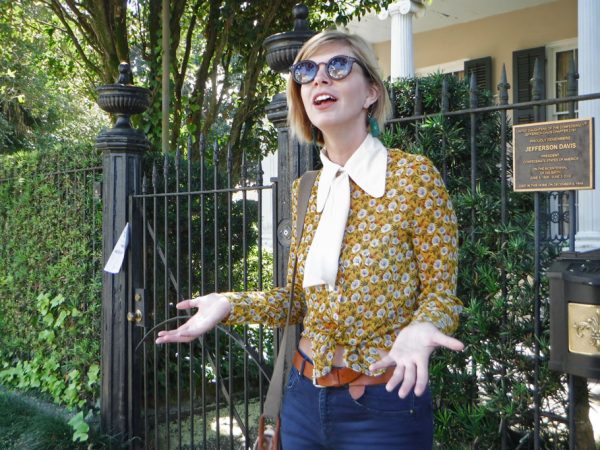 After the Flying Burrito we went on a little walk through the Garden District to digest and work up an appetite for more food. Ariadne told us about some houses and the the famous people who visited or lived in the them. Jefferson Davis, president of the confederacy, died in this home December 6, 1889. 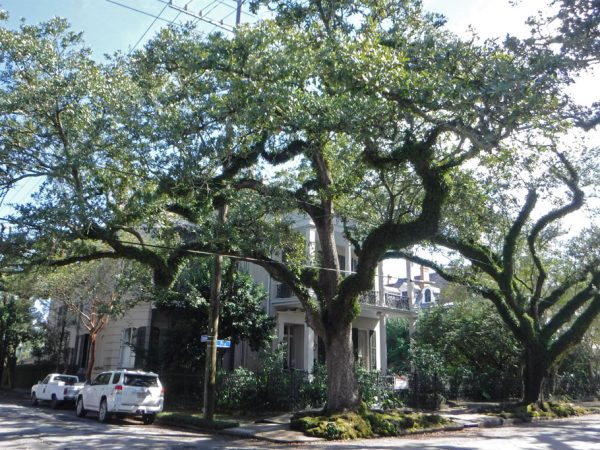 This amazing live oak sits in front of a home that was once owned by Anne Rice. The house is known as The Rosegate House because of the rosette pattern of its fence. 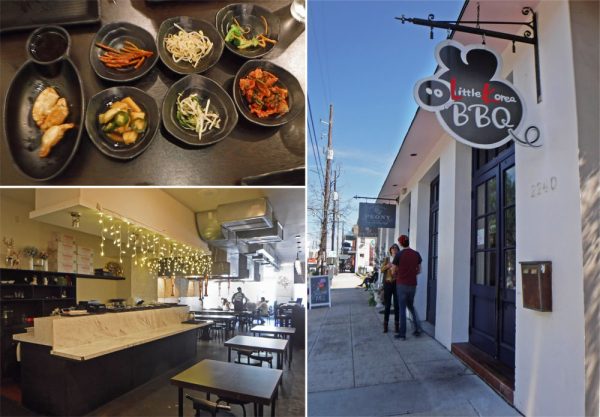 After our tour through the neighborhood it was time to start eating again. Next up was Little Korea BBQ. We got vegetable dumplings. They were served with bowls of Banchan – various spicy vegetable dishes. 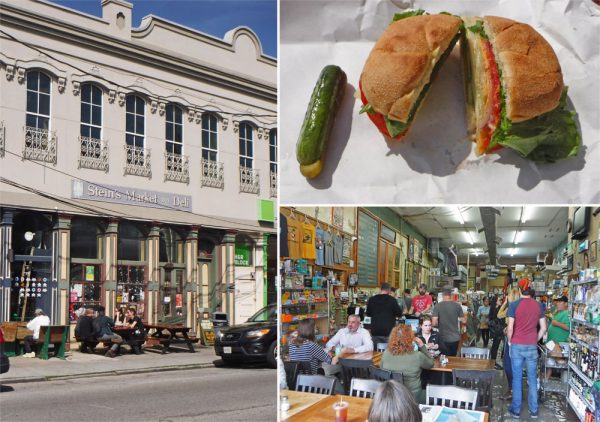 Ariadne had to call ahead for our food from Stein Deli – they are that popular at lunch. We had vegetarian sandwiches washed down with a beer (not included in the tour). 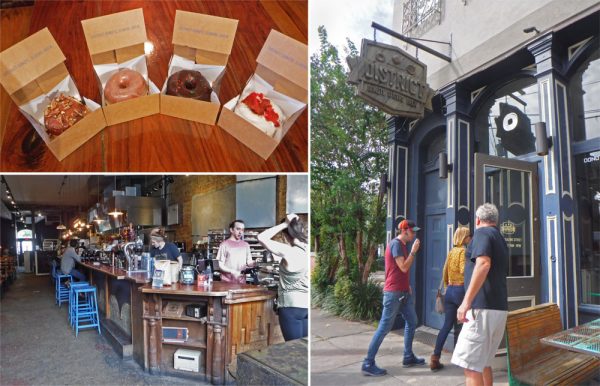 Last stop. Donuts at District Donuts! These guys were big and as yummy as they look. 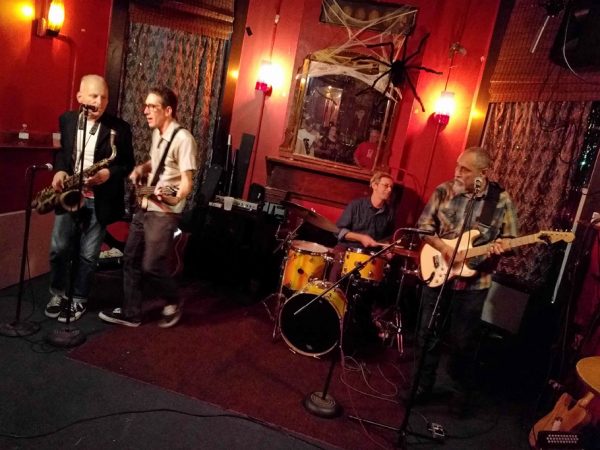 In the evening we saw the Iguanas, one of my favorite bands playing a tiny little club called the Circle Bar. 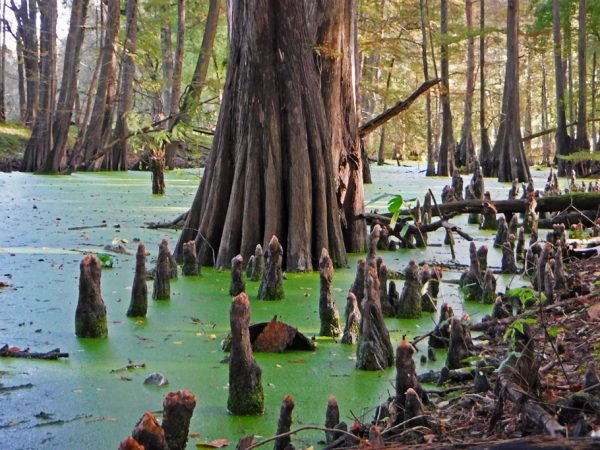 After New Orleans we spent a night in a Louisiana National Forest. We saw this swamp on the drive there and I had to jump out and take pictures. Some day we won’t be in such a hurry to get to the west and will spend some time exploring this state of uncommon vegetation.

After we left Carlsbad Caverns we made a stop in Guadalupe Mountains National Park to rest for a few days and catch up on our writing before we journeyed on to Tucson.