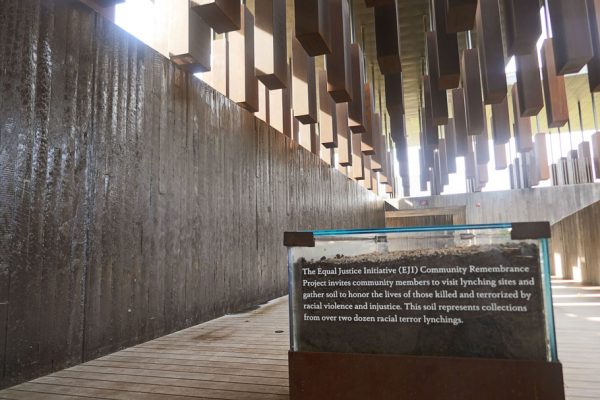 This glass box inside of The National Memorial for Peace and Justice holds soil collected from over two dozen lynching sites as part of The Equal Justice Initiative Community Remembrance Project. Inside the Legacy Museum are displayed Individual jars of soil collected from lynching sites commemorating the specific individual lynched at those sites.

After we left Knoxville we headed further south trying to stay ahead of the imminent cold weather of late fall. On the way, we made a stop in Montgomery, AL at the Legacy Museum: From Enslavement to Mass Incarceration and the National Memorial for Peace And Justice.

There aren’t a lot of pictures from this stop since photos weren’t allowed inside the Museum, only at the memorial. I thought I might lump this visit in with our Knoxville post but then I started looking at the pictures from the memorial. By far this museum and monument were two the most moving places we have ever visited. I decided that our experience in Montgomery needed its own post.

Both the Legacy Museum and the National Memorial for Peace and Justice are part of the Equal Justice Initiative, an organization “committed to ending mass incarceration and excessive punishment in the United States, to challenging racial and economic injustice, and to protecting basic human rights for the most vulnerable people in American society.”

Both sites are located less than a mile from each other in downtown Montgomery. Tickets to the museum are timed, allowing people entry every 30 minutes. We bought a 9 am entry (the first entry of the day), making it a combo ticket for both the memorial and museum.

There were just a handful of people waiting to get in when we arrived at the 11,000 square-foot museum. Located on a site where enslaved people were once warehoused, the museum chronicles the history of Black Americans in the United States from Slavery to Mass Incarceration.

One of the more arresting exhibits in the museum takes you from the lobby to the main exhibit hall. You walk down a dark corridor past replicas of slave pens. As you approach each pen a life-sized video hologram of either a man, woman or child comes to life and speaks to you in hushed tones. You have to stand very still and close to the enclosure to hear their stories describing what it is like to be separated from their families and to wait and be prepared for auction.

In the main exhibit hall, interactive displays, art, video, text, and pictures continue to take you through the rest of the story from the domestic slave trade through reconstruction, lynching, racial terrorism, Jim Crow laws, segregation, civil rights protests to mass incarceration. We spent 3 hours in the museum and by the time we left it was packed.

After the museum, we did a short walk to the memorial. I hope my pictures convey just a little bit of the gravity of the memorial.

The National Memorial for Peace and Justice 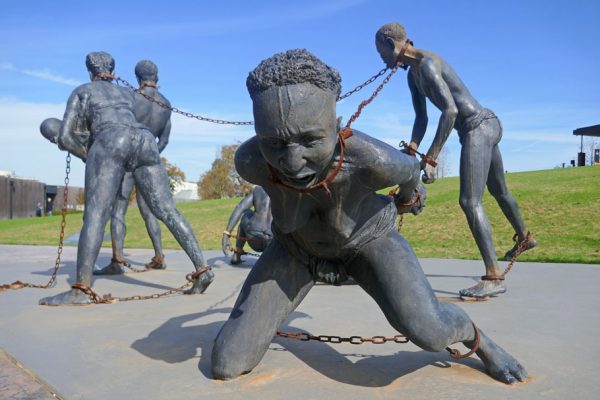 Nkyinkyim Installation, 2018, by Kwame Akoto-Bamfo. This is the first sculpture you see as you enter the grounds of the memorial. Set on 6 acres, the memorial contains gardens and sculptures representing African Americans from slavery to mass incarceration on a path that leads to and from the around the main exhibit, a structure which houses monuments to the victims of racial terror lynching in the United States from 1877 to 1950. 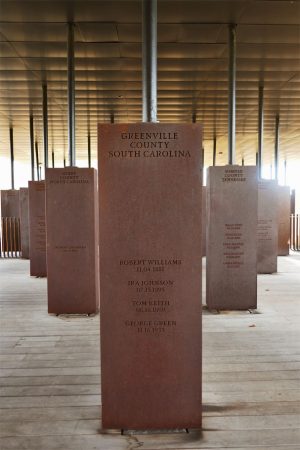 Entering the structure, you see rows and rows of upright corten steel boxes (monuments) each representing a county within a specific state. On each memorial are the names and dates of the individuals lynched in that county. 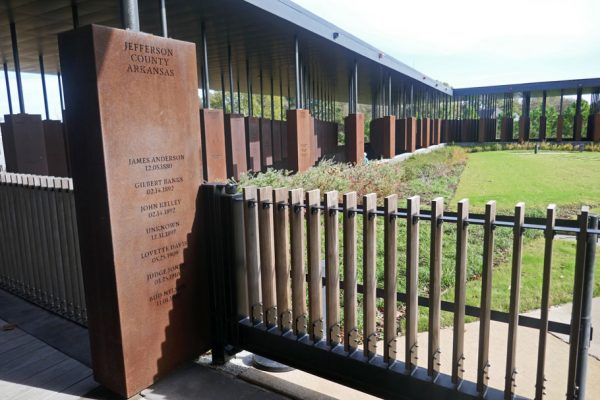 The monuments are arranged in a square with a central plaza in the middle. Lynchings were conducted by as few as two people to as many as mobs of 10,000. They often happened in broad daylight and sometimes “on the courthouse lawn.” 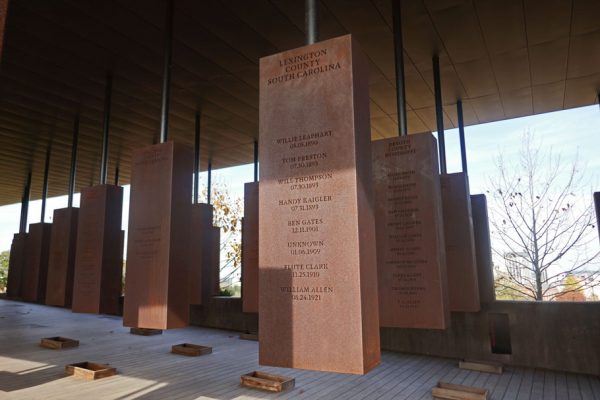 As we walked through the memorial we started to look for counties where we had each lived. Greg lived in Lexington County when I met him. 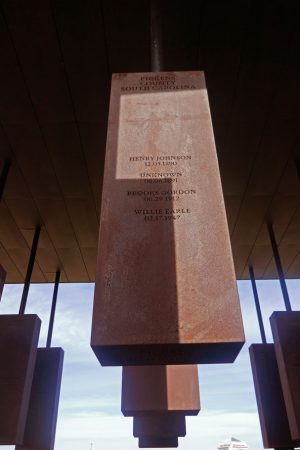 The memorials rose as we made our way through them. Greg lived in Pickens County when he went to college at Clemson. Pickens County borders Greenville County where my mother grew up. She would have been 19 years old when the last name on this tomb, Willie Earle, was lynched on February 17, 1947. The oldest of the Baby Boomers would have been toddlers. This lynching happened during the life of my generation. 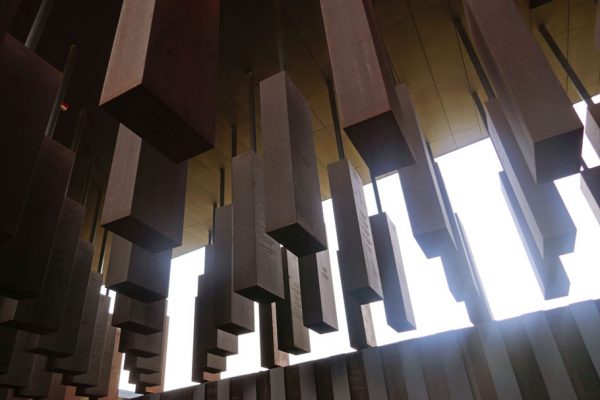 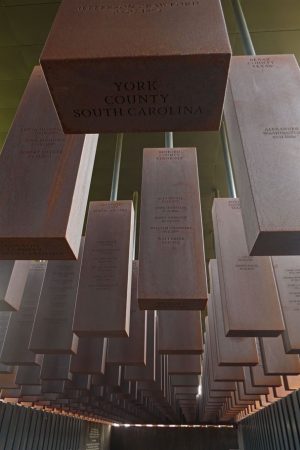 There are 800 of these six-foot monuments with over 4,400 names on them. Lynchings were meant to terrorize black Americans and enforce a racial hierarchy. Six million black Americans fled the South as a result of this reign of terror. 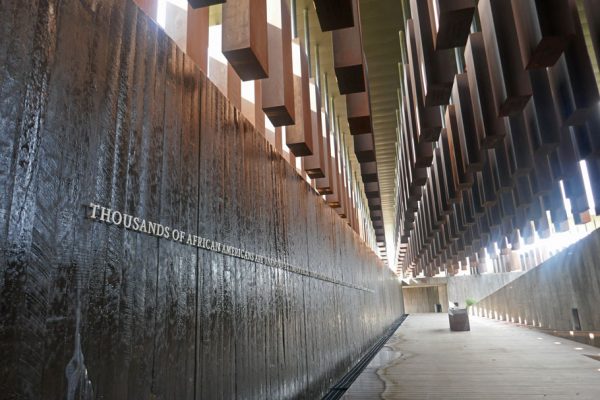 Water cascades down this wall. Written on it is “Thousands of African Americans are unknown victims of racial terror lynchings whose deaths cannot be documented, many whose names will never be known. They are all honored here.” 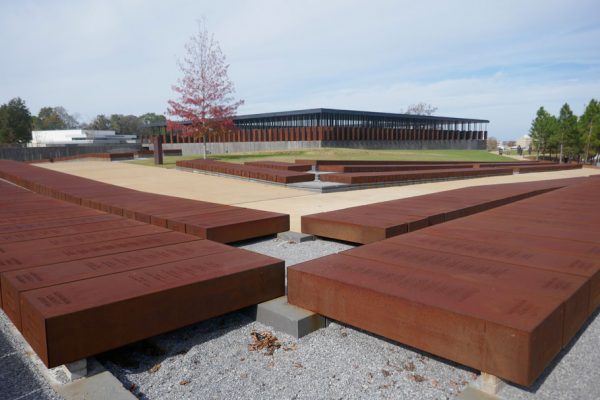 Outside duplicate monuments lay waiting to be claimed and installed in the counties they represent. The Equal Justice Initiative is in talks with dozens of communities seeking to claim their monuments. 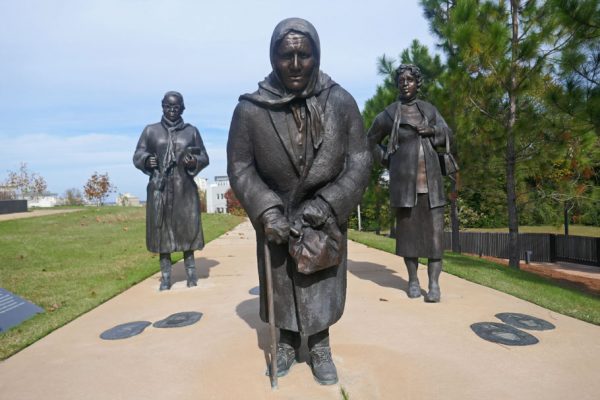 Guided by Justice, 2018, by Diana King. More than once in 1955 black women were arrested for challenging Montgomery’s racial segregation law for buses. The arrest of Rosa Parks sparked mass-protests. For nearly a year, black people boycotted the buses in Montgomery. This sculpture honors those black women who together walked thousands of miles to end racial segregation on public buses. 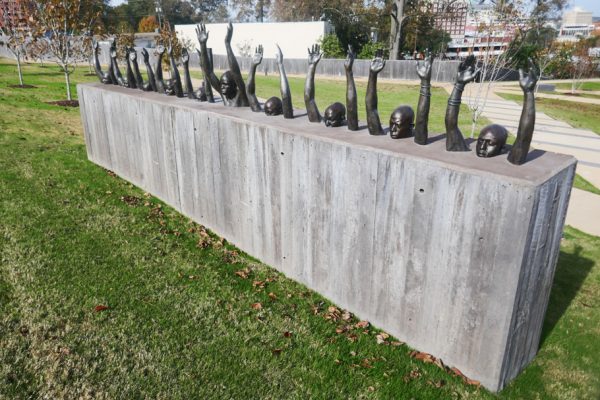 Raise Up, 2016, by Hank Willis Thomas. The story catches up with us with the last sculpture depicting black and brown people who are presumed guilty simply by the color of their skin.

For us the museum and the memorial added to an unexpected theme that has been running through our travels at many of our stops since we left Atlanta this past October – slavery and its legacy of hatred and injustice that continues today. In contrast to the rocks, ruins, and roadside attractions we gravitate to in the west, our travels this fall/winter have been a lot more reflective and much more real in understanding and relating to the world we currently live in.

4 thoughts on “A Legacy in Montgomery”