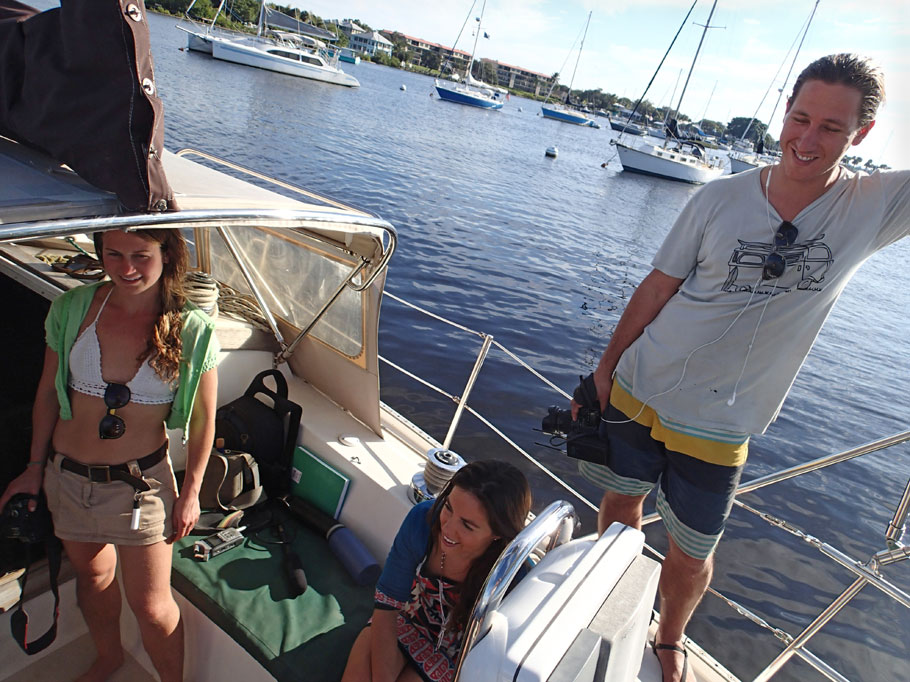 I feel like we have joined a gang, a scene, a tribe, a special club, a secret community with out the secret handshake, but with, instead, small gestures, waves, nods across parking lots and intersections shared between occupants of one Westfalia to another that says â€œWe da shit! We cooâ€™!â€ At Indiantown Marina where Blue Wing was on the hard we met three other Westfalias and their owners. Stories were traded and tips shared. During a holiday party at the marina Greg excitedly pulled me from the dance floor and led me to the parking lot where he and another diesel Westy owner stood among the contents of this guyâ€™s van spread out on the pavement, removed so that he and Greg could peer at the VWâ€™s engine (remember the Westfalia engine is in the back of the van inside the rear hatch) and discuss smoke screws and how fast each other’s van could accelerate up a hill.

As soon as we conjured up the idea to buy a Westfalia last year, I started searching the internet to learn about people who were living on the road, especially in vans, and even more especially in VW vans. I found lots of blogs and created a Digg account to collect and read them all in one place every day. A few months ago a post popped up in my feed titled â€œCalling all Nomads.â€ I clicked on the link to discover that the creators of the website â€œWhereâ€™s my Office Nowâ€ were looking for nomads to interview for a video web series. I wrote them right away and told them our story and they wrote back and asked if weâ€™d like to be a part of the project.

On December 15, four bright traveling twenty-somethings rolled into the Sunset Bay Marina parking lot. Emily and Corey of â€œWhereâ€™s my Office Nowâ€ and Rachel and James of â€œIdle Theory Busâ€ exited their respective vans/homes armed with cameras and microphones. After hugs and introductions we all boarded Blue Wing at the dock and motored over to our mooring ball to swing and quietly bob in the warmth of a bright Florida afternoon. Below decks, James filmed us while Emily asked us how we became nomads, how we sustain being nomads, why we do this nomadic thing, our biggest nomadic challenges, etc., etc. Greg and I shared all our nomadic wisdom, nomadic ideas, and nomadic anecdotes. 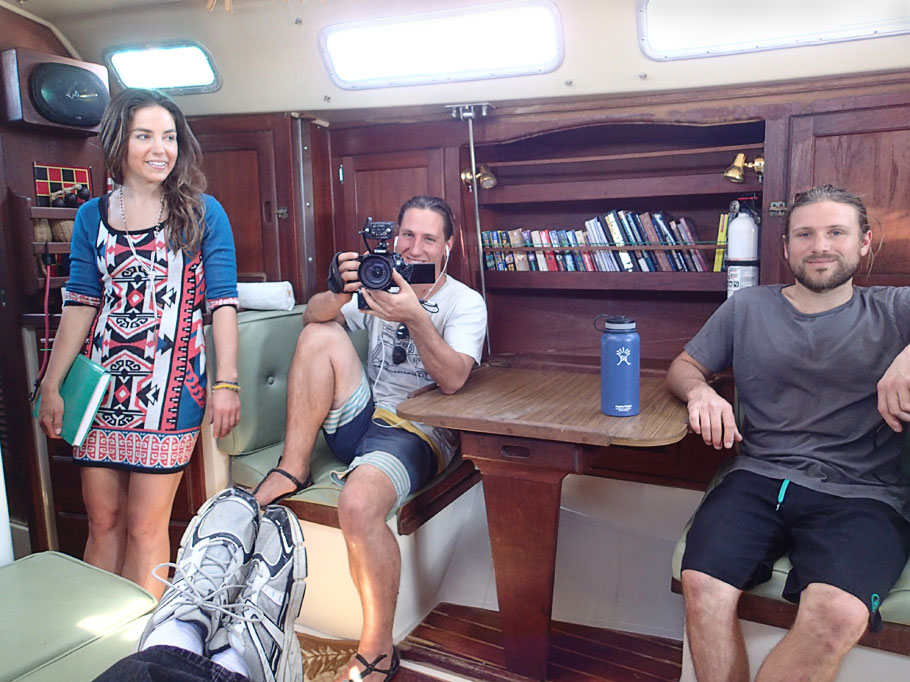 Emily, James and Corey getting ready to film us. 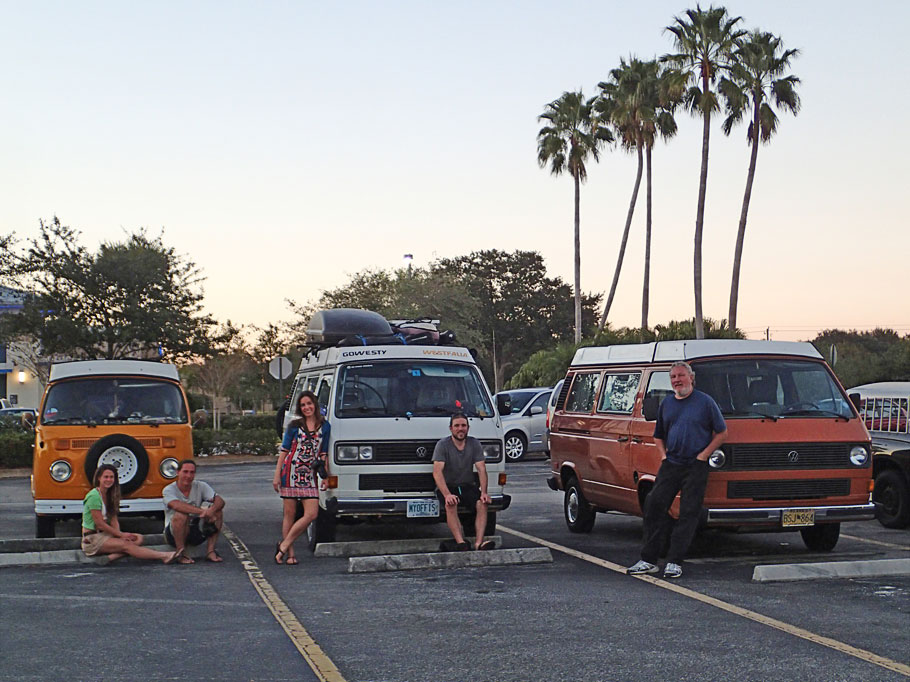 The van gang. Rachel and James with Sunshine, Emily and Corey with Boscha, and Greg with Great A'Tuin.

After the interview back at Gregâ€™s folkâ€™s house we enjoyed lively conversation about everyoneâ€™s traveling adventures, about heathcare, about diet, about social networking, about farming (WWOOFing), about mountain biking injuries and more talk about insurance, and about how to make rabbit moccasins from scratch. Our new friends cooked us all dinner and then Rachel and Greg broke out their ukeleles and entertained us with cowboy songs, folk songs, and a few cleverly irreverent ditties. Although we offered our spare bedrooms to the two couples, they opted to stay in their homes parked in the driveway overnight. 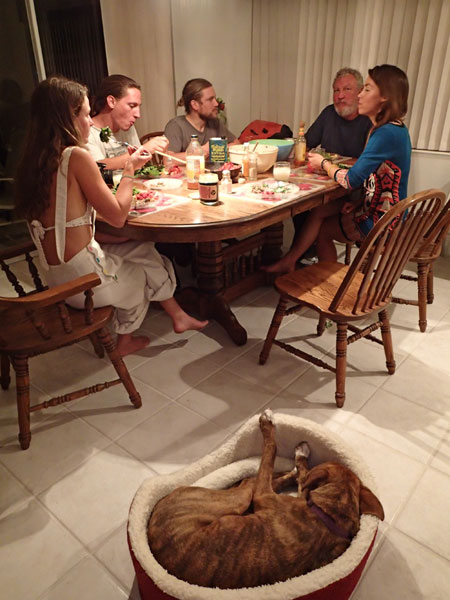 Penny, Emily and Corey’s dog, gets cozy while the rest of us enjoy a dinner with friends. 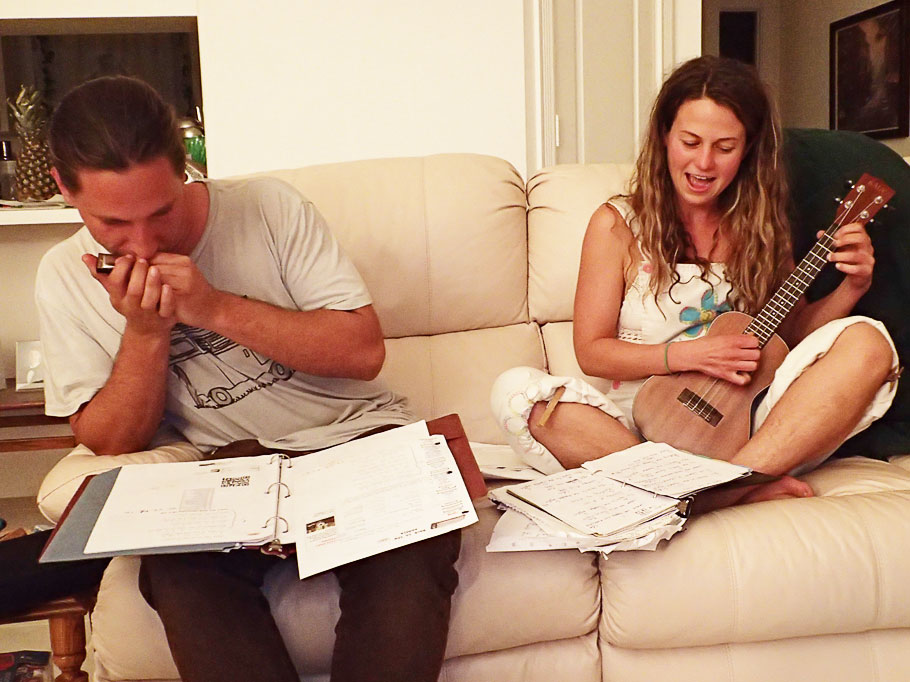 James gets down on the harmonica while Rachel plucks a tune on the uke. 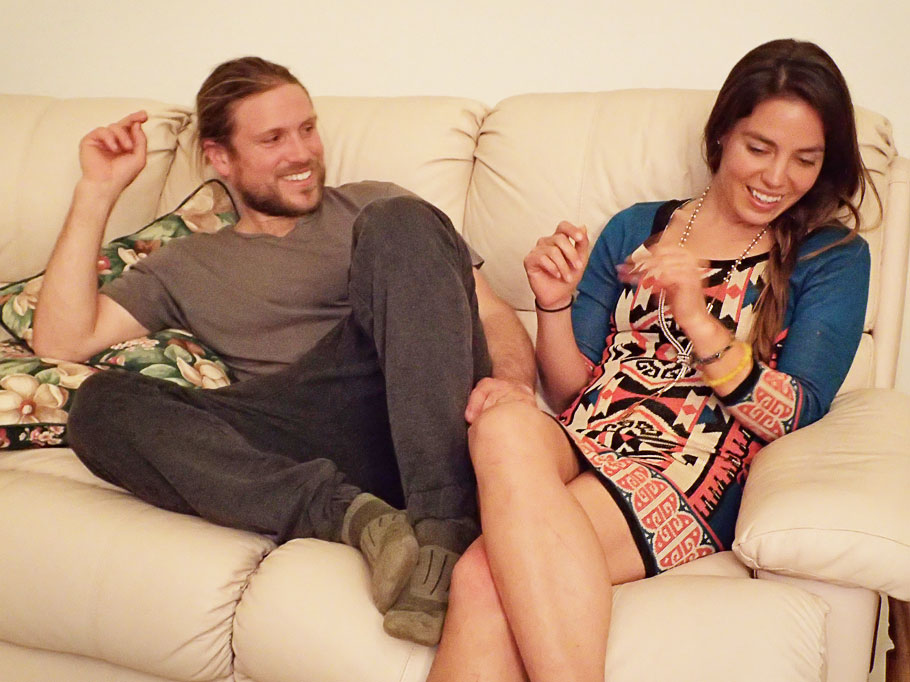 Digging the music. Corey and Emily.

I was curious how these two traveling couples had connected, so I asked. They told me they had been following each other on Instagram when their paths finally converged outside the digital world. During this real life meetup they discussed their ideas for a web series, realized they shared complimentary resources and talents and decided to team up.

Now, I had heard of Instagram before, but just didnâ€™t really get the concept. Emily explained it as being like Facebook without all of the noise. It sounded interesting, so the next day after the nomads left I signed up. I posted a few pictures, gained a few followers and added a few people to follow. A few days later, â€œWhereâ€™s My Office Now,â€ posted a picture of us on their Instagram feed along with a paragraph about our story. That picture received 514 likes. People commented calling us inspiring and cool. We gained over 100 Instragram followers that day and our blog was viewed over 250 times.

For as much as have wanted to share our journey with others, it was a little overwhelming. Are we cool? Are we inspiring? I mean, I know we are cool, we own a Westfalia, right? We are part of the van gang! But really, are we cool? I donâ€™t know. We are just trying to make our lives interesting and live true to our ideas. We find inspiration in sharing our story with our friends, family, and strangers. Every follower we gain, every hit on the blog, every comment on one of our posts inspires US to keep wandering down the road and sailing across seas. 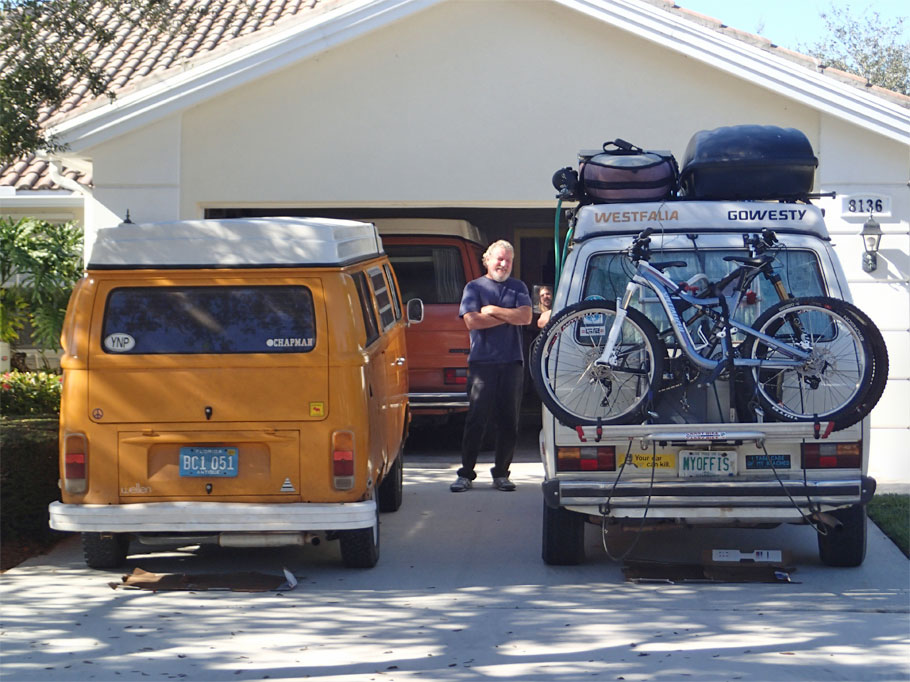 Greg talks to Corey through the van window as they get ready to leave on their journey south to interview more nomads. Note the cardboard under both the vans — one of the charms of a VW — they all leak oil. 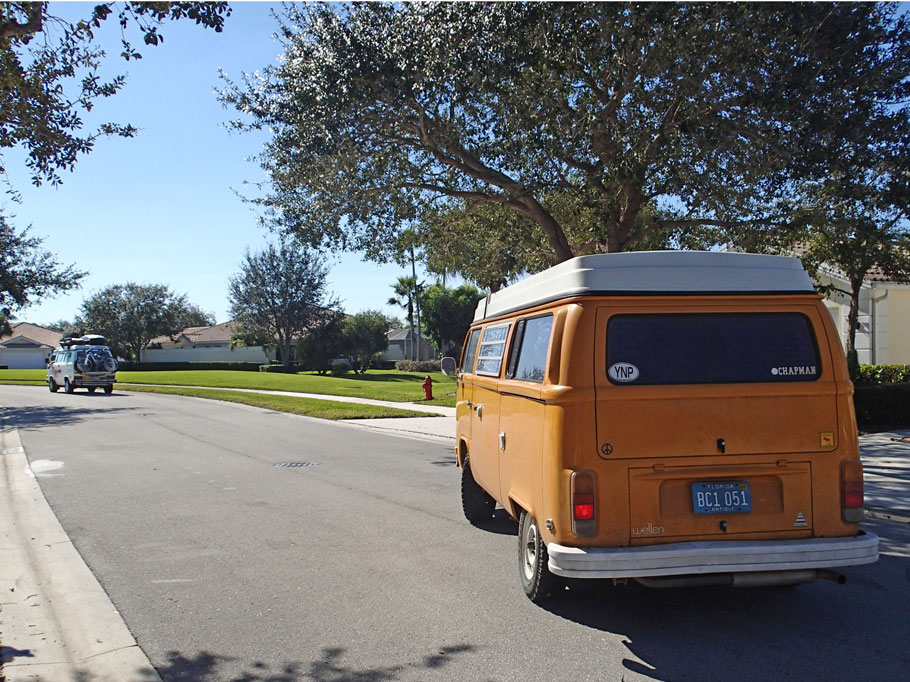 Boscha and Sunshine roll on to the next destination.

5 thoughts on “The Van Gang”