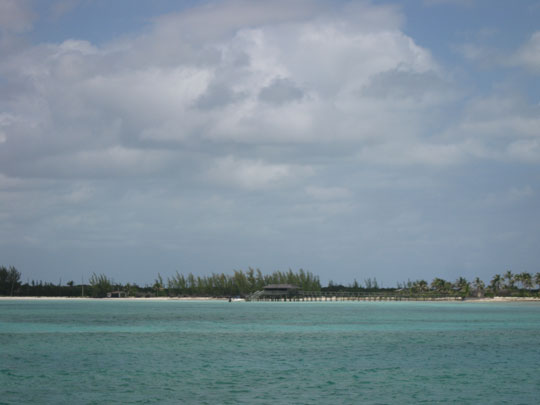 Look closely and you can see a very long pier extending into the water. It is the longest pier in Abaco for very good reason. Up to a half mile of shallow water surrounds the shore.

We finally made it to Cherokee Point on Saturday. We needed supplies so we made plans to go into town. On the chart the town looked like it was a good distance from where we were anchored. As we looked across Cherokee Sound from Blue Wingâ€™s deck it appeared the town was around the point we saw in the northwest.

We put the dinghy into the water and headed across the sound. It was a good long way and the water tended to be a bit shallow. As the other side of the point came into view, we didnâ€™t see a town. We looked back scanning the shore and saw a few houses nestled between some trees. We decided to turn around and head towards them, thinking maybe they led to the town.

Now, if you have been following this blog for some time, you may know that sometimes our journey is like an adventure movie, riding giant waves into the ocean, water crashing over Blue Wingâ€™s bow, and the howling of high wind. But, sometimes, our journey is like a slow moving surreal foreign art film.

On our new path, a little less than a half-mile from the beach, we ran into more shallow water. We raised the outboard, got out of the boat and started to tow it. The water continued to get shallower and shallower. Soon there was barely 6 inches underneath the boat. Up ahead we saw two kayakers. Both were dressed in wide brimmed hats, light colored long sleeve shirts and long black pants. They each towed a bright red kayak parallel to the shoreline. One kayaker sat back in his/her kayak and started paddling. We headed towards them, hoping they would lead us to deeper water.

The terrain under our feet changed from rocks to sand to grass. We could see bright orange baby conch every few feet.

We trudged on towards the beach.

Eventually the water became to shallow for the dinghy to float. Greg took over the towing and dragged the boat as we continued towards our destination. The kayakers were now further away. One stopped on a sand bar and cast a fishing line as the other continued to tow his/her kayak, a red gash in a muted landscape.

As we ventured on I noticed that one side of the dinghy was becoming deflated. We had a puncture.

We were closer to the beach now, but the water ahead of us was still too shallow to float the dinghy and in some places there was no water at all. I suggested that Greg continue to the shore and leave me with the boat. As he walked towards the houses I watched as his orange kahuna shirt disappeared behind the trees. I looked away from the beach and contemplated how to get to deeper water.

I started to drag the boat diagonally from the shoreline back towards the open water.

Closer to the beach I saw two teenage girls wading. I looked to see how far their feet sank with each step, but the water was still too shallow where they were.

I dragged the boat.

From the beach a man emerged wearing what appeared to be black socks. He strode with purpose out into the water. Soon two boys appeared, trailing behind him.

I stopped and surveyed the landscape for deeper water and continued to drag the boat.

The kayakers and their red boats were now getting father away, one on each side of a sand bar. Up ahead I could see a patch of deeper water. I dragged the boat toward it. The dinghy was afloat now, but I was still surrounded by shallow water and sand bars. I looked towards the beach and thought I saw Greg, but it was the bark of a tree and not his bright kahuna shirt. Up ahead a little closer to the beach I saw two children playing on a sand bar. It looked like deeper water might surround them, but I couldnâ€™t really tell. Out away from the beach I could see the open water, but I could clearly see the shallow water separated me from it. I decided to head out to the open water and soon was back to dragging when the water got shallow again.

I contemplated going back and trying another direction. I wasnâ€™t sure how much time had passed. I looked to the beach for a sign of Greg. I only saw houses and trees. I grabbed the end of the dinghy painter and waded out as far I could go with out letting go of the boat. It was still shallow. I walked back, choked back up on the painter, looked to the beach, and decided to continue my course.

I had lost track of the kayakers. They were just gone. Lost in the open landscape. I looked across the sound and spied Blue Wing, tiny in the distance. I looked back towards the houses and trees, but no kahuna shirt emerged. Far away, a couple crossed in front of the beach holding hands.

I continued to drag the dinghy.

Finally I reached deep water. The dinghy floated. I stood and waited.

Eventually on the distant shore I saw a splotch of orange, Greg in his kahuna shirt. Although he was a good distance away, I could see the black bag slung over his shoulder. He was successful. We had our supplies. I waved my arm in the air to signal my position, a futile exercise, as I was the only woman with a dinghy standing in the water close to a half-mile off shore.

When Greg reached me we continued to walk. Blue Wing was too far away to risk a ride in our deflating boat. We walked the perimeter of the shallow water and then the perimeter of the shore. The terrain became uneven and unpredictable. It was hard to tell how deep each step would take us. I grazed my ankle on a sharp rock. Blue Wind was much closer now. I told Greg it was time to ride.

We made it back to Blue Wing without a problem. Greg towed the dinghy on to the deck to assess the damages and make repairs.

Now, I know that we have an eclectic readership. Some of you really do enjoy slow moving foreign art films. Some Iâ€™d be surprised that you are still reading. But if you prefer adventure or would rather watch art films instead of BE in them, here is a tip. If you ever sail to Cherokee Point in Abaco, once you anchor, look north, you will see a long pier extending far into the water. Motor your dinghy to the pier, tie up, walk down the pier to the shore, and make a left to leisurely walk to town.

One thought on “April 8 — Cherokee Point”