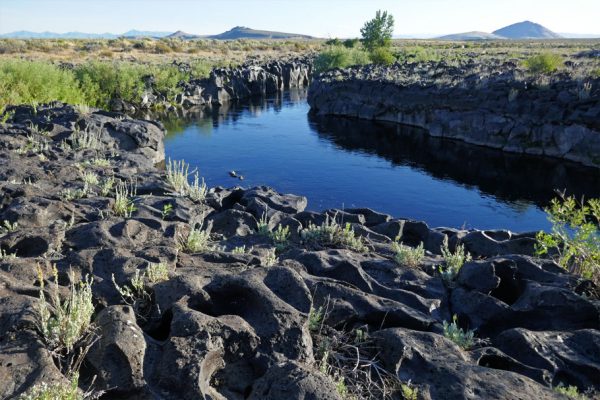 Black Magic Canyon, north of Twin Falls, ID. As Idaho traveled west parts of its crust narrowed, leaving magma closer to the surface. When Black Butte erupted, 1.5 miles to the west, lava covered 100 square miles. Since then quartz and granite have washed down from the nearby mountains polishing the softer volcanic basalt.

Yellowstone has stayed put, but Idaho is on the go.

It has taken 15 million years, but southern Idaho, which is part of the North American Tectonic Plate, has moved westward over the volcanic hotspot we now call Yellowstone. This movement has left a 70-mile break in the normal north/south basin/range pattern seen throughout the western US.

The Yellowstone volcanic hotspot poked holes through the skin of Idaho as it passed over. We looked at some of these earth zits in our travels. The slow crawl over Yellowstone also left gaps in the Rocky and Cascade mountain chains. These gaps allow moisture from the Pacific Ocean to pass freely to Yellowstone, dramatically enhancing the effects of subterranean heating. (But that’s a later post). 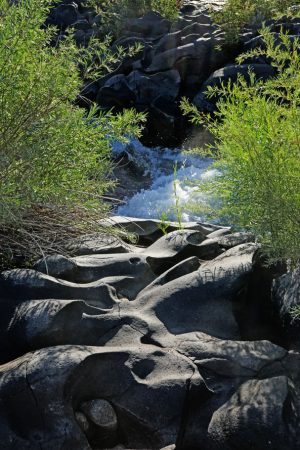 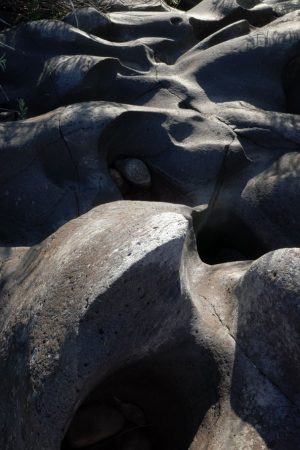 East of Black Magic Canyon is the Craters of the Moon National Monument & Preserve. Early settlers shunned these badlands. Then in 1923 geologist Howard Stearns reported that they looked like “The surface of the moon as seen through a telescope”. The area was named a National Monument in 1924. 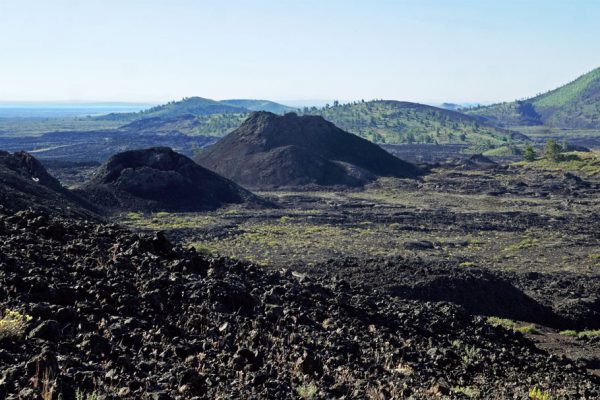 Ironically Craters of the Moon doesn’t sport a major volcano. Most of the lava here oozed up from a series of fissures known as the Great Rift of the Snake River Plain. The two dark hills above are spatter cones. They are mini-volcanos. They ejected pasty lava which stuck together. 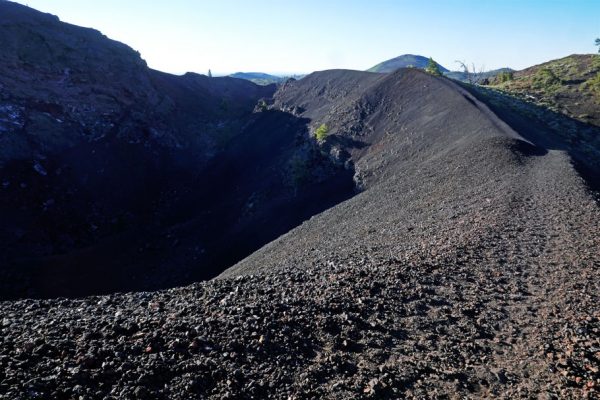 Here our trail goes atop the edge of a cinder cone. Lava with a high content of gas was spewed out here. The lava cooled into pumice pellets. 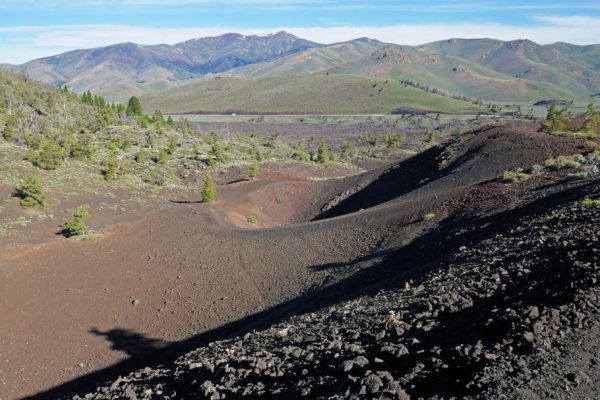 More cinders at Craters of the Moon. The verdant Pioneer Mountain Range is in the background. 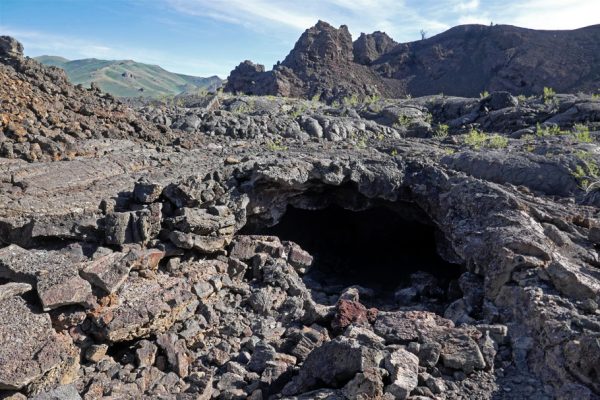 The lower foreground shows the opening of a lava tube. Surface lava cools over stream of molten rock, leaving a tube when the hot lava recedes. 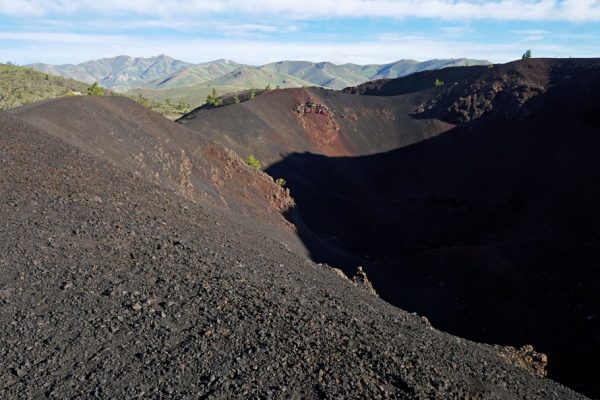 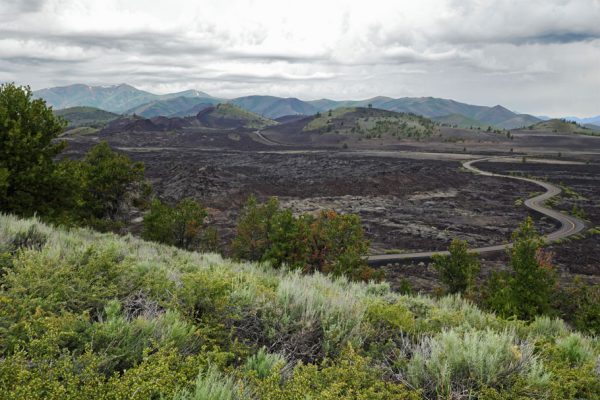 In the center is the Big Sink. Here the surface of a lake of lava cooled. After the hot lava receded, the cooled surface collapsed. 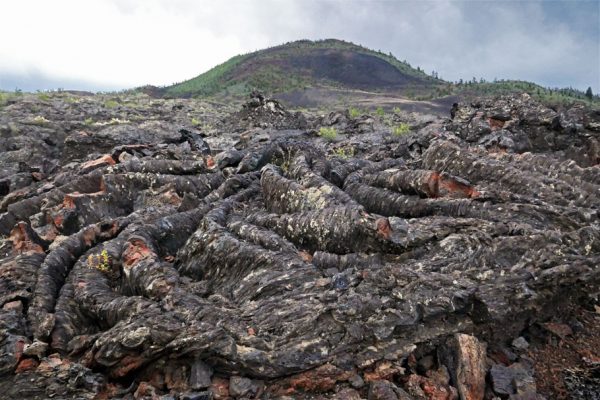 Pahoehoe lava in the foreground. “pahoehoe” is Hawaiian for “ropy”. In the background is a kipuka. Kipukas are islands of vegetation in a lava field. Plants have grown over this older volcanic structure, which is surrounded by younger volcanic rock. 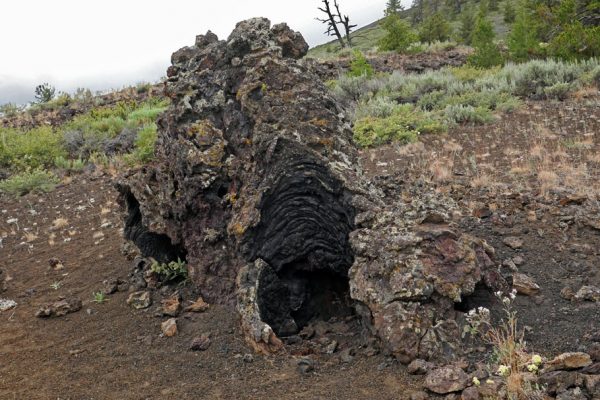 Tree mold lava flow. Lava here oozed up from under trees cooling around their trunks. The two tree trunks are gone but their shape remains. 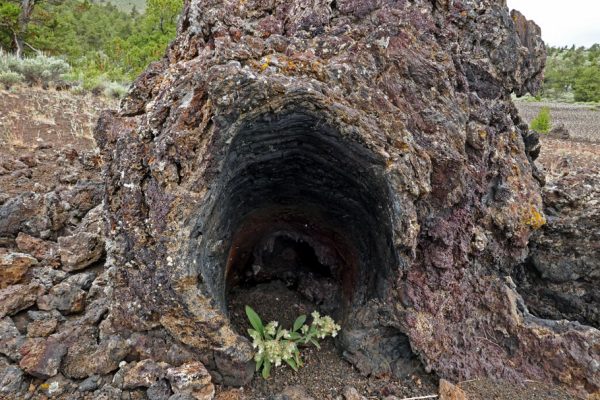 Looking down into another tree mold. 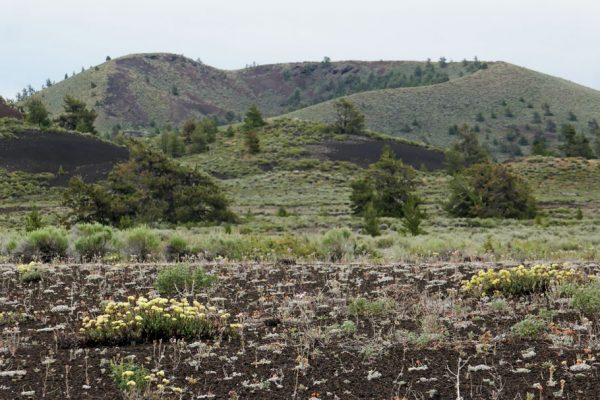 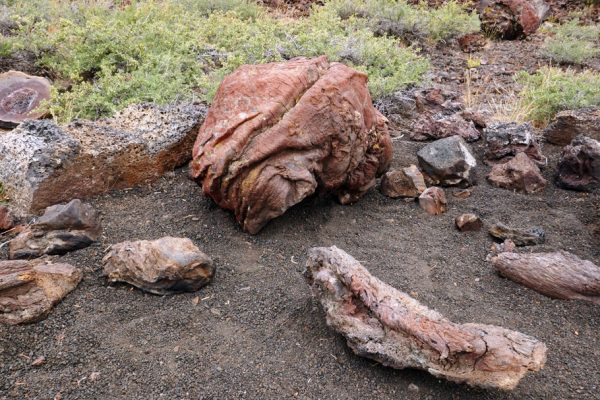 Lava Bombs! These large blobs of lava cool quickly when ejected into the air. Some weigh as much as 100 pounds. 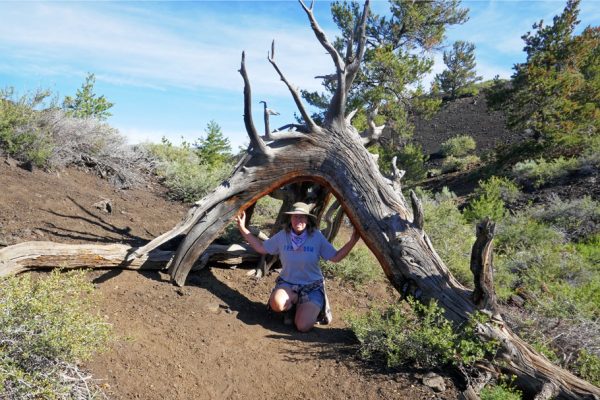 Navigator and photographer extraordinaire, Duwan Dunn, poses under a fallen tree at Craters of the Moon National Monument and Preserve. 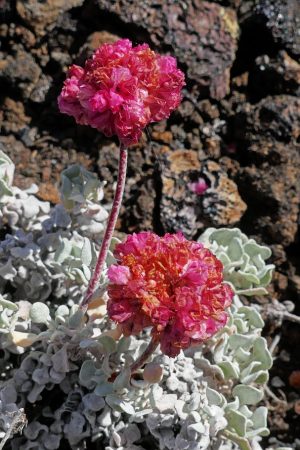 Cushion Buckwheat at Craters of the Moon. 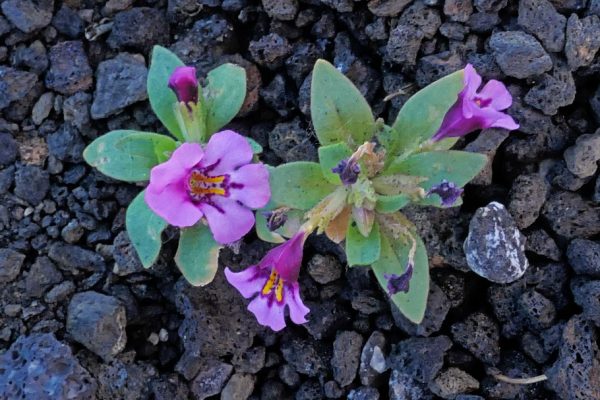 Dwarf Purple Monkeyflower grows in the pumice at Craters of the Moon. 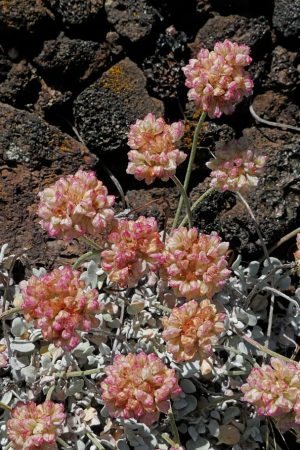 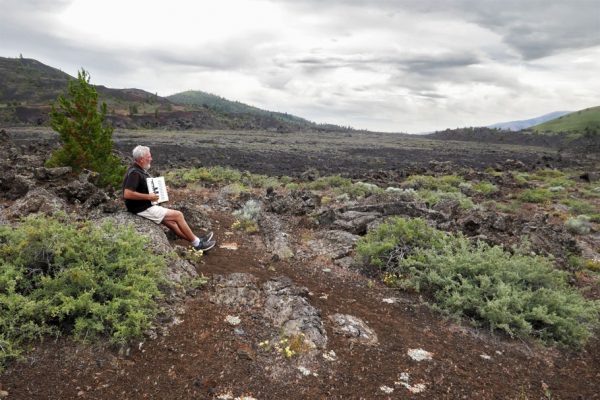 This desolate landscape doesn’t mind when you hit the wrong notes. 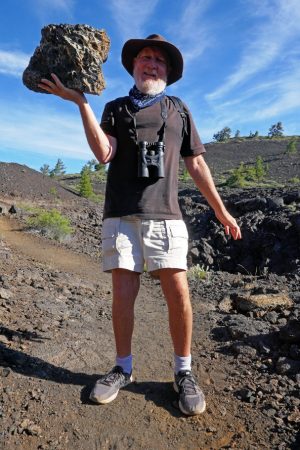 This rock must weigh a ton! Nope. It’s made of pumice and contains lots of tiny air bubbles. 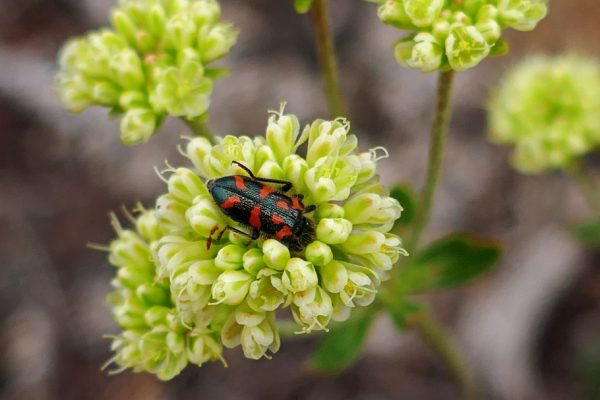 Here is a view from one of Menan Buttes. We are looking back west across the Snake River Plain. Far in the distance evidence of 15 million years of volcanic activity is found in Hell’s Half Acre, East Butte, Middle Butte, Cedar Butte, Craters of the Moon, Big Southern Butte, Picabo, Twin Falls, Black Magic Canyon, Bruneau Jarbidge, and Owyhee.

Looking down from the western rim of the larger of Menans Buttes into the crater. Menan Buttes were formed when volcanic ash was ejected into the air. Southerly winds caused more ash to settle on the northern sides of the buttes. 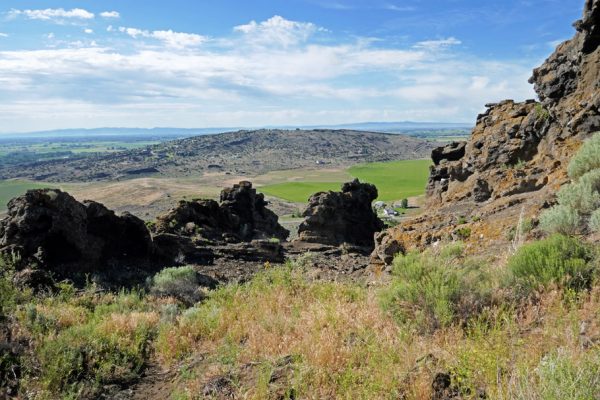 And wind over the years has eroded away ashy rock, leaving these interesting formations. 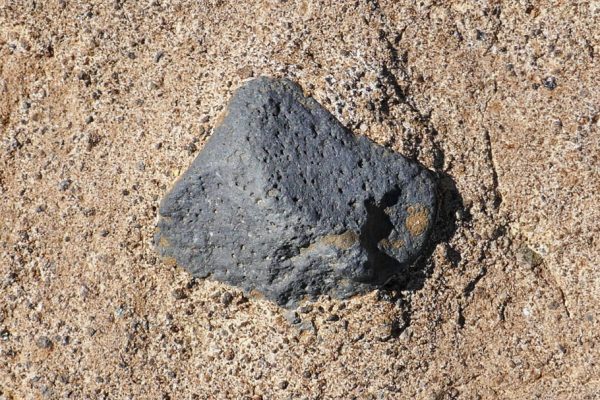 There was volcanic activity here long before the latest eruption at Menan. This rounded piece of basalt from an ancient volcano was probably lying in a riverbed when Menan last erupted. Many thousands of pieces like this are embedded in the more recent ash. 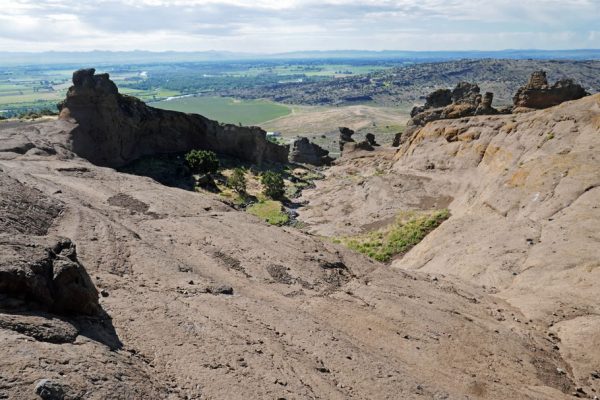 View of formations at Menan. 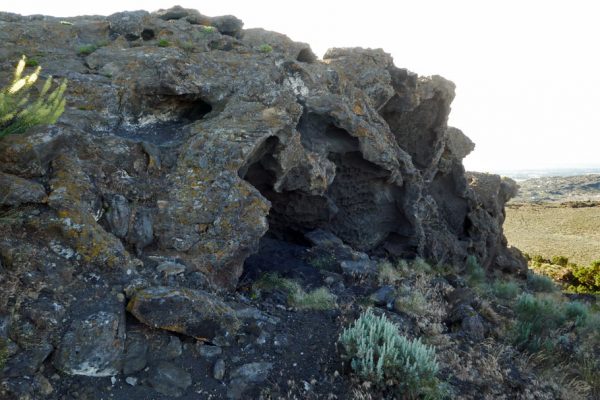 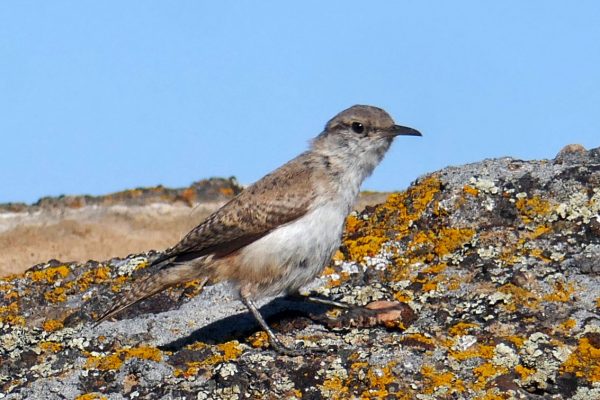 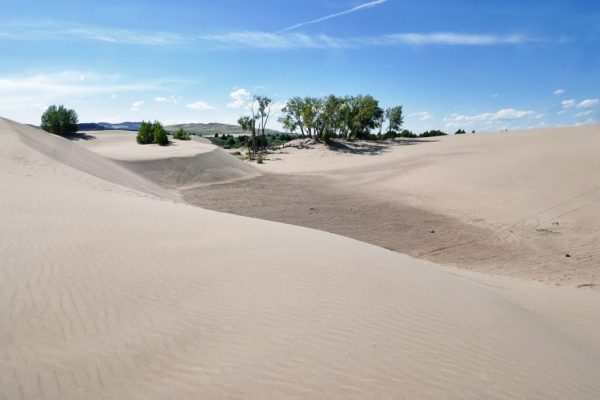 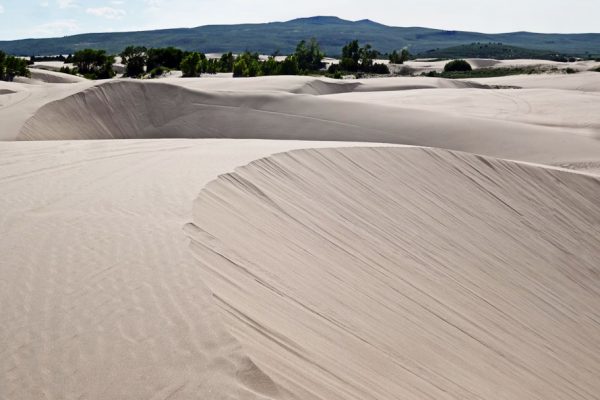 These dunes are composed of tiny grains of basalt and quartz.