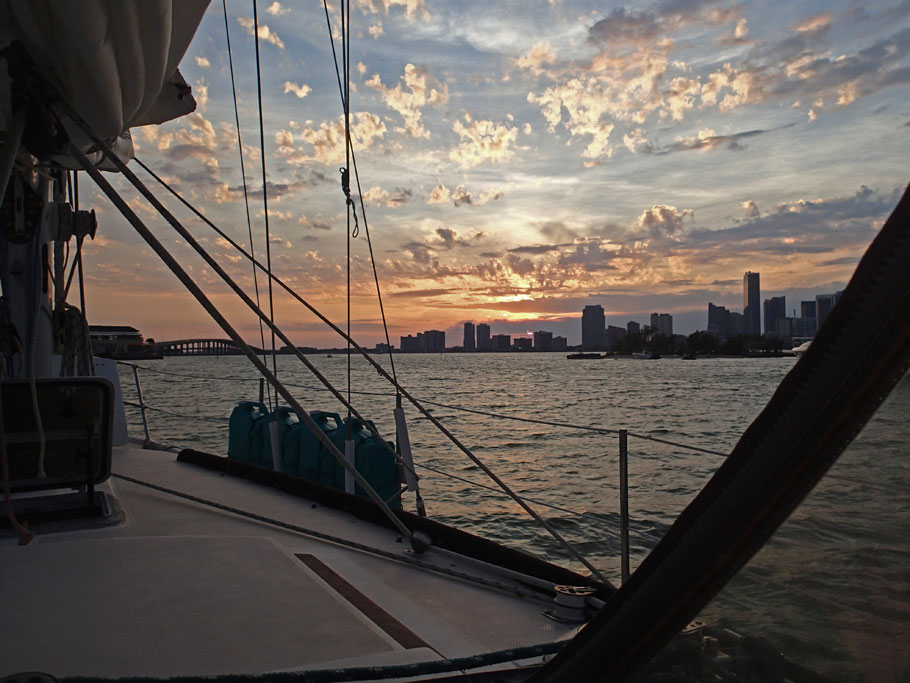 One last sunset in Miami.

There she stands, tall and still, the hot Indiantown sun beating down on her ash covered decks, a lonely breeze quietly whistling through her naked rigging. Spring, summer and now fall, she has stood side by side with her sisters and brothers, hibernating in an open field, waiting for the threat of hurricanes to pass and for us to return and shake her from her dormancy.

We had left Blue Wing in Indiantown in May after only 6 weeks on the water earlier this year. 2014/2015 had been a short season of sailing. After two weeks working on her on the hard, she spent most of the winter on a mooring ball at Sunset Bay Marina while we continued to labor through an extensive list of projects. During our 3 years of cruising quite a few things had broken and and some had just deteriorated. But the itch to keep moving couldn’t keep us in one place for too long, finally, upon completing a few major projects, we decided to take our chores on the road (water) and motor her down to Miami to clear off the rest of our list.

We cut the season short when the list started to get longer despite striking many things off and work opportunities started to present themselves in Cabbagetown. We put her up and rushed back to Atlanta. I had meant to write a wrap up post to our working season, but life on the dirt started moving fast and the blog got neglected.

So hereâ€™s the wrap up…

Our original chore list was long and we didnâ€™t get to address everything on it. We didnâ€™t lube the winches, sew a new bimini, sew a new life sling bag, replace the dodger windows, or touch up the paint on the binnacle, but we did scratch off a few things, a few of them pretty major projects:

But while we were out, even more things broke.

Just about anything that was or had to do with a pump broke:

We also had energy problems:

And we had a few other issues:

If you do the math for 6 weeks, you will see that is roughly 1 Â½ things breaking every week. Ugh.

But we did have some fun and improved many of our sailing skills. Our friends David and Michelle came to visit us in Miami and I think they had a good time. We did. Since we had visit marinas so often to pump out we got much better at docking the boat. We also spent a lot of time picking up mooring balls which we are pretty darn good at now. And of course, I got to move the boat completely under sail off the anchor, under a bridge, and on the anchor again.

Currently we are getting ready for a big adventure, sailing to Mexico, Belize and Honduras and back. A lot of the projects we didnâ€™t complete this past winter are now done, we have also addressed many of the things that broke this winter, have completed a major cosmetic project, and are working on upgrading our equipment for our big trip south.

But before we get to telling you about all of that we are going to do a little blogging about our summer. So, stay tuned, while we get the blog up to date! 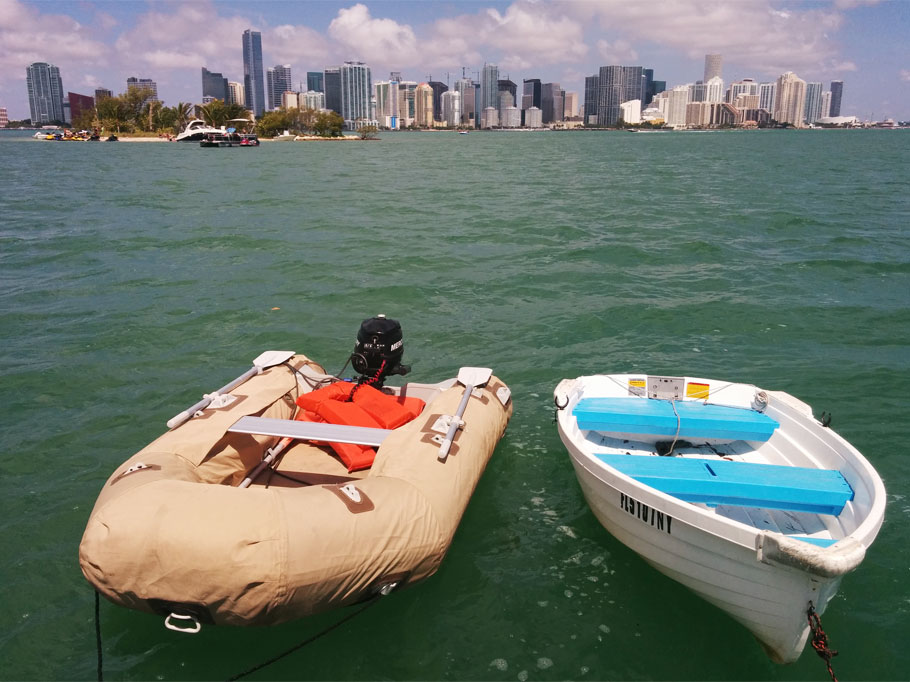 View of Miami and one of our completed projects, dinghy chaps for Jethrine! 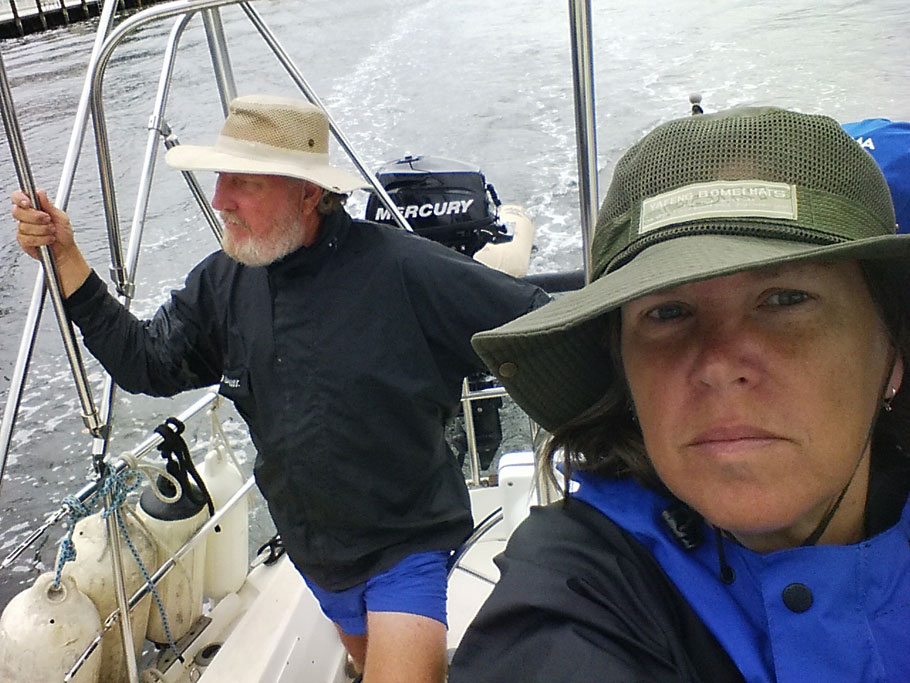 Our trip back to Stuart was wet and dreary. 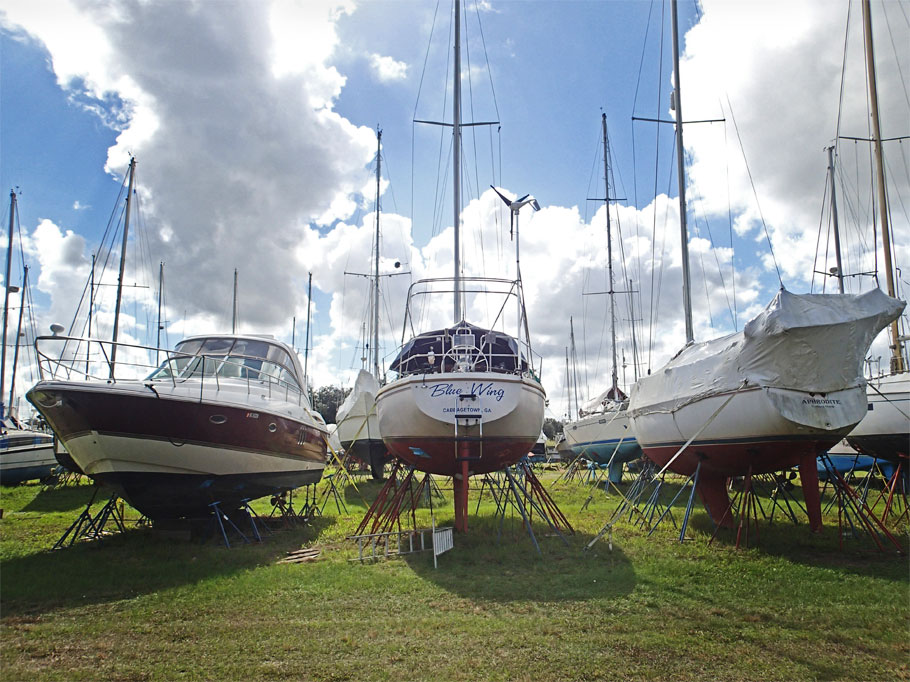 Blue Wing in the storage yard at Indiantown Marina, awaiting her return to the water.