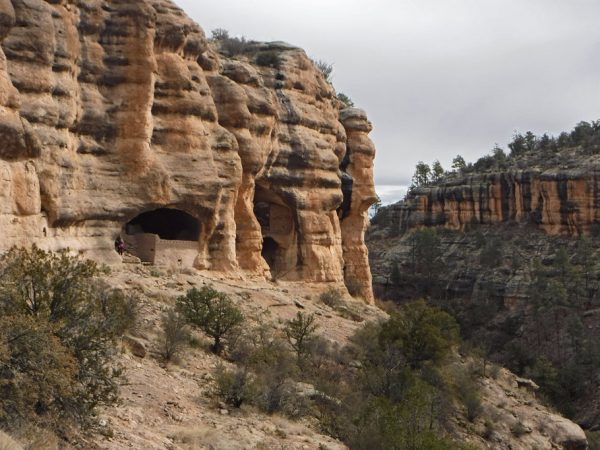 After leaving Chiricahua, we went to a visitor center in NM. We learned that the Gila Cliff dwellings were nearby. They are almost invisible on the trail leading up to them. Here, high up the trail, is the first vantage point.

This post is a Widdershins Wednesday — which means we are turning the hands of time backwards and catching up on our travels we didn’t get a chance to write about last year. In this post we are turning back the clock to right after we left Chiricahua National Monument…

Our trip through Southern Arizona visiting The Coronado Forest, Tumacácori, Tombstone, The San Pedro Riparian National Conservation Area, Bisbee, Whitewater Draw, The Chiricahua Mountains, and Chiricahua National Monument, although truly wonderful and fun, was really all about killing time while we tried to stay warm. Our real destination was Chaco Canyon in New Mexico, a complex of Native American ruins in the southwest corner of the Colorado Plateau. I had visited Chaco 30 years ago and left there in complete awe. I wanted to share that awe with Greg, but it was too cold for us at Chaco in February. Of course, we knew it would warm up, so I plugged Chaco Canyon into my weather app and checked it daily ( 28° over night – tooooo cold, 33° – better, but not good enough) as we traveled through the warmer lower part of Arizona.

When we left Chiricahua Nation Monument, I checked my app once again. In 5 days time it would be 44° over night at Chaco. It was time to drive into New Mexico and start creeping our way north. 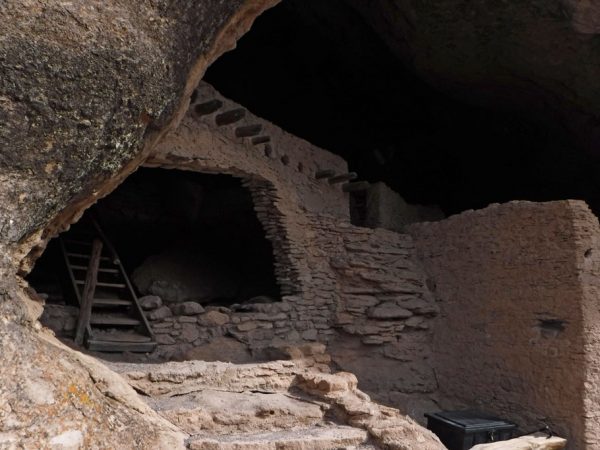 “I was born near the headwaters of the Gila River”. This is a quote from the Apache Geronimo. But while his people may have stayed here, they did not build these. They were built in the late 1200s by the Mogollon people, who moved on soon afterwards. 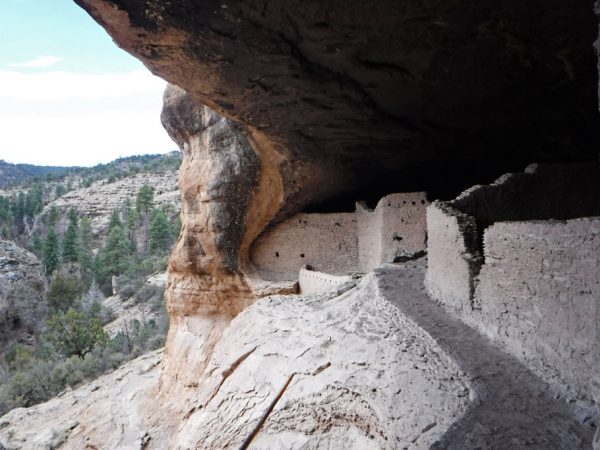 By 1884 the caves had been looted and the roofs burned (probably for campfires). An estimated 80% of the remaining structure is original. (Greg thinks that the Mogollon moved on after losing too many children over the side.) 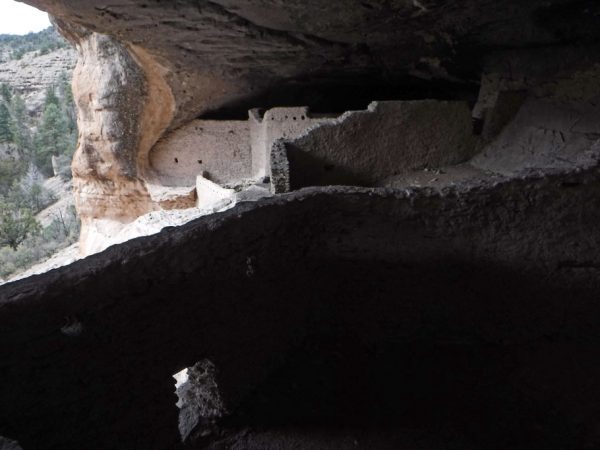 Smoke residue deep in the cave suggests it was used as shelter long before the structures were built. 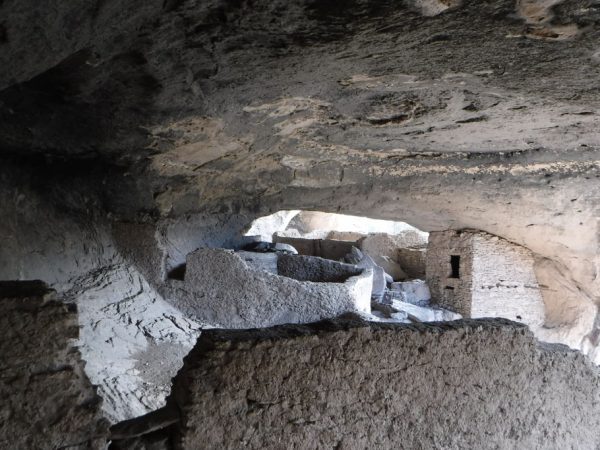 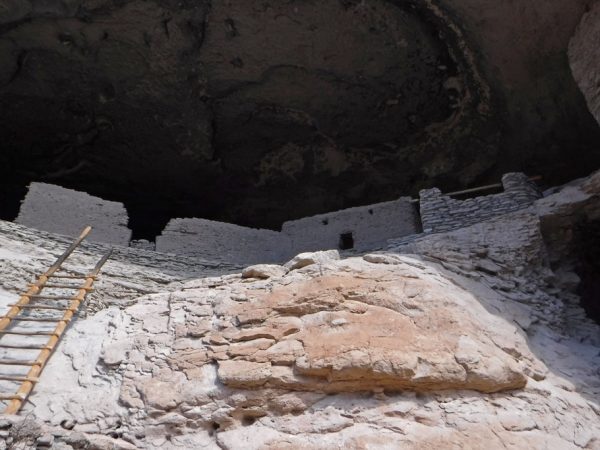 Cliffside ladders were used (and still are) to go from one level to the next. 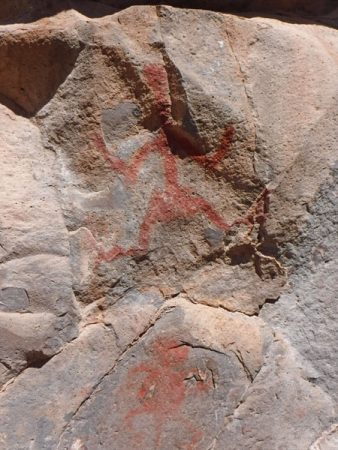 Down another trail at Gila is a small dwelling built into a cliff. These pictographs are on the trail. 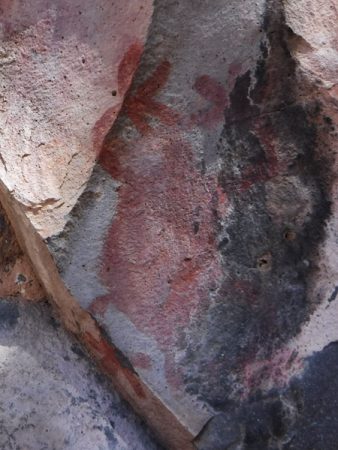 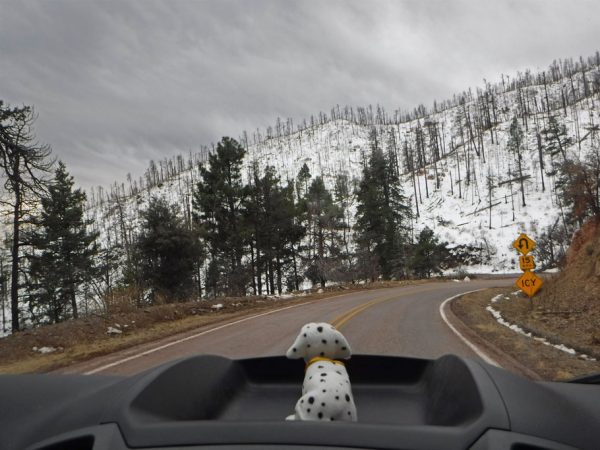 Crossed mountains to go northeast to Albuquerque. Bob enjoys seeing the snow, but he’s not so sure about the tight, icy turns. 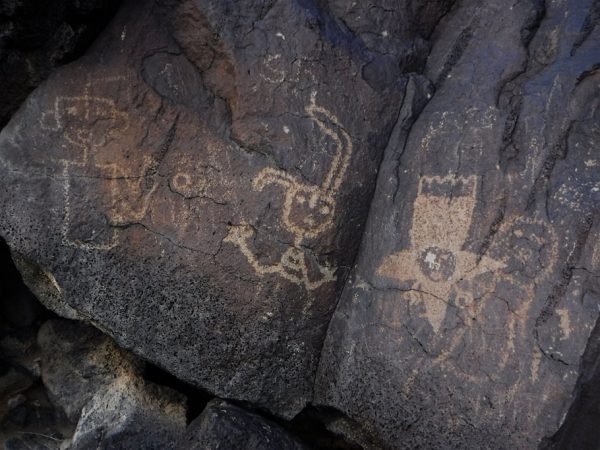 The Petroglyph National Monument is just outside Albuquerque. We couldn’t miss that. 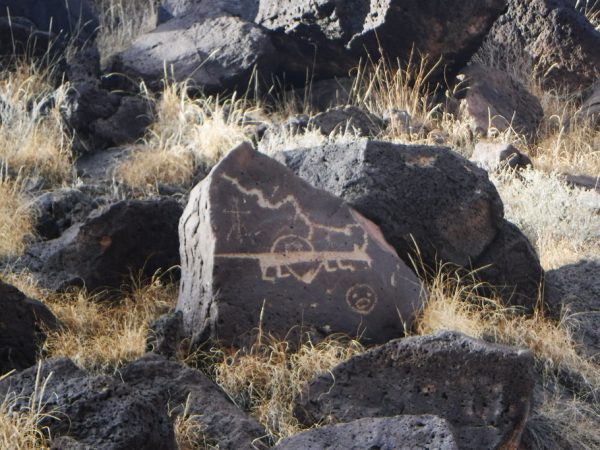 Love seeing these ancient figures etched into the desert varnish. What do they all represent? 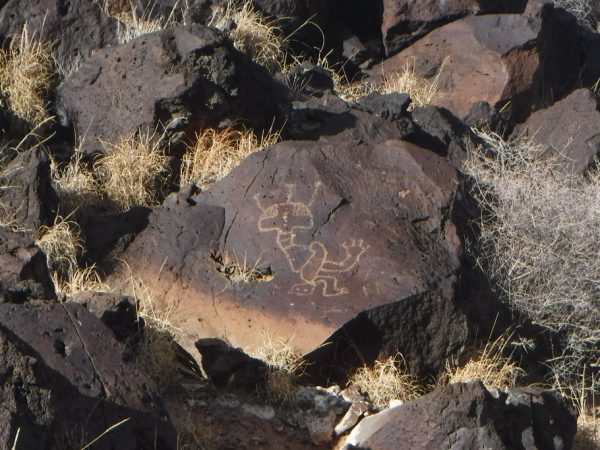 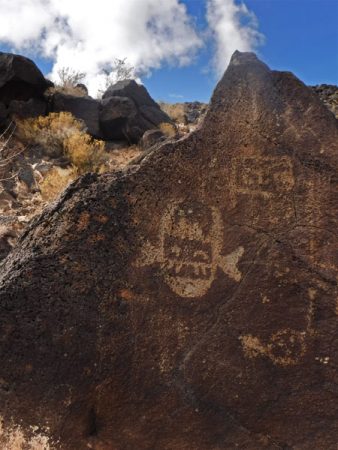 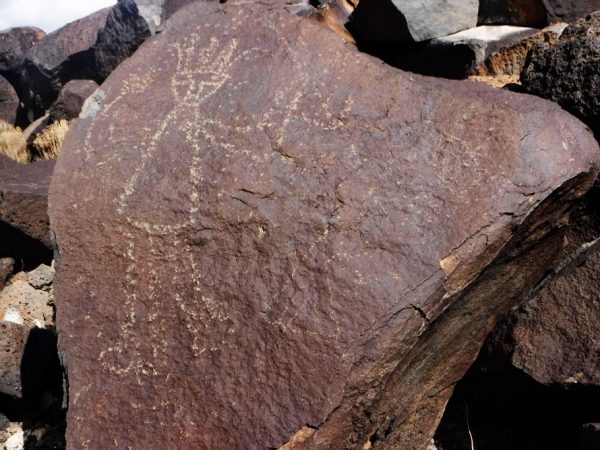 Definitely a person in some kind of headdress. 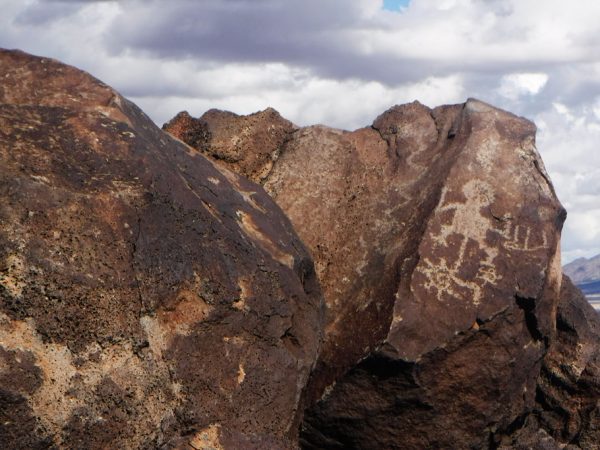 Was this one done by a satisfied woman, or a really, really confident man? 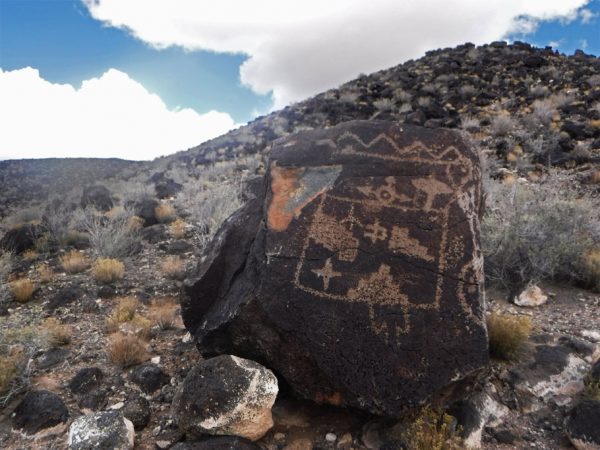 Lots of these are abstract. 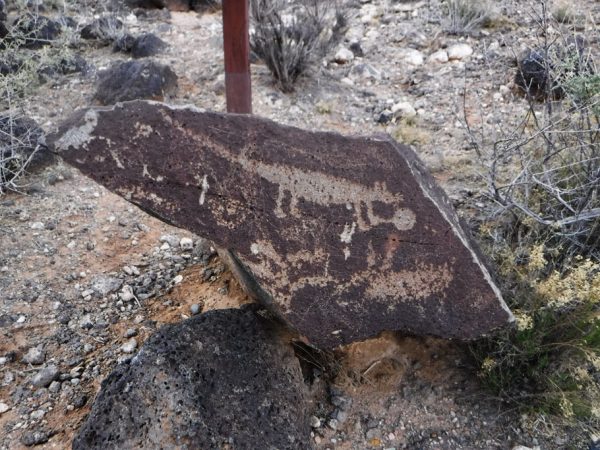 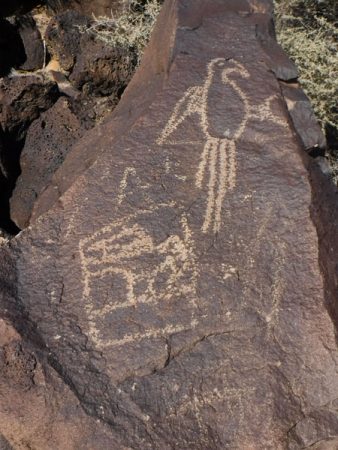 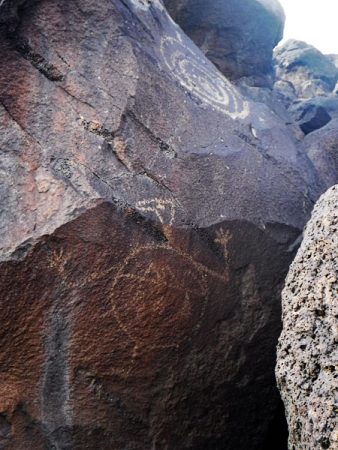 View looking down from the trail at Petroglyph. You can see how close the Alburqueque suburbs are to the monument. 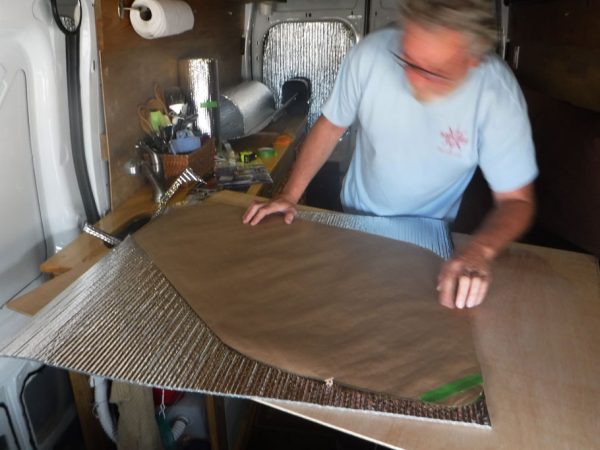 While in Albuquerque we decided it was time to fashion some Reflectix window covers. 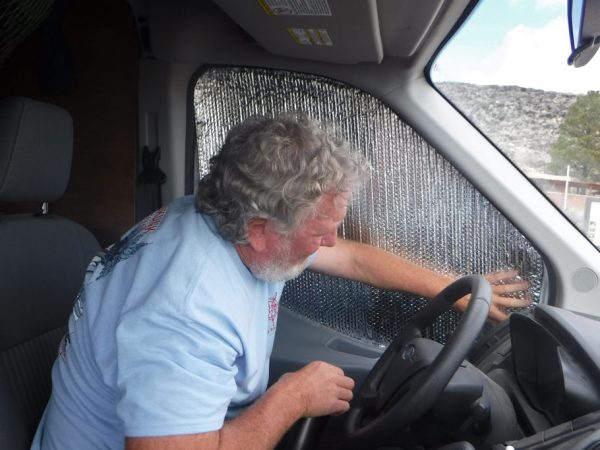 Up to now we have been hanging sheets at night. One on a bungee strected across the back doors, and one just behind the front seats. 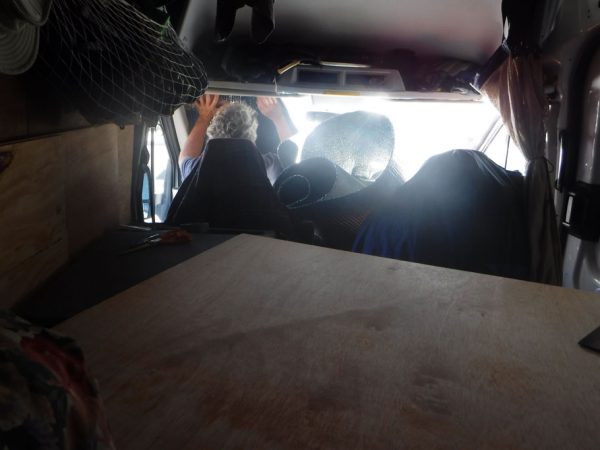 Covering the individual windows at night will make the interior seem bigger. The Reflectix should provide some insulation. If we put the covers on during the day, the van won’t get so hot. 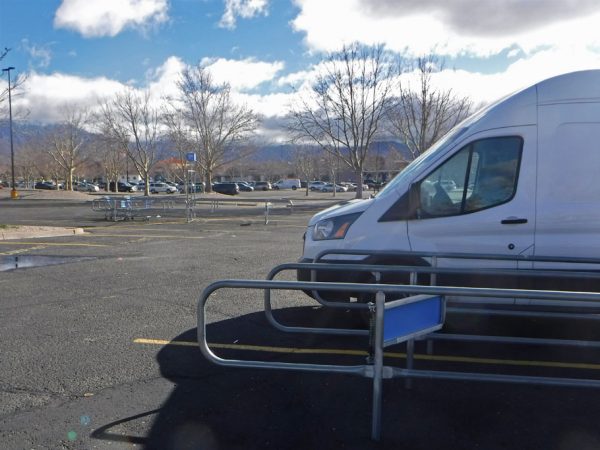 Our first night in a WalMart parking lot. Many WalMarts allow overnight camping. It’s a good idea to check ahead and make sure, though. You can meet interesting people here. Experience has since shown us that some campers just bounce from one WM to another. Some even stuff their clothes with WM bathroom toilet paper to sneak it out.