View from our digs in Guanajuato. Here at the Casa Estrella hillside villa resort you can look out over the city. Rooms and pool are up the hill behind us. We stayed in the parking lot downhill from the tennis court below.

Mexico has a fascination with the dead. I was already familiar with the Day of the Dead celebrations in Mexico and the souvenir ceramic figurines of skeletons doing various jobs and dressed in different costumes you can buy in border towns. It was a delight to learn about the skeletal Katrina figurine and find out there was a whole town dedicated to making some of the most beautiful ones. The ubiquitousness of roadside memorials to those suddenly departed was a bit of a surprise – especially the permanent and elaborate ones that you can walk into and could easily accommodate a hip tiny house couple. But what I’ve really found interesting is all the skeletons in archeological museums.

We have been to lots of archeological sites in the US and a few of them have had museums and I can remember pottery and tools and reconstructions of living areas and information about day to day life of the first peoples to populate this continent, but I just can’t remember anything about them being dead. But every museum I have been in Mexico has a display of how people were buried – skeletons side by side, in fetal positions, with their prized possessions, with their poor skeleton dog. There are displays you walk over, some you have to walk down into, and some you have to lean over one person at a time to catch a quick glimpse of some bony corpse. I don’t know if the bones are real, but the displays are presented as authentic representations of how they were actually found.

And then there is Guanajuato. This city has taken this macabre fascination with death to another level. From what I understand way back in 1865 the city decided to tax mausoleums. When citizens didn’t pay the tax, the cemetery simply disinterred their loved ones – upon which they discovered that the corpses had not decomposed as expected but had become mummified. These poor souls frozen in time would eventually populate the Museo de Momias – a bizarre and somewhat unsettling display for which Guanajuato may be best known.

Of course, when we visited the museum I paid the extra 30 pesos to be able to take pictures, yet realized almost immediately as I was snapping away that they might be a bit too disquieting to publish on the blog — so I have created a special link for those curious souls whose interest may be piqued. Click here for pics of Las Momias!

Besides the mummies, Guanajuato is a treasure – to see and learn about the less gruesome side of this fascinating city keep scrolling for more pics.

* Click pics to enlarge and/or view in a slideshow. 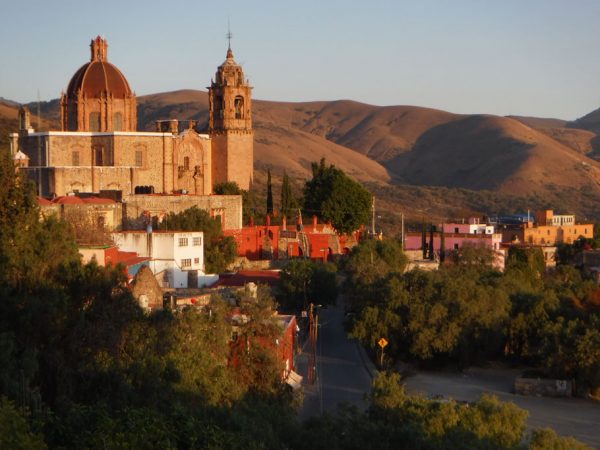 The section of town we stayed in was called Valenciana. Here is the Catedral Valenciana. There are many tiendas (shops) around the church. 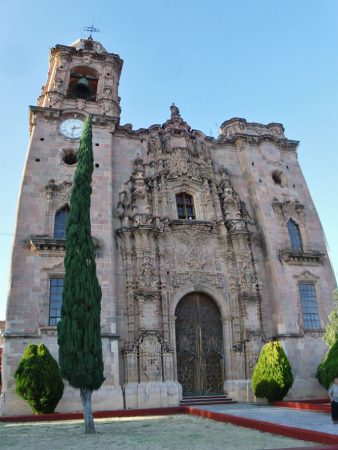 Facade of the Catedral Valenciana.

Looking down into colorful Guanajuato from the west.

View of Guanajuato from the south. From the center of the city it is a very steep climb up narrow alleys to get here. 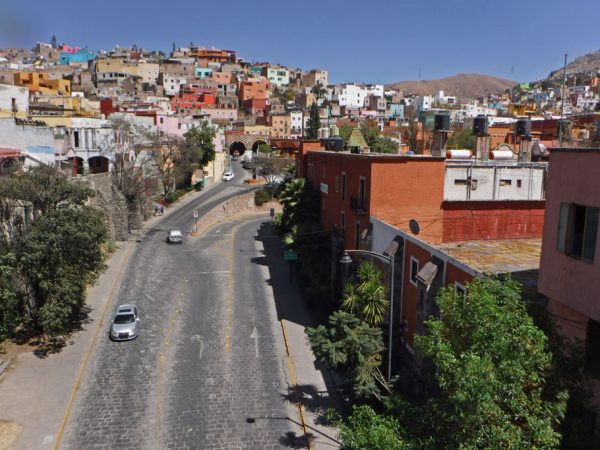 Guanajuato exists because of silver mining. The Spanish started mining here in 1520 and two mines are still open. It’s a 3-D city with streets that were once mining tunnels. Here you can see cars coming toward us out of one of the many tunnels. 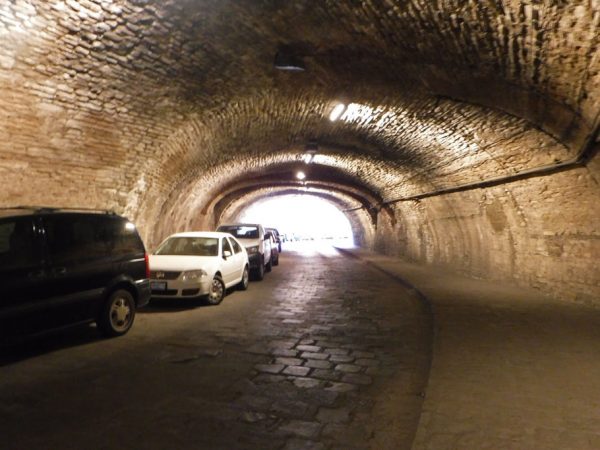 Inside one of Guanajuato’s tunnels. A GPS app can help you with directions, but at first glance you don’t really know if it will be sending you underground. 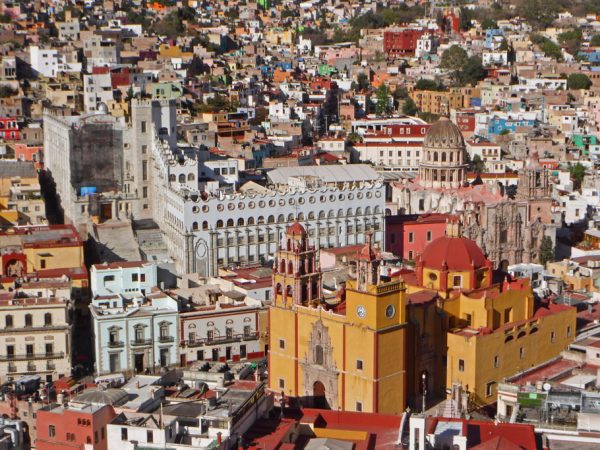 Looking down over El Centro. The prominent white building is part of the University of Guanajuato, which has over 33K students and can trace its roots back to 1732. The yellow building is the Basilica Colegiata. 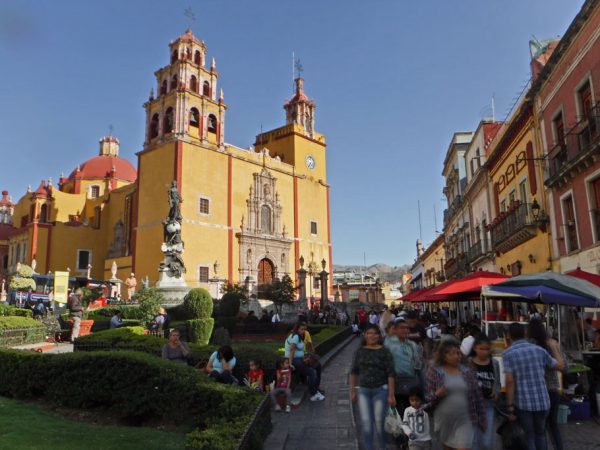 Guanajuato is a top tourist destination, but not necessarily for gringos. The locals have no need to learn English to pander to northern turistas. 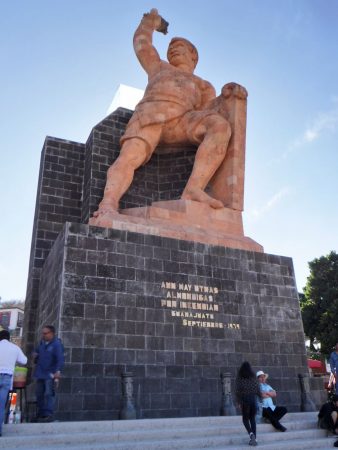 Monument to local hero Pipila. In 1810, at the start of the war of independence from Spain, Hidalgo’s troops were trying to capture a stone-walled granary where the Spanish were hiding along with their treasure. Miner Pipila strapped a flat stone on his back to repel Spanish bullets, stormed the wooden door, and set it ablaze, allowing Hidalgo to score his first victory. 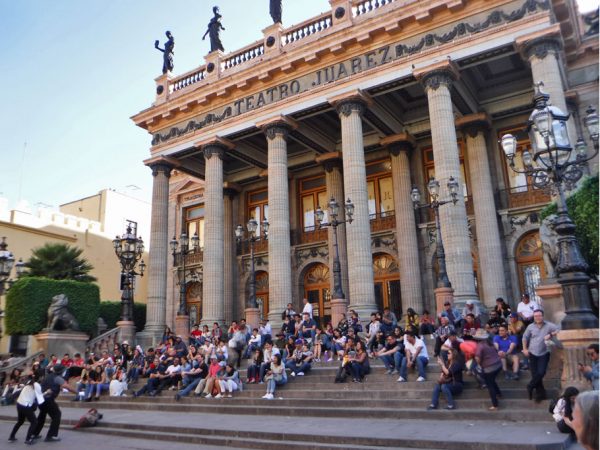 Comedian entertains people resting on the steps of the Teatro Juarez. Outdoor humor is often physical. He has pulled a “volunteer” from the crowd. She must lean with him as he mimics speeding through the streets on a motorcycle. (Heck, the humor is probably verbal, too. We’re just not fast enough to catch it.) 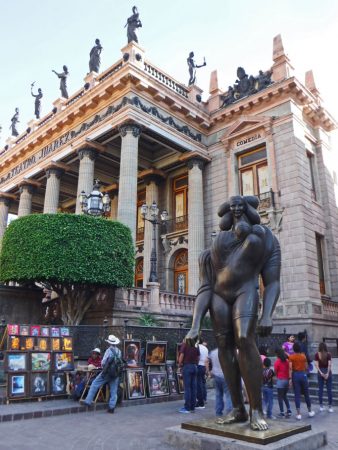 Sculpture and vendors in front of Teatro Juarez. 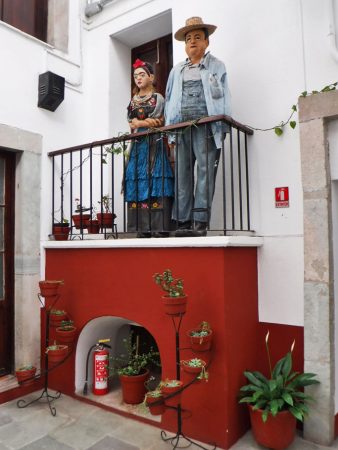 Frida and Diego look across the room at one of Diego’s murals. Diego was born and spent his childhood in this house. It is has been partially restored and is now also a museum which has many examples of the different phases of his artistic development. 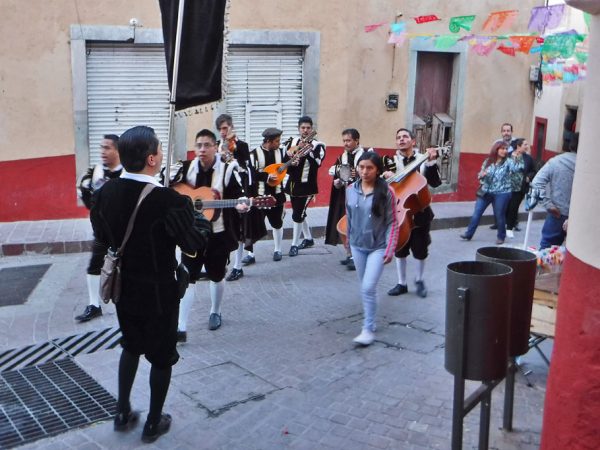 A group of estudiantinas, minstrels in midieval costumes, starts their parade through the streets. Tour groups follow them, joining in on the rowdy songs. 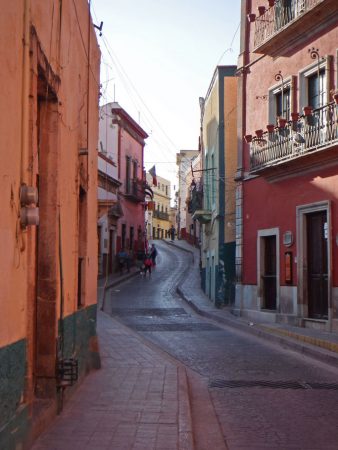 And the streets! People of Guanajuato love walking the unique streets of their town so much, they have created a verb for it: callejonear. Vamos a callejonear. 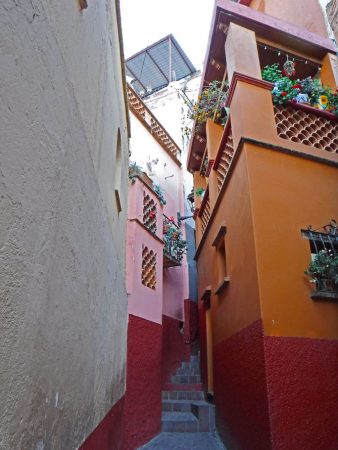 Many of the streets are quite narrow; especially this one, Callejón de Beso. 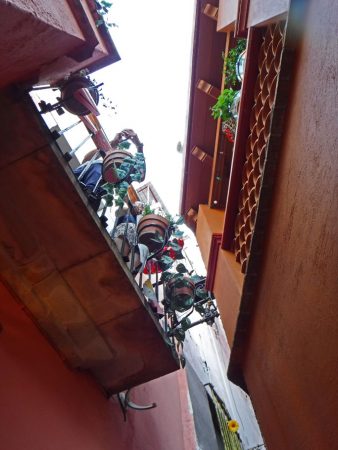 In the Callejón de Beso, or alley of kisses, these balconies are close enough to allow neighbors to lean over and kiss across the street. (We think we heard that these are AIRBNBs now. 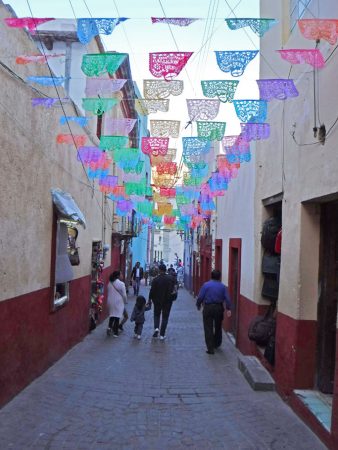 Even in the smallest, poorest Mexican towns flags get draped across the street advertizing the next big celebration. 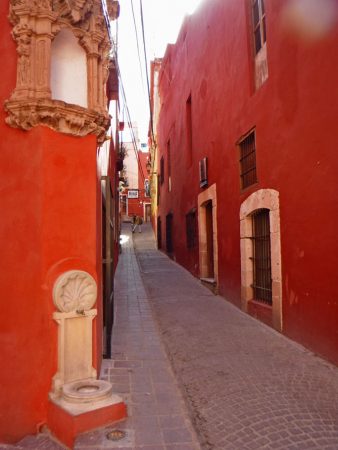 Guanajuato is considered Mexico’s most Colonial city. It has been an UNESCO World Heritage site since 1988. 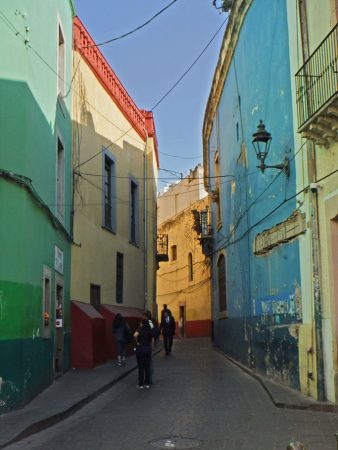 You would really rather walk or ride a scooter here than try to drive the streets. 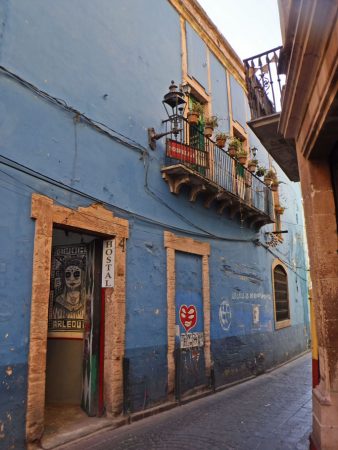 In El Centro there are many small hotels. 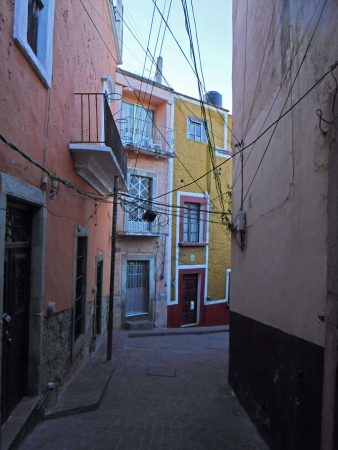 Even 16th century towns need to be wired to the world. 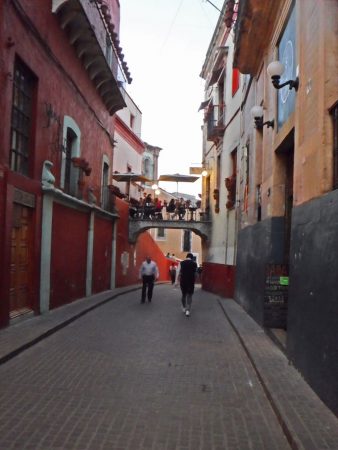 You have to make space wherever you can. This restaurant offers seating on a bridge over the street. 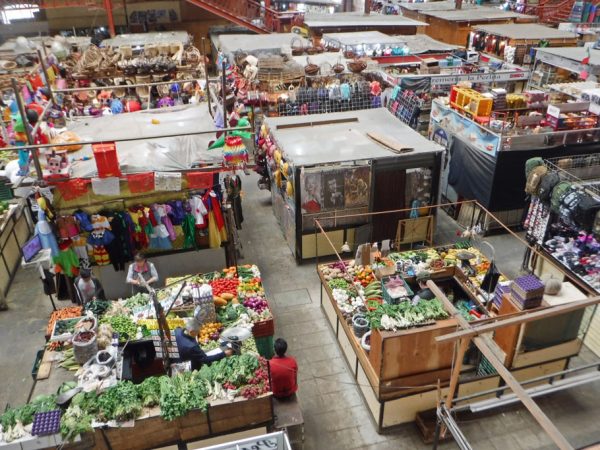 And of course there is a mercado. We had a really good lunch in this one. 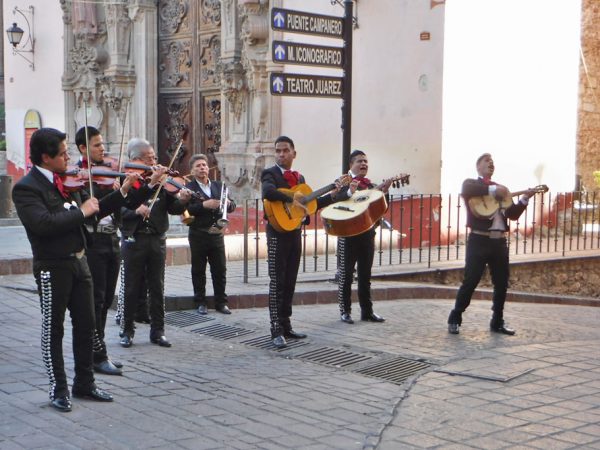 Mariachis serenade a balcony above. 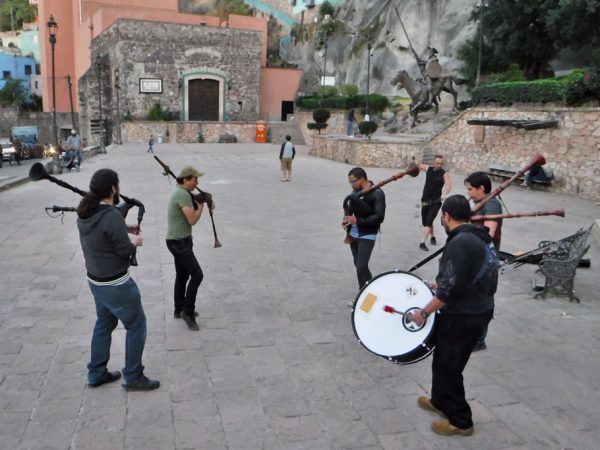 But why go to Mexico if not to see bagpipe players? These guys were very punk. And they played for fun, not tips. Behind the players is a juggler. Behind the juggler is Don Quixote with a lance. Behind him is Sancho Panza. 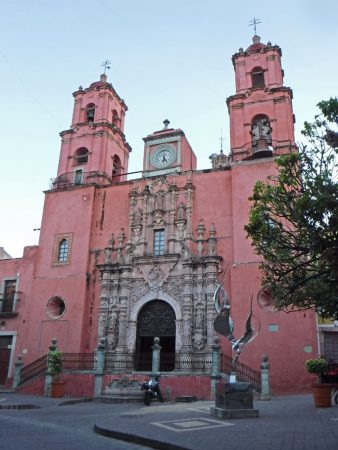 Sculpture in front of church facade in El Centro. But… speaking of Don Quixote, this city is crazy about his creator, Cervantes. Each year there is a festival featuring his short plays. Guess we’ll have to come back. 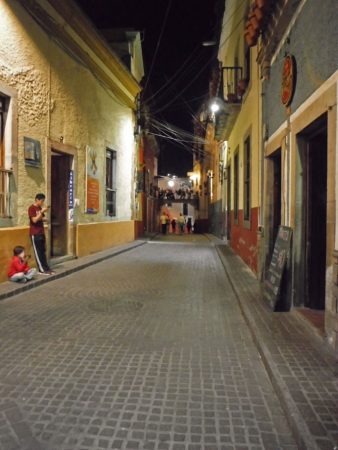 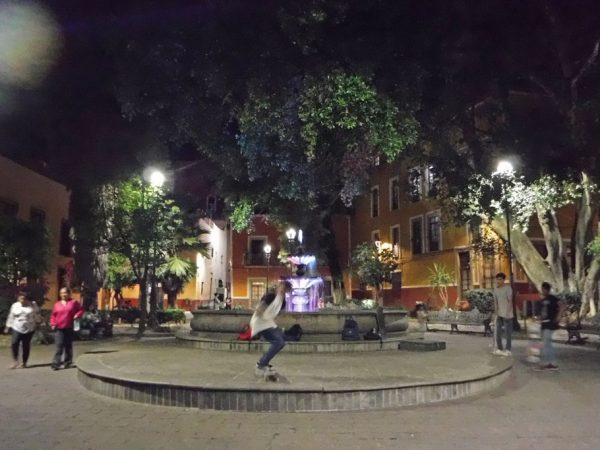 Skateboarding in the plaza. 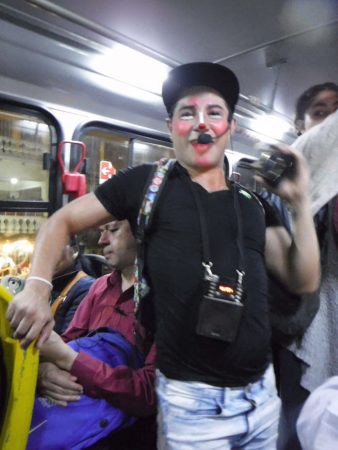 “Amigos!” We are greeted by a comedian as we crowd onto a bus in El Centro. At first his rider-audience looks a bit grim. By the time we get to Valenciana, though, they are all laughing heartily.