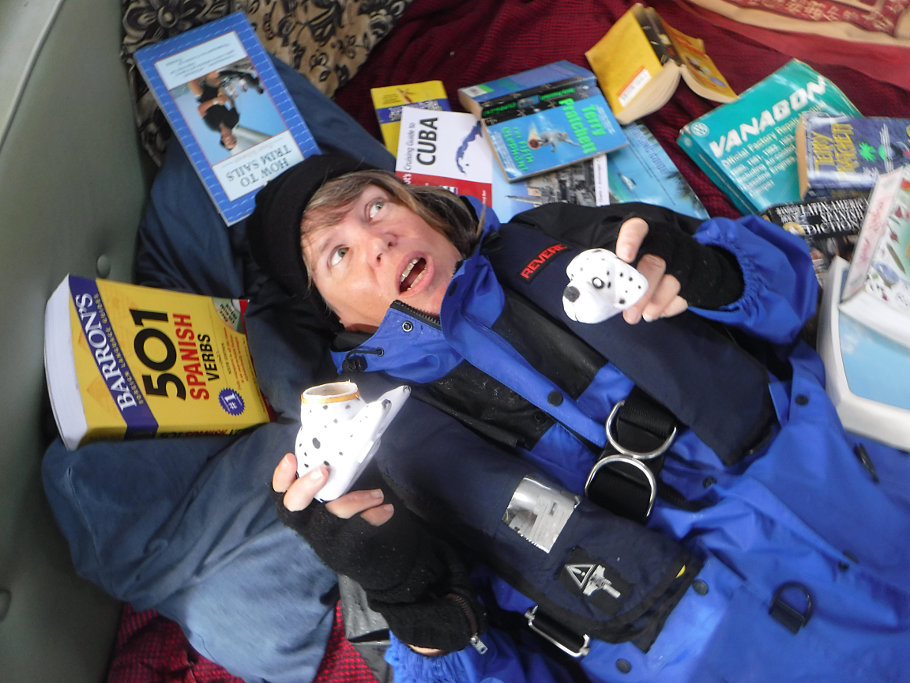 Reenactment of conditions in the salon. Of course it was dark then. No animals were hurt in the process of recapturing this setting.

In which: We Heave Too Hard, Engine Sucks Wind, Bob Loses His Head, and “Crab for Breakfast? No Thanks, I’ll Have Beer Instead”

Yesterday’s post found Blue Wing’s crew in the Gulf Stream 75 miles southwest of Key West and 40 miles north of Cuba. Thirty hours into their passage to Mexico they were motor sailing at four knots with sails tucked in tight. Waves were a calm two feet and five seconds apart. Skies were partly cloudy. They just had a chat with the USCG. Then, as Duwan went below for lunch, they were unexpectedly slammed by a huge wall of fast moving wind!

Suddenly, the seas churn and tall waves come from all directions. The howling wind blows spume off the wave tops.* Blue Wing heels over immediately. I steer left, into the wind, but she still heels. We climb a huge wave and are slammed into a heave-to position, with the headsail tied to the windward side of the boat. Now we are heeled far over to port. Duwan comes up to take the helm. **

First we let out the mainsail. Then we “complete the tack” by releasing the headsail and tying the jib sheet to the port (leeward) side. Now the wind is on our beam. We are heeled at a reasonable angle, but we’re pointing back toward Key West. We take a minute to catch our breath.

We tack back to a beam reach. Now we are sailing in the right direction. When I check the sail trim I notice that the angle of the luff (leading edge) of the headsail looks strange. I tell Duwan we should check this when things calm down.

Well, that was quite a shock, but now we have wind! We turn off the engine. Duwan goes below to finish her lunch.

The waves seem to be settling into a pattern now. Still 5-10 feet and a second apart, but coming from the southeast. Snap! The headsail and forestay drop into the water. Duwan comes up to steer. Again.

Two things hold up the headsail. Primarily, a forestay cable which runs from the bow to the top of the mast. Then a halyard line is used to raise and lower the sail along this forestay. Our forestay-to-mast connection had broken, probably when we hove-to. After that our headsail hung from the halyard alone. The halyard could only sustain it for a few minutes before it tore apart.

This was a bad situation. Not only because the sail was down. Now, our mast was supported on three sides, but not from the front. If we lost the mast we really would have a problem. We fell off a little to keep wind behind the mast. Then it was time for me to go forward and do some work.

These were not good conditions to be out of the cockpit. It was rough out there. I was constantly tossed in unpredictable directions. We have jacklines running down each side of the boat. And I was always tethered to one of them. Mostly though, I tried to slide on my butt or crawl to keep from getting hurled too far. Everything took a lot longer to do.

First I secured a spare halyard from the top of the mast to the bow. Now (hopefully) we wouldn’t lose the mast. 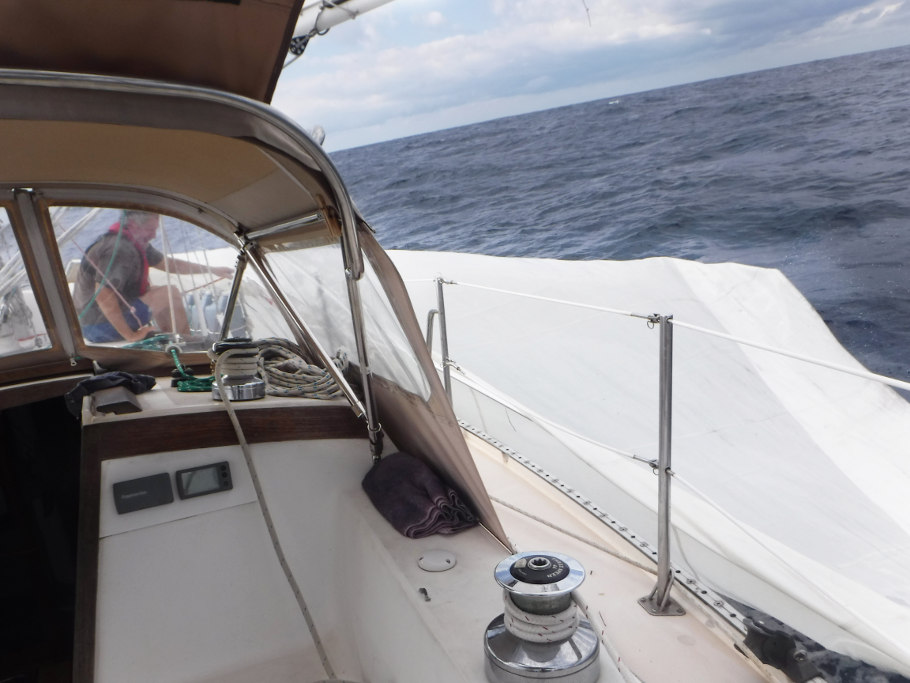 Greg starts to pull the sail out of the water and up on deck. 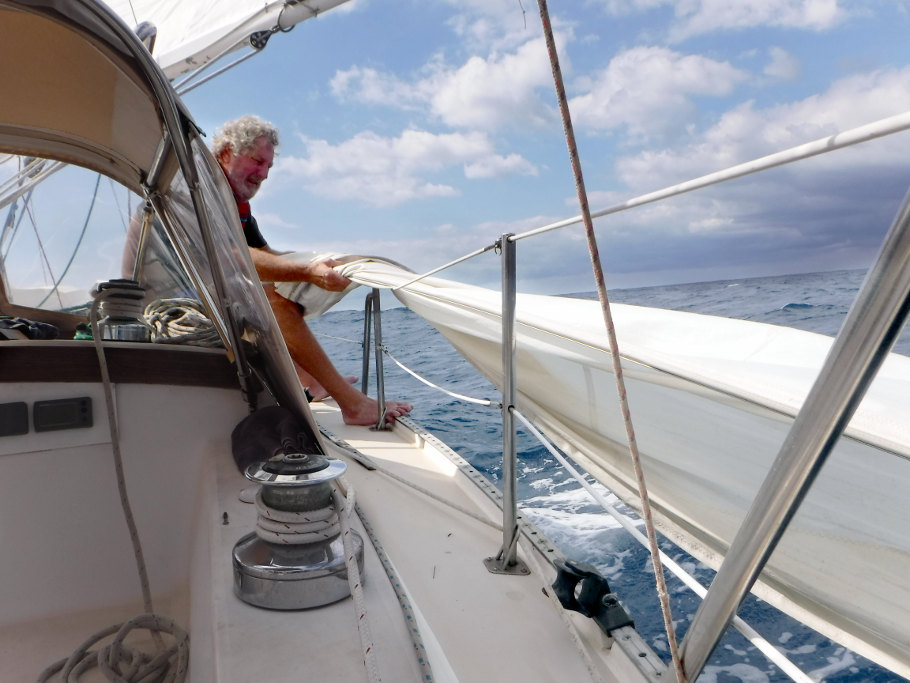 Scooting down the deck, Greg pulls more sail up. 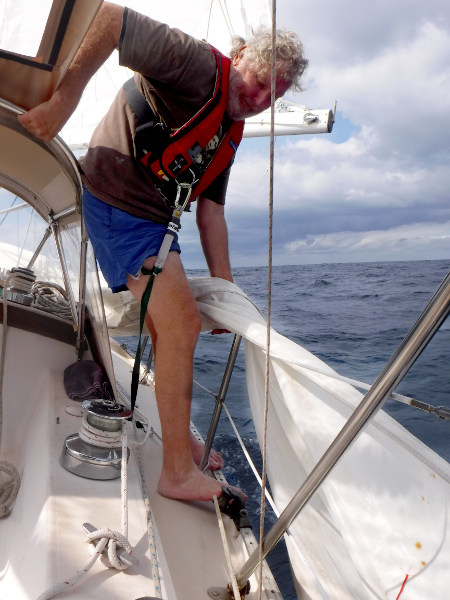 Greg hangs on as he inches past the dodger.

Next, I got the headsail and forestay out of the water. Working from bow to stern, I could pull up a small section at a time, and get it over our lifelines. When I got to the stern I temporarily tied it off. Now we could start the engine without worrying about the sail getting fouled in the prop.

Duwan started the engine and turned into the wind. I released the main halyard to drop the mainsail, and went forward again to flake it and tie it to the boom. Next, I went back along the headsail and tied it up every few feet to secure it better. Now we could safely motor.

But where to? Well, Cuba was the closest land, and an obvious choice. But it’s technically still illegal for US pleasure cruisers to go to and from there directly. Cubans don’t care. The US does. Before today I had been lobbying for a stop in Cuba anyway. Duwan thought it was a bad idea. Now, after our USCG visit, it was clear that if we went to Cuba, we would have “some splainin’ to do” when we got back.

Mexico was too far off now. The US Dry Tortugas and Marquesas were closer than Key West, but if we arrived at night we would be anchoring in a strange place. We decided to go back to Key West.

We motored northeast with 5-10 foot waves coming from the southeast 1-2 seconds apart. With the current, we were making six knots. It got very sloppy. Steering manually was strenuous. When we traded shifts it felt like we were prying cold dead hands off the wheel.

Then the engine started dying. First it was every half hour or so. But it happened more frequently as we progressed. When the engine stuttered, joggling the throttle might help. Usually, I had to pull the ladder and cover off and bleed the line though. I tried to do this quickly before it died altogether. If I was at the helm, and Duwan was trying to rest below, she would have to come take the wheel. If Duwan was at the helm, I would leave the ladder and cover off. If I had to go up to the cockpit, I could use the radiator cap as a step. 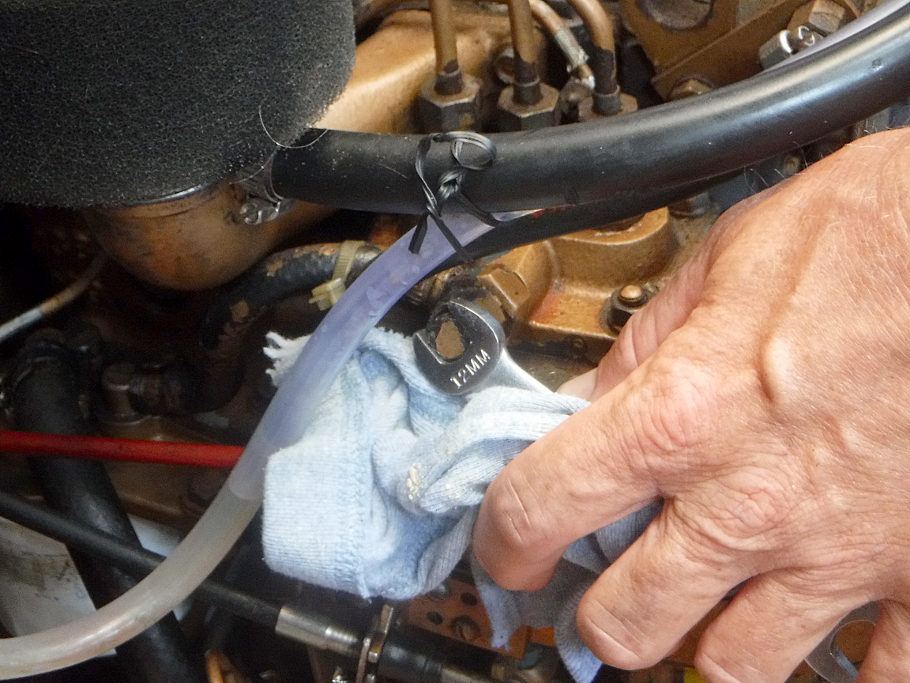 I considered trying to identify and fix the real problem. But the fuel lines are buried in hard-to-reach places under the galley and double bed in the salon. The double bed? It was the resting place for whoever was off shift. It was covered in bedclothes. It was also covered with two shelves of books which wouldn’t stay on the shelves in these conditions. The bed had been soaked by a particularly energetic wave that splashed through the companionway. And Bob? Poor Bob’s body and head were separated, bouncing around somewhere.

No, I didn’t want move all that stuff and dig in hidden compartments. I would just keep bleeding the lines as needed. At some point late in the afternoon. Duwan asked me to put her uneaten lunch back into the fridge.

At dusk we were 55 miles away from Key West. We turned on the running lights and chart plotter. We were still making 5-6 knots, but the engine was threatening to stop about every 15 minutes. The moon was a couple of days past full. I’m sure it was beautiful. But we couldn’t see it for the clouds. It was pitch black, so it was always surprising to get doused by a wave.

Neither one of us was able to get any sleep. It was just too rough. (I was ready to stay at the helm the entire way back, but Duwan insisted that I get some rest. “Are you sure you want to take the wheel?” I asked her. “No”, she replied, “I want to go below and cry and scream and hide and wait for this all to be over, but I can’t. You need to rest.”)

By five AM we were outside of the Key West channel, where we finally had enough break in the cloud cover to get some moonlight. Seas were about five feet, still a second or two apart.
As Duwan steered us toward the channel entrance, I alternated between crab pot patrol and engine bleeding. We really didn’t want to snag a crab pot now. Once inside the channel, I just sat over the engine, turning my wrench every few minutes.

With all the background lights from Key West, the channel lights were confusing. But Duwan also had our outbound track on the chart plotter to follow. The only traffic we encountered was a fishing boat, which cut right across Duwan’s path. 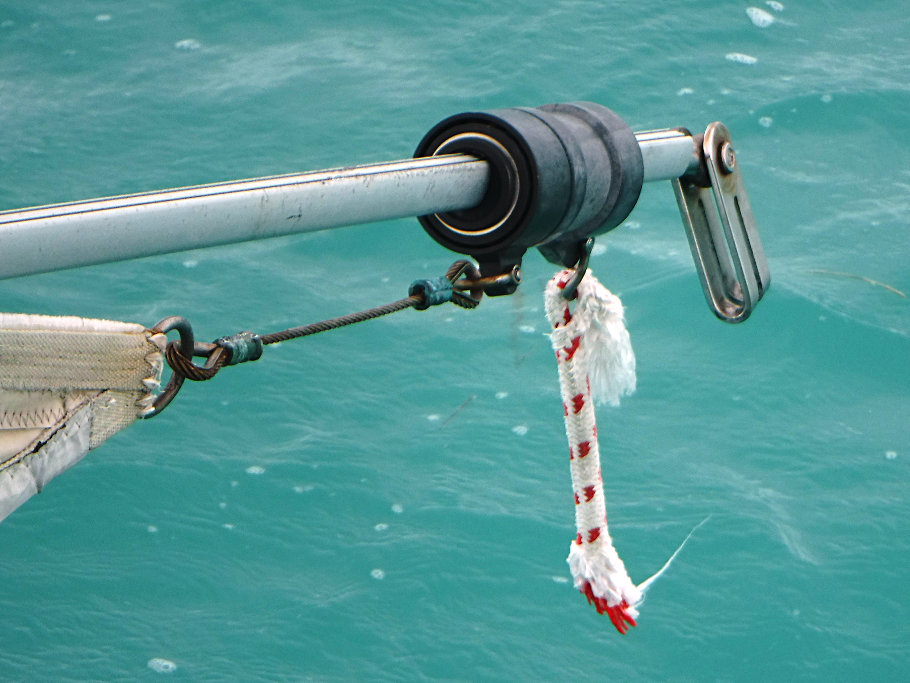 Since the forestay is longer than the boat, the end hung off the back, bouncing up and down, slapping in the water on our return to Key West. Here is the top of the forestay and the broken halyard hanging off the rear of the boat.

Duwan steered us back to our latest anchoring spot, where I dropped anchor. Now the engine wouldn’t run longer than 30 seconds. It died before all the anchor rode was out. We restarted it and gave it some reverse. The chart plotter said we were holding. The engine gave one last gasp, then expired. Time to get dry, find Bob’s head, and have a few breakfast beers. Sorry. No video recap of this trip. And Mexico will have to get by without us, for now.

* We’d love to report the actual wind speed, but our wind gauge quit working two years ago. It’s just not worth spending over $500 to replace it. Normally, my wind gauge is a hat. If my hat won’t stay on in the morning when I take off the sail cover, I tell Duwan it’s too windy to travel.

** If both of us had been in the cockpit, one of us could have just let out the sails. This would have reduced the heeling, and we could have stayed on the same course. In the future, if you, dear reader, happen to see a ghost reef, my recommendation is to ease out the sails before it arrives. 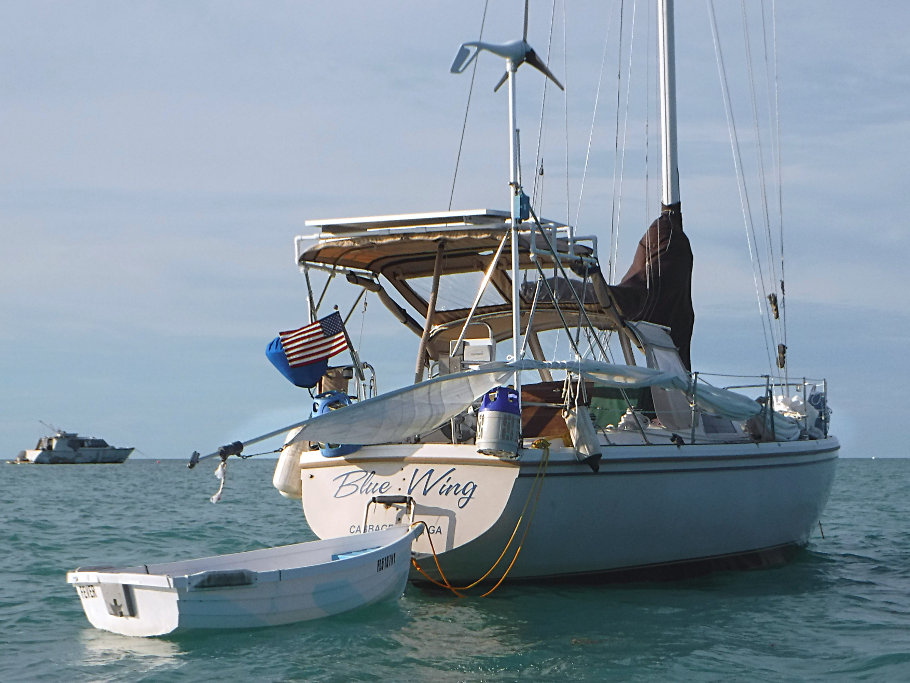 The sail and forestay lashed to Blue Wing’s lifelines.

3 thoughts on “Passage to Mexico, Part 2”