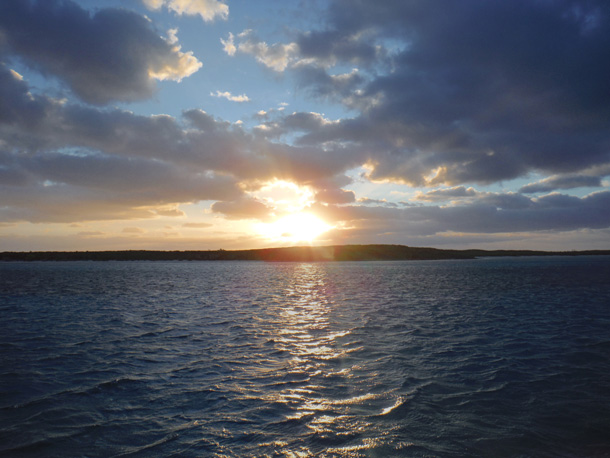 We woke up fairly early and had breakfast before heading out onto the bank as we headed up to Hawksbill Cay. The wind was blowing out of the Northeast at 20 knots, and we made 7+ knots the entire sail. I sailed the whole way in 4 foot seas, loving every minute of it. Greg and Duwan commented on how this was not one of their typical sailing days. Nonetheless, we had a great time underway and arrived at Hawksbill right at low tide. We anchored, had lunch, and then dinked over to the north end of the island.

The wind was blowing out of the northeast at 20+ knots, so we hugged the shoreline on the way around to the north peak. I took pictures on the ride over, and Duwan kept hinting at the view around the next point. We finally made the turn around the northernmost point of the island and I almost lost my mind. It was the most beautiful thing I have ever seen in my life. The low tide had exposed this vast area of pure white sand with a ribbon of teal blue running in the middle of it. We brought Jethrine onto the shore and buried the anchor in the sand while we took off exploring. I got several panorama shots from various points along the way and eventually made it out to the other side of the island where the Exuma Sound was pushing its way back into the bank.

Greg decided to swim across through the current to a small island stranded in the midst of this indescribable beauty. I was not feeling quite as adventurous, so I walked out to the sandbar submerged about 2 feet and walked across instead. I took a few more photos before we walked back across to the sandy expanse. Greg ran to check on Jethrine, while I waited for Duwan to emerge from the trail she had set off to explore. The three of us walked back together and bumped into a couple with their young daughter and Jack Russel that were headed in. Side note: if this toddler is seeing things like this at her age, I can only imagine the life of travel and adventure that awaits her!

The dink ride back to Blue Wing was uneventful, but we got a chance to have a more leisurely ride with the tide at our backs. We moved the boat closer to shore to get a better spot to anchor. Little did we know we were pulling alongside a party boat with a handful of dudes with one or 2 girls tops. They had no problem peeing off the back of the boat facing right toward us in broad daylight. I joked that they would probably be up all night partying, but it did not turn out that bad.

Aboard Blue Wing, we had dinner and cocktails before sharing photos from the day and watching an episode of Horatio Hornblower on Duwan’s laptop. Greg played some songs on the guitar on deck under a full moon. I stayed awake as long as I could, but eventually went below decks to fall asleep. Halfway through the night, Greg got up to close the hatches, as it had started to rain. I jokingly said that Blue Wing was getting a free boat wash, as salt water had poured up over the deck on our sail up to Hawksbill.

The next morning, we had breakfast and got ready to get underway for the sail back to Bell Island. We were headed to the Sea Aquarium at low tide, so we had to get our shit together and get out of the anchorage quickly. Most of the other boats had already left by the time we got underway. Winds were out of the East and we were headed south. We motored out a short distance, raised the main sail and I got us going on a close reach for the sail down to Bell Island.

Soon after our departure, another sloop emerged alongside, raised her sails, and thus began the race. Blue Wing bucked 4 -5 foot seas, but we maintained 6.5 knots most of the way. A couple of times the waves were particularly brutal and had Greg down below checking to make sure things were not flying everywhere. A couple of hours in, the challenger was barely in sight – we had clearly won this race. There were countless boats headed north and they all passed off to our port side as we cut briskly through the waves. It was a much more strenuous sail than the sail up the Exuma Sound on day 1 and my feet were sore from the punishing stance, Blue Wing heeled over for hours on end.

We finally arrived alongside Bell Island and we proceeded to tack a couple of times on our way in. The water was so incredibly beautiful that I found myself awestruck at the magnificent scene on display in all directions. Surprisingly, Duwan let me take the boat all the way into our final anchor spot, through some very narrow passages with rocky shoreline on one side and sand bar on the other. To say it was like threading the needle is an understatement – it was a very tight squeeze!

We anchored just south of the Sea Aquarium, a hundred yards or so from a buoy marking the location of a downed plane on the sea floor. We got our things together quickly, skipped lunch and immediately headed off for the sea aquarium to catch it at low tide. I dove in first and quickly realized why this was such a sight to see – fish were everywhere and it was a lot to take in. Another boat of divers pulled up right after we moored, which gave us some unexpected company. Greg and I dove while Duwan waited aboard the dink.

I saw a ray nestled along the bottom, well disguised in the sand. I swam around for a bit, seeing more types of fish than I could count, but kept coming back to the porcupine fish that was about 15 feet down on the bottom next to a bright green patch of sea grass. He was the most unique of all the fish I saw, so I dove down a few times to try to get a good photo. I went off exploring along the edge of where the other divers were when I saw the sight I was hoping for the whole time – a nurse shark had entered the picture! I cleared my mask, took in some air and dove down to catch a few shots of him in retreat. He swam off, but not before I got several good photos of him.

I came back to Jethrine elated at my shark encounter. We decided the sea aquarium had given all it had to give, so we dinked back to the downed plane where we went through an elaborate dance of getting me down to the submerged plane in the strong current that was much more than I was prepared for. Just hanging onto the slippery line that held the buoy marking the location was a challenge. I dove it a few times before Greg jumped in to get some photos of me on the way to the imperiled plane. The current was getting the best of us, so we headed back to Blue Wing for showers and dinner. And beer. And whiskey.

The next day, we got up early in an attempt to make it back to Thunderball Grotto to dive in the cave at low tide. Wind was out of the East at 20+ knots for our sail down to Staniel. We tacked a couple of times on our approach, but we didn’t get close enough on our second approach in order to make low tide, so we motored the rest of the way in. We anchored, skipped lunch, and Greg and I headed over to the Grotto in Jethrine.

The cave was truly amazing and we saw tons of fish on our dive. Of course, we were not the only ones that had the idea of diving at low tide. There were 10-15 people in the cave most of the time we were there. Greg and I headed out of the East entrance to the cave where there were a few fish, but even fewer people. I took a ton of pictures on this dive, and could not get enough of the beauty inside the cave.

The crowd of divers started to thin out after 30 minutes or so, but I wanted to stay, and stay I did. I was rewarded for my patience by an awesome encounter with a Great Barracuda! I swam with him for about 15 minutes, capturing tons of photos and a little bit of video. Greg had been so patient with me, I decided it was time to head back to Blue Wing, so I exited the cave with a big smile and a great story of my Barracuda encounter. 🙂

Back aboard Blue Wing, we motored a short distance to get a good anchor spot between the Majors to protect us from the South and Southwest winds that were forecast for that night. After we found a perfect spot, Greg made dough for the much-anticipated pizza night. I had read about pizza night on the blog a couple of years ago and was eager to experience it firsthand. It was a delightful experience seeing the pizzas come together, and the irresistible photo opp of pizza cooking on the grill with stunning turquoise waters behind it had me taking quite a few photos. The pizza tasted even better than it looked, with a delicious combination of artichoke hearts, sundried tomatoes, olives and pepperoncini peppers. Now that I have experienced it for myself, I can honestly say it is about the best ‘boat food’ I have ever had.

Pizza and beer for all – that was the theme for the night’s dinner. Greg was generous with his rapidly dwindling supply of beer that had been squirreled away since leaving Florida in the Fall. After all, you don’t just run down to the store and pick up a 12-pack when you’re sailing. I learned that even on inhabited islands in the area, beer is not readily available, and when it is, it’s very expensive. Thanks, Greg, for sharing such an awesome experience! 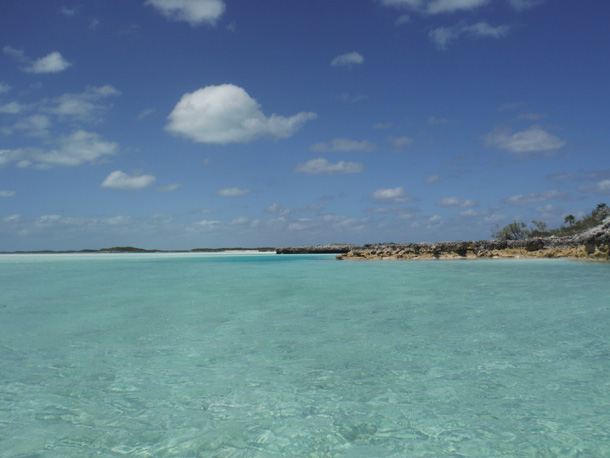 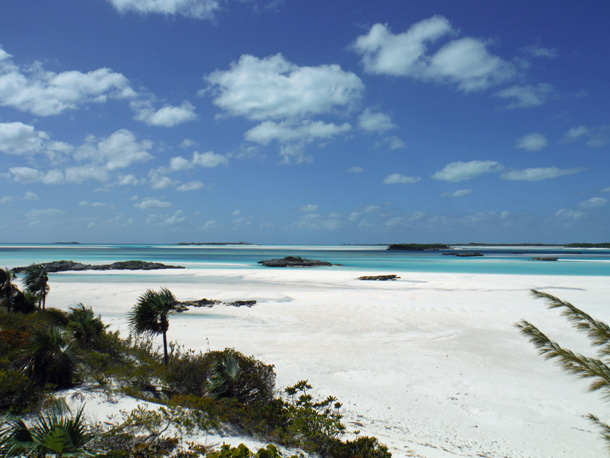 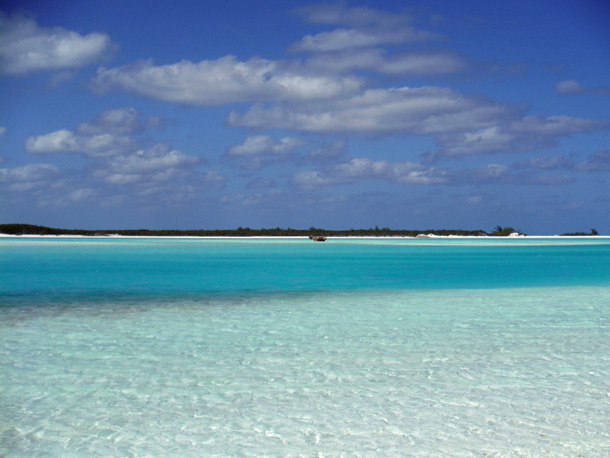 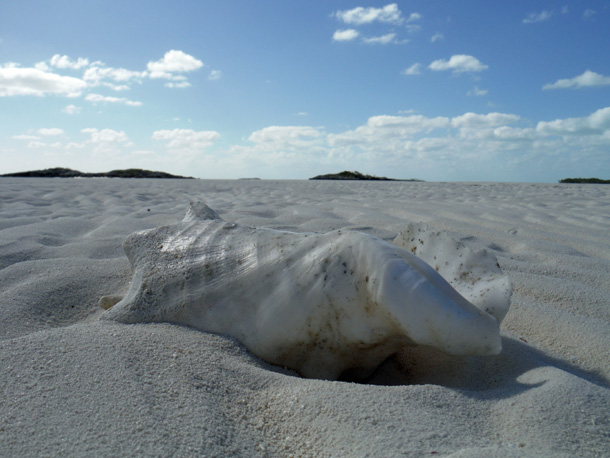 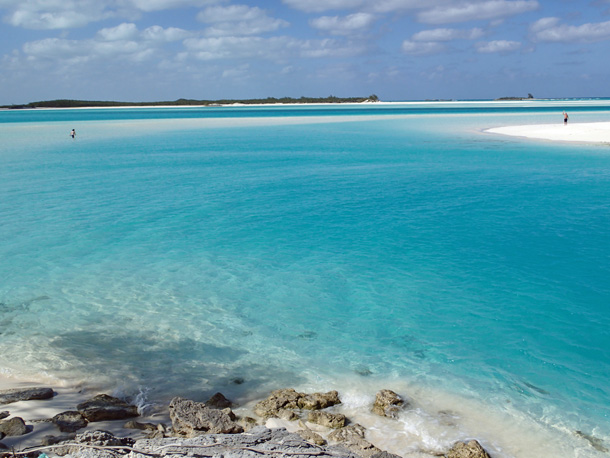 Brandon walking out to meet Greg 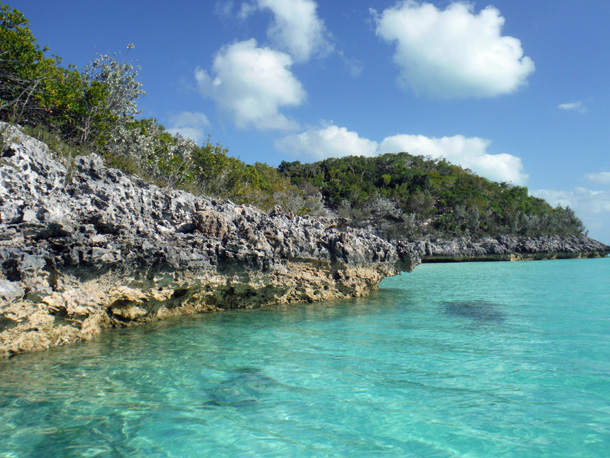 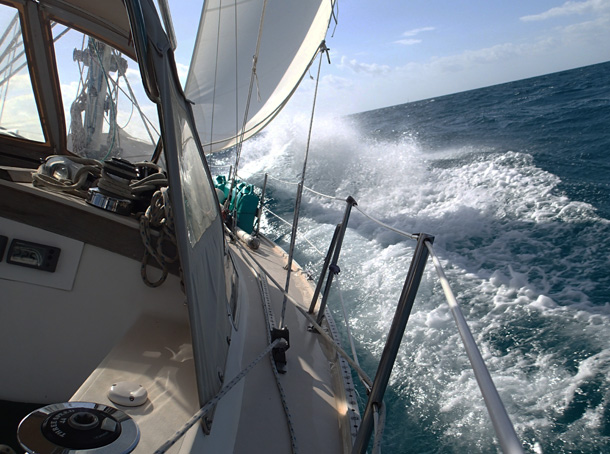 Blue Wing crashing through the waves 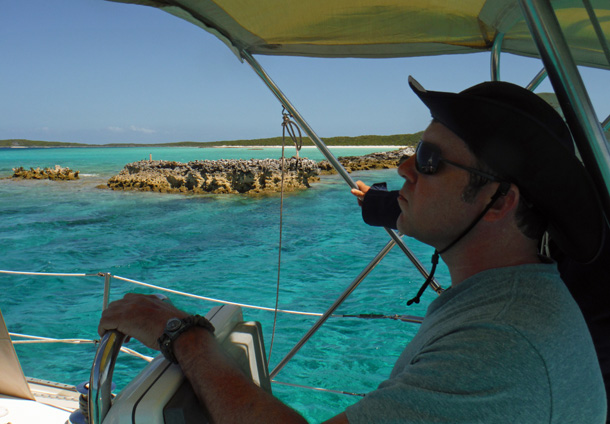 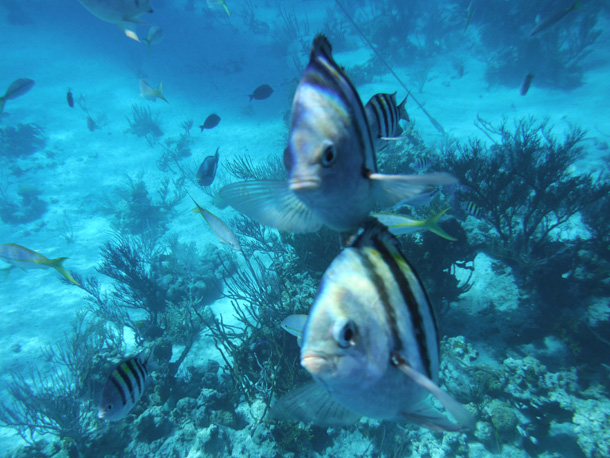 I wonder if he was angry or if his face is just stuck in that position? 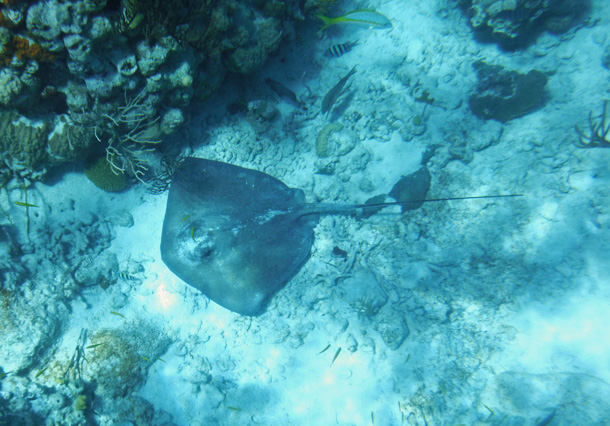 Ray on the bottom at the Sea Aquarium 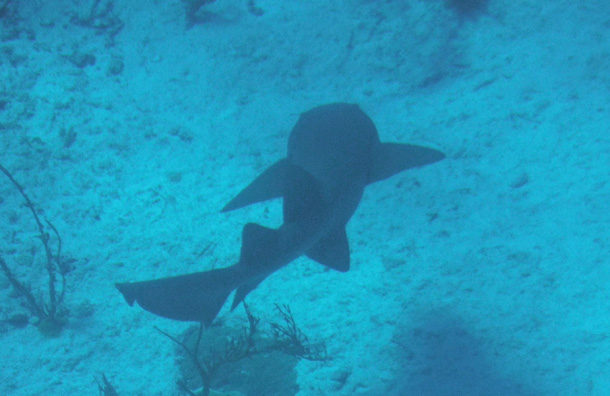 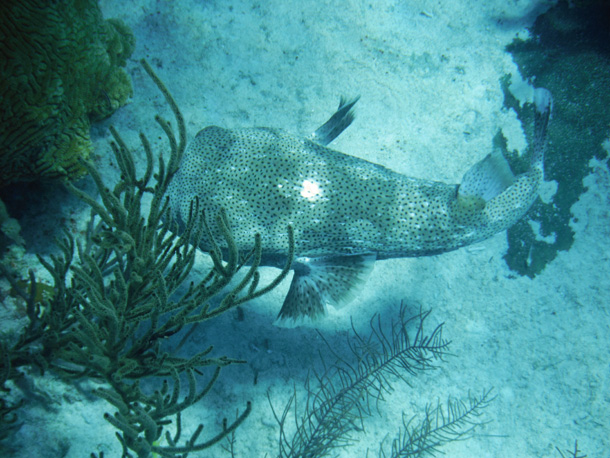 Porcupine fish at the Sea Aquarium 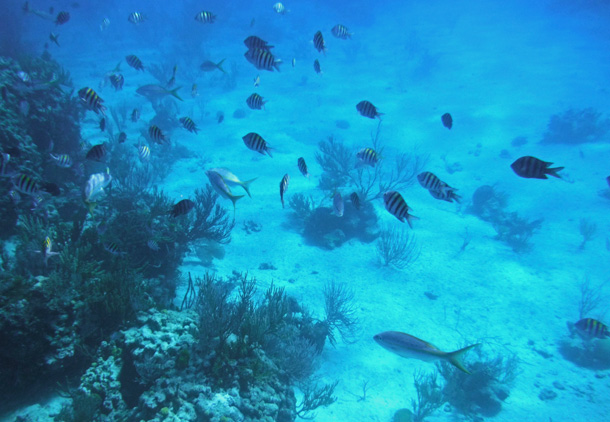 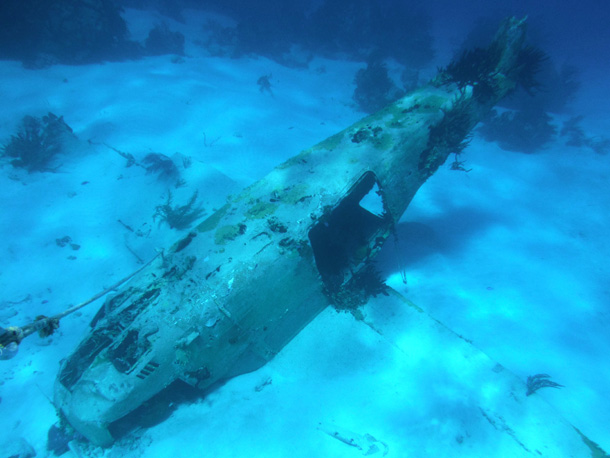 Plane wreck near the Sea Aquarium. The current is so strong here that you have to hold onto the buoy line or you’ll get swept away. 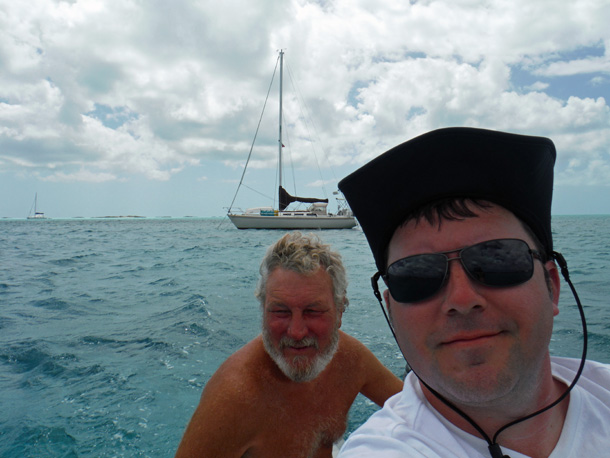 Greg and Brandon dink over to dive in the cave. Blue Wing is in the background 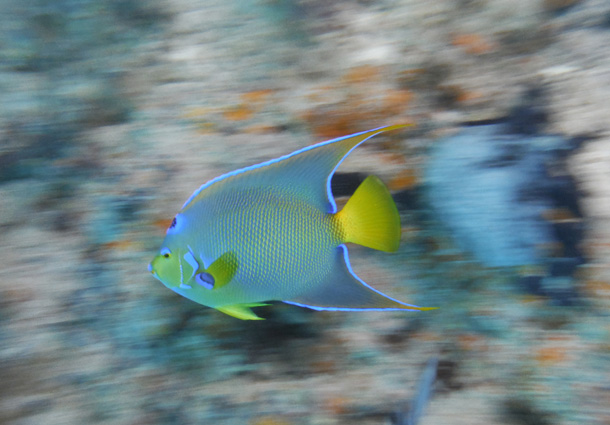 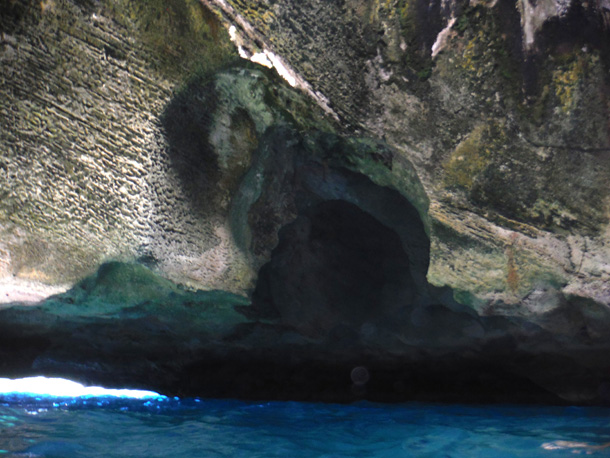 The inside of the cave 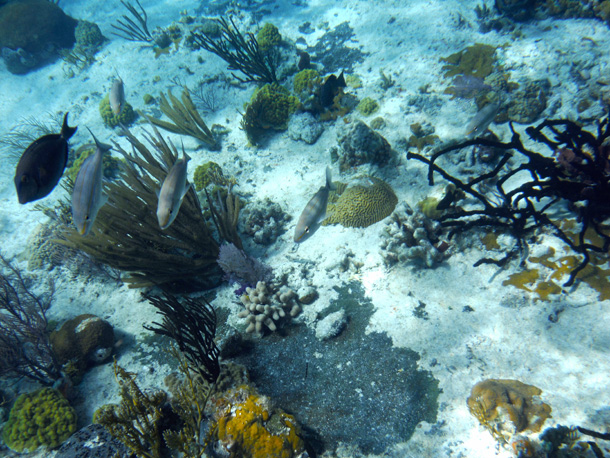 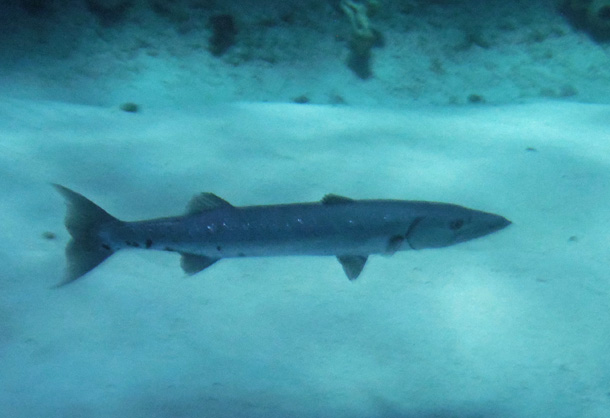 Great Barracuda in the cave at Thunderball 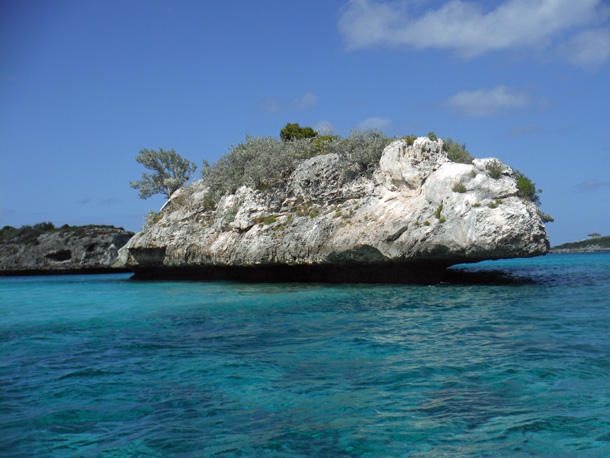 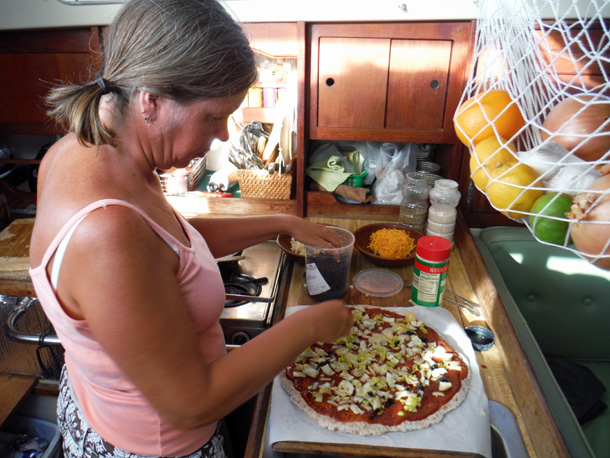 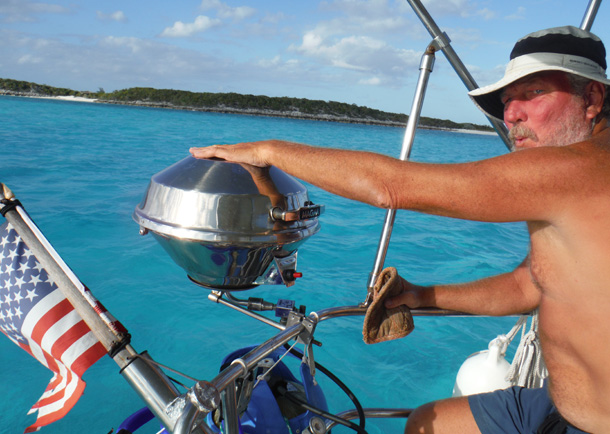 Greg is pleased with the heat building up on the grill 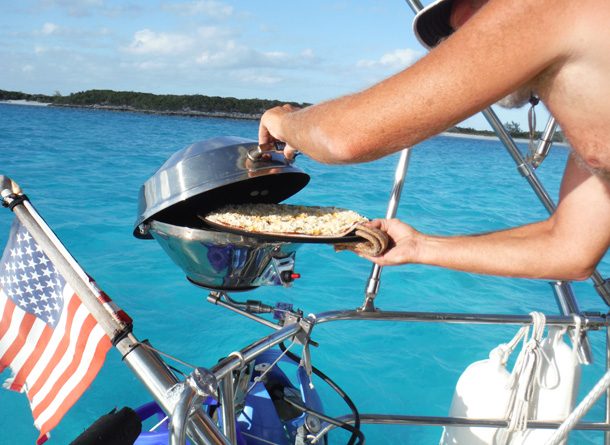 Pizza goes on the grill 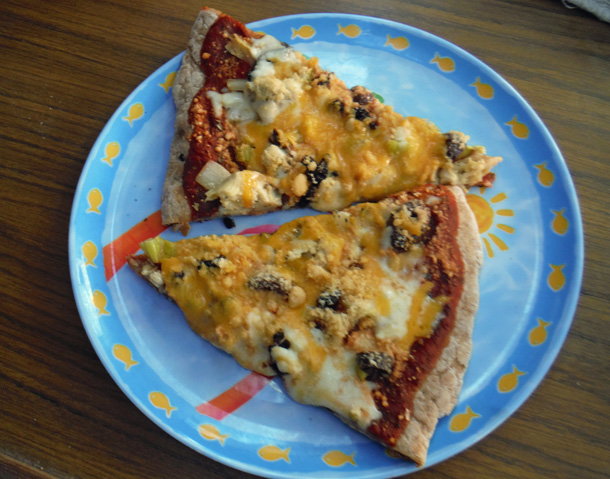