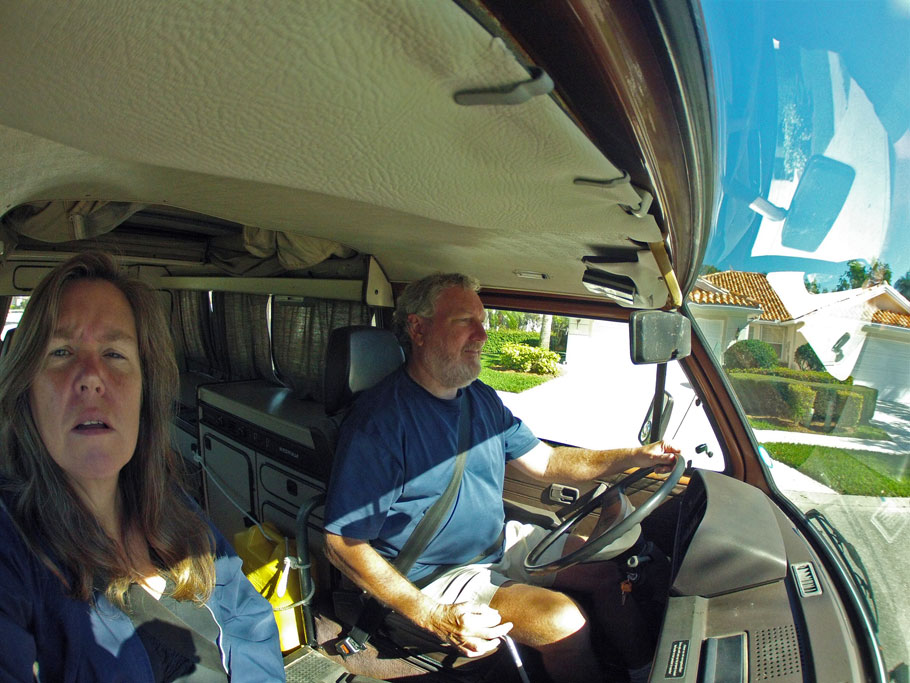 Tooling around in Great A’Tuin.

In my earlier post I said that about half the cost of WVO conversion kit (from a company like Frybrid or GreaseCar) is for delivering heated fuel to the engine compartment. I’ve come up with an approach that’s much cheaper. I can’t really test it, though, until I complete the whole conversion process. I need to paint another house before I can spend that kind of money.

My approach differs from the “kit” system in several ways. Way one: instead of having a large 10-15 gallon tank, mine is 5 gallons. Way two: since my tank is near the engine I won’t be using a kit’s special heated fuel lines. Way three: since my fuel source is above the engine I will try using gravity instead of a fuel pump (I can always add a pump later if this doesn’t work).

Way four. Did you know that most diesel is not burned on the first pass? I didn’t. I’ve learned that most fuel is returned to the tank and cycled through again. So a “kit” system mimics this process for the oil, and uses a specially heated return line to the tank. I plan to bypass this this step and divert the unburned WVO right back into the system.

Check out the pics. And be sure to let me know if there’s something I’m missing. Oh, I’m working on a diagram that will help explain all this better. Will post when it’s ready. 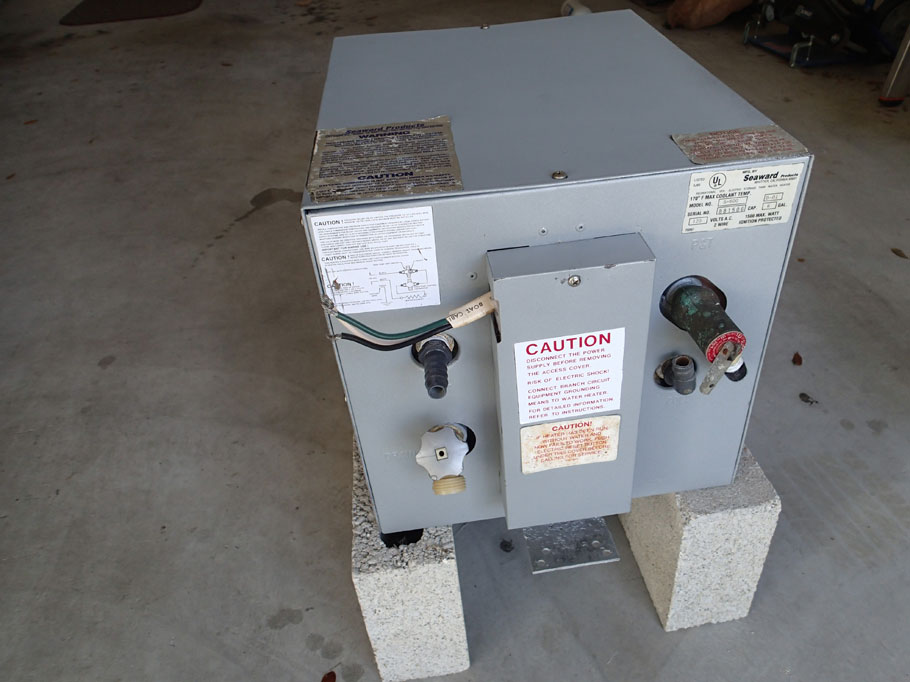 Here’s the tank I will use to heat the WVO. It’s a standard boat/RV water heater pirated from “Blue Wing”. (New they cost around $300). This pic is of the front. Top left is where the heated fluid comes out. Bottom left is a drain spigot. Bottom right is cold fluid in. And top right is the same pressure release valve you can see on your house’s water heater. 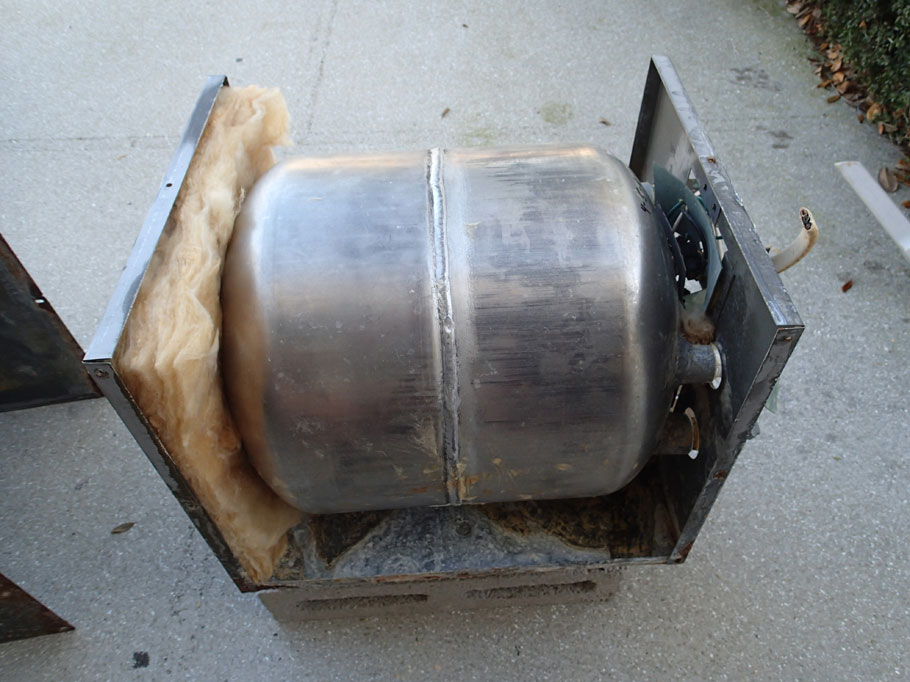 Here’s a side view of the tank with the cover removed. It was pretty grody, but cleaned up nice. 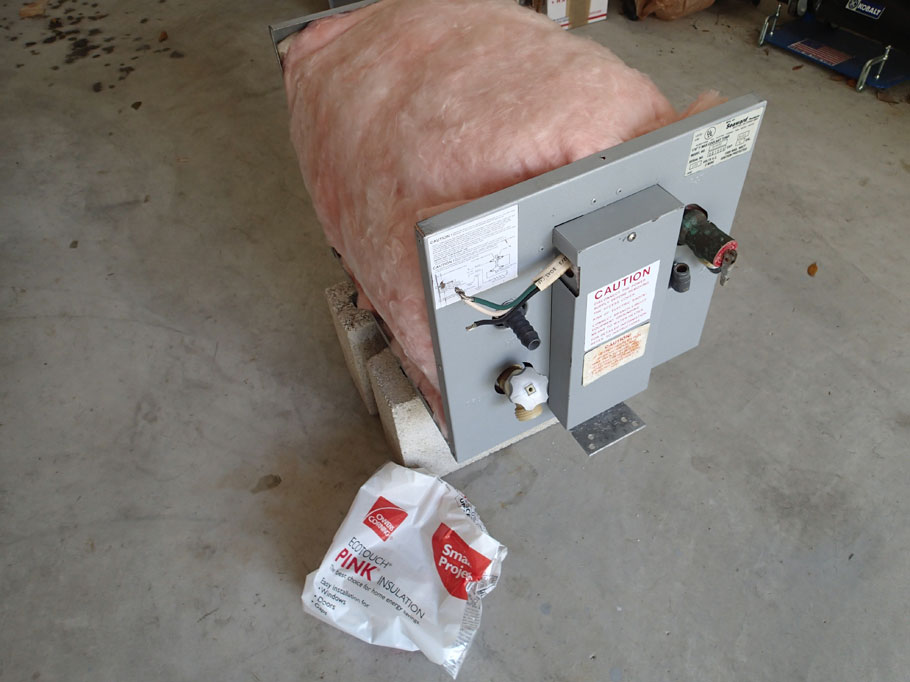 I got the rust off, painted the tank and put in new insulation. 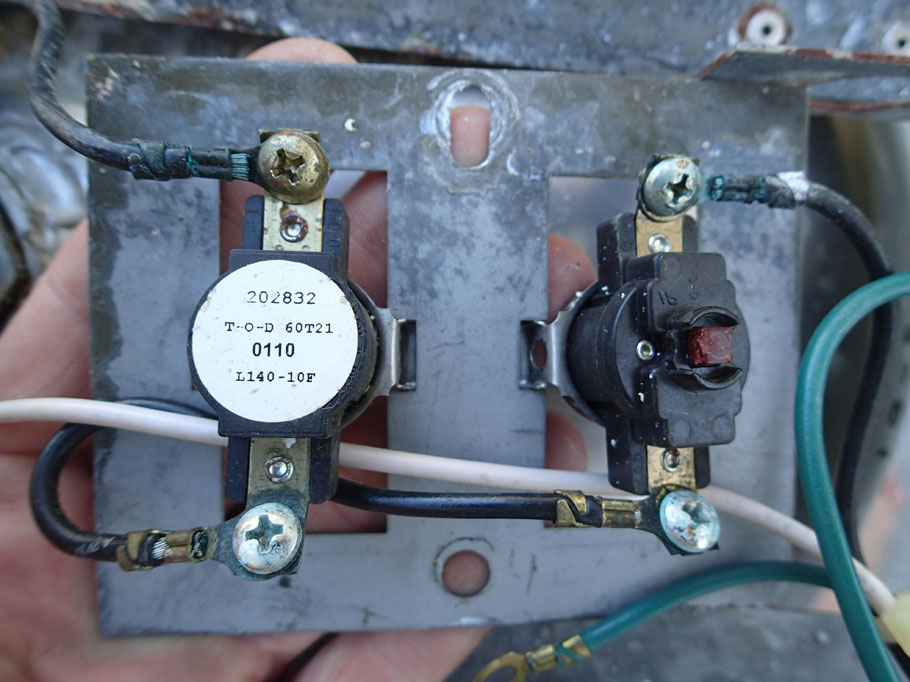 BONUS! The tank can also heats up inner fluids using electric AC shore power. On the right is a reset switch. On the left is a 140 degree thermostat. (I replaced it with a 180 degree stat I found online, sold and shipped for $5.) So, if we stay at your house, and you are kind enough to let us run an extension cord, we can be off and running on WVO without waiting for the engine to warm up. 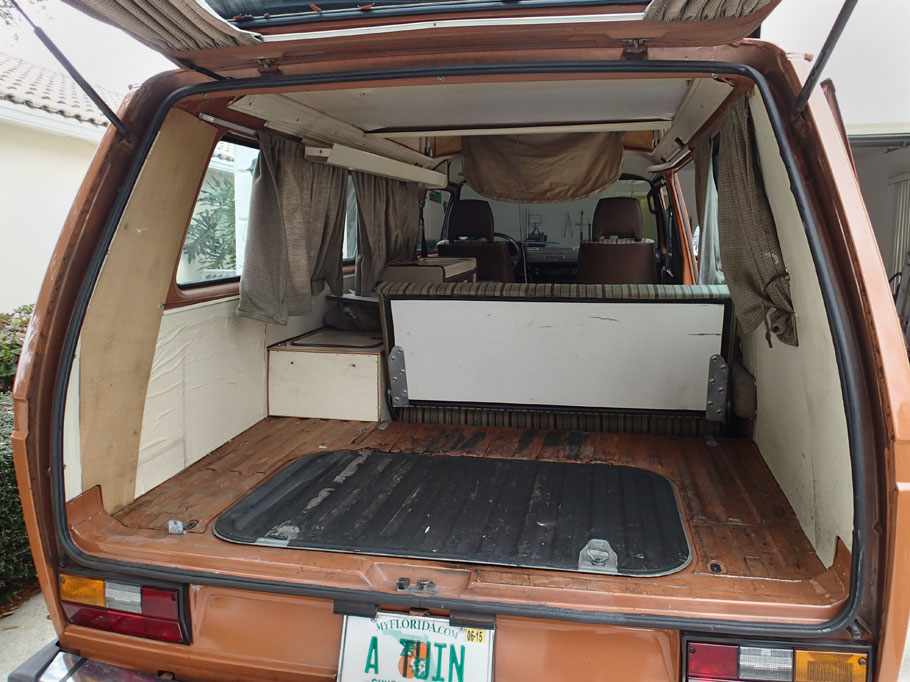 Here’s the van with the rear side and upper cabinet removed. Duwan suggested tinting the windows. So I put tinted film on the left rear while the cabinet was out. I also replaced the left rear contact paper. 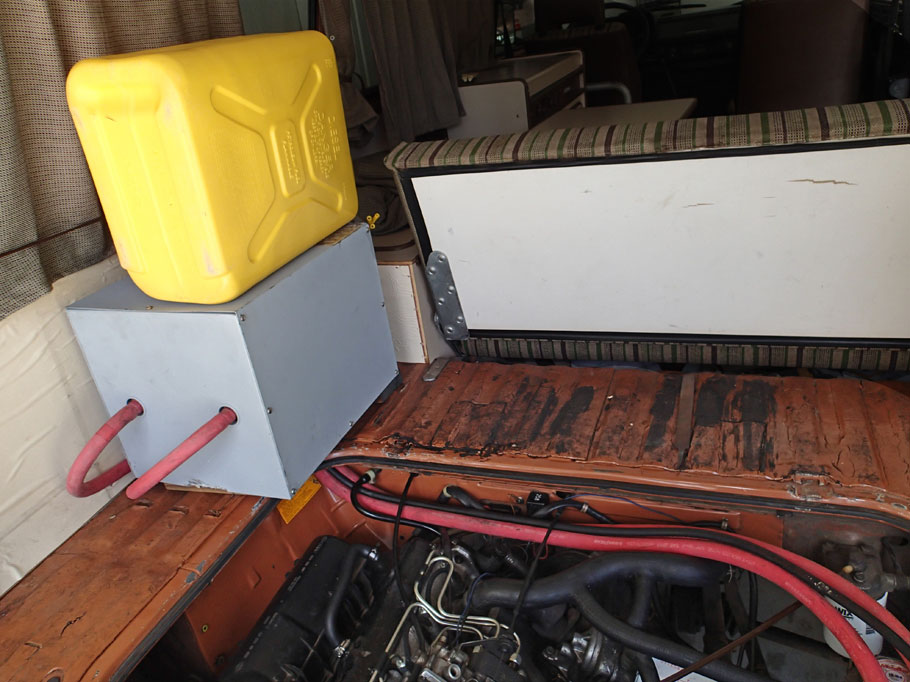 Here is the position of the tank relative to the engine. The tank will sit inside a cabinet. The red hoses are for the water/antifreeze mix that will circulate through the tank to heat the WVO. On top of the tank is a gerry can, sitting on its side. I don’t want to pour WVO inside the van. I plan to have several gerry cans with filtered WVO in them. Every 150 miles or so I will swap an empty can for a full one using a quick connect. 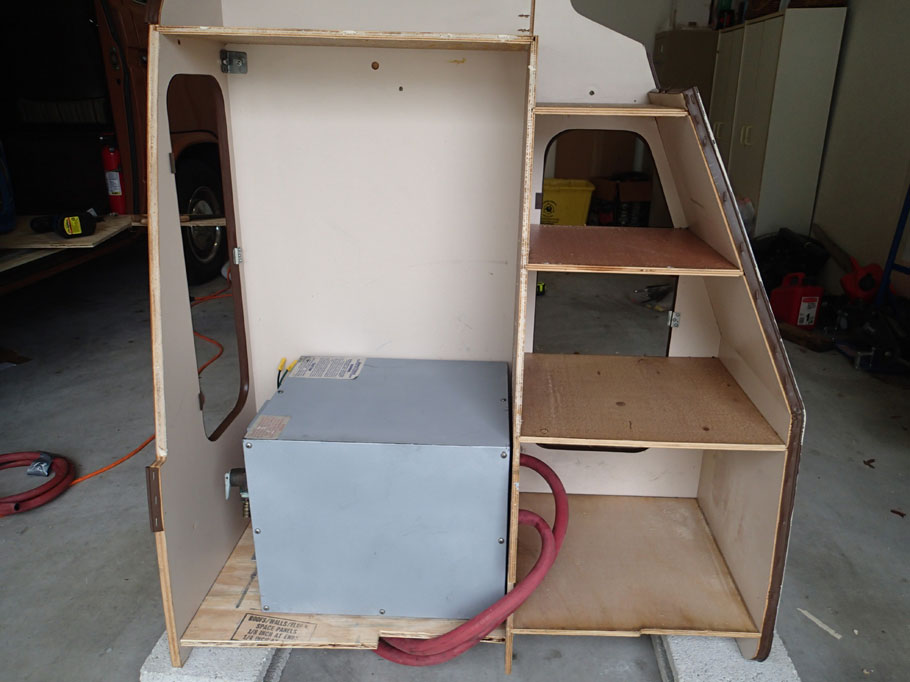 Here’s a view of the heater tank positioned inside the cabinet on top of its new shelf. You are “looking through” the rear wall of the driver’s side (portside). 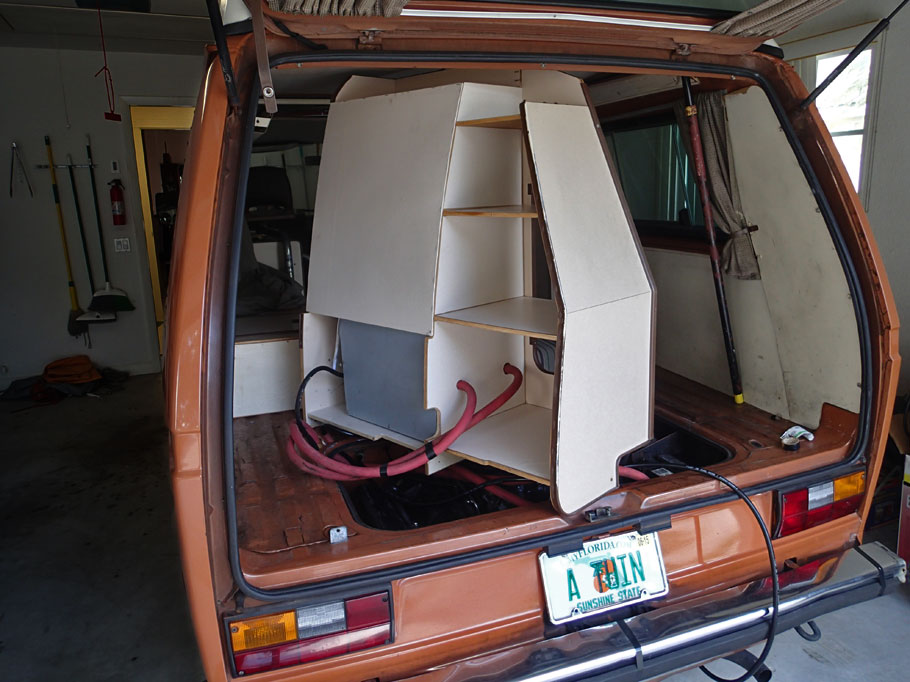 And here’s the cabinet, with all new contact paper, and heater tank and hoses in place. Ready to slide it to the left and tighten down some bolts. 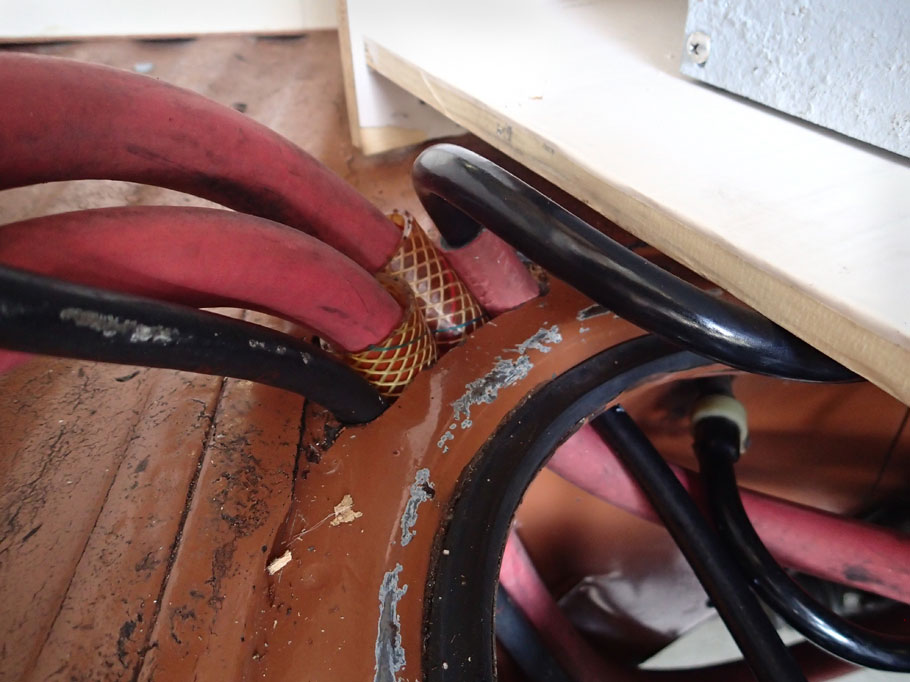 I cut this hole into the engine compartment. The black hose one the right will carry heated WVO. The red hoses in the center tap into the engine’s cooling system to run 180 degree fluid through the heating tank. The black hose on the left is connected to the drain valve. Some day I will want to drain everything out of the tank. Note how the hoses are wrapped to protect them from friction. 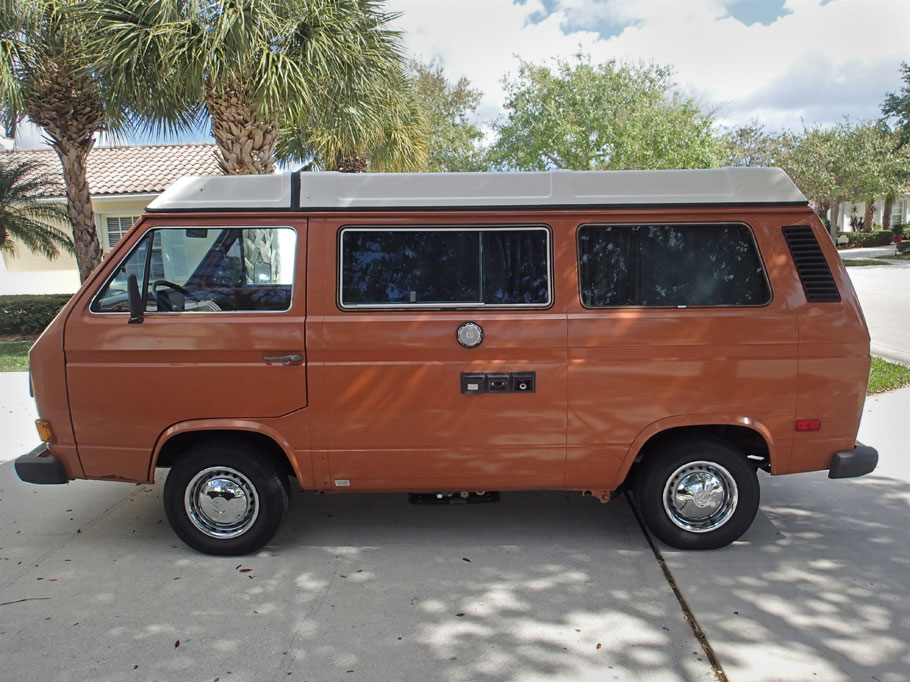 So, for all the WVO effort, here is the only visible difference: AT is now sporting tinted windows.

5 thoughts on “WVO Phase I”

Leave a Reply to Runs with Anchor Cancel reply