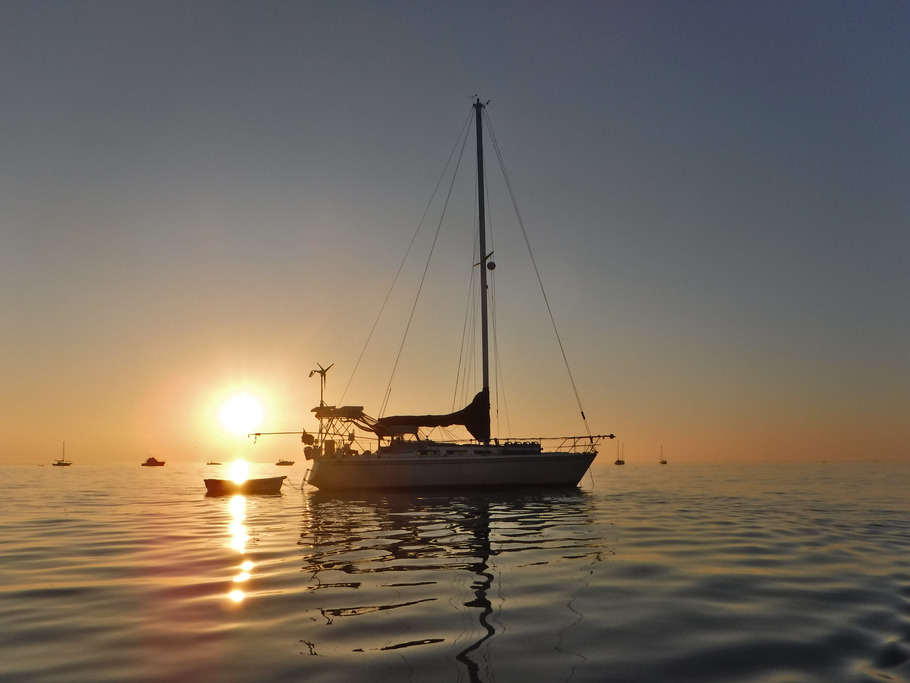 Blue Wing at anchor in Key West as the sun sets.

We are back on the dirt. Actually we have been back for more than a couple of months now. Life moves so much faster here on the hard stuff and we have been so crazy busy, that I have neglected the blog. I am starting to fear the rest of our tale of this past winterâ€™s sailing season will slip away to the to the dank, dark, cobweb filled basement of my mind if I donâ€™t turn it into words soon. Luckily for you, though, most of those insignificant details that I find so interesting and fascinating have already made their descent and only the highlights of our journey remain clinging on to the roof of my brain.

Despite having many exciting things to tell about our land life as of late, Iâ€™d like to keep this blog basically linear, so I am going to turn the clock back to February and pick up where we left off in Key West with me pissing and moaning about the weather.

No, I am not going to complain about the weather more or even lament that we never made it to Mexico, Belize, and Honduras – which I thought about almost every day during March, April, and May whenever I was doing an ever so tedious task, and realized, oh we should be in Belize or Mexico right now! This post is about the reason we travel, even when it is hard or scary or mundane or doesnâ€™t go the way we planned. It is about the stories – our stories and other peopleâ€™s stories. 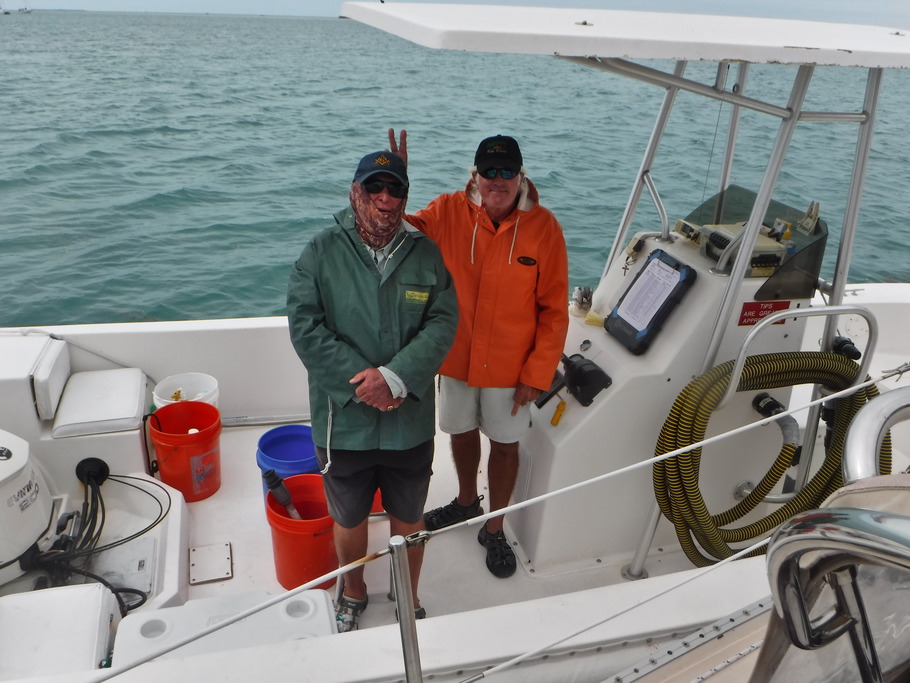 The Pumpout Boys, Doc and Dave

Pumpouts are free in Key West. You go online and sign up for the service and then once a week a pumpout boat will come around, tie up to your boat, hook up a hose to your holding tank, and make more room for another weekâ€™s worth of deposits. Doc and Dave are the pumpout guys, a couple of weathered tars, they have been here and back in the boating world of Florida and elsewhere. Each week they circle the anchorages, visiting all the boats and live-aboard characters in Key West. They are a congenial pair, always in good spirits, and always have a good story or two, like the one about the guy who ran out of fresh water and was surviving on salt water coffee or the guy who was growing tomatoes on board fertilized with his own self produced compost. They told us about ghost ships and gave us sage advice about going to Mexico – It is a good idea to check in (go through customs) before you hit the bars, lest the Mexican authorities usher you back to your boat and send you out of the country Ahora! 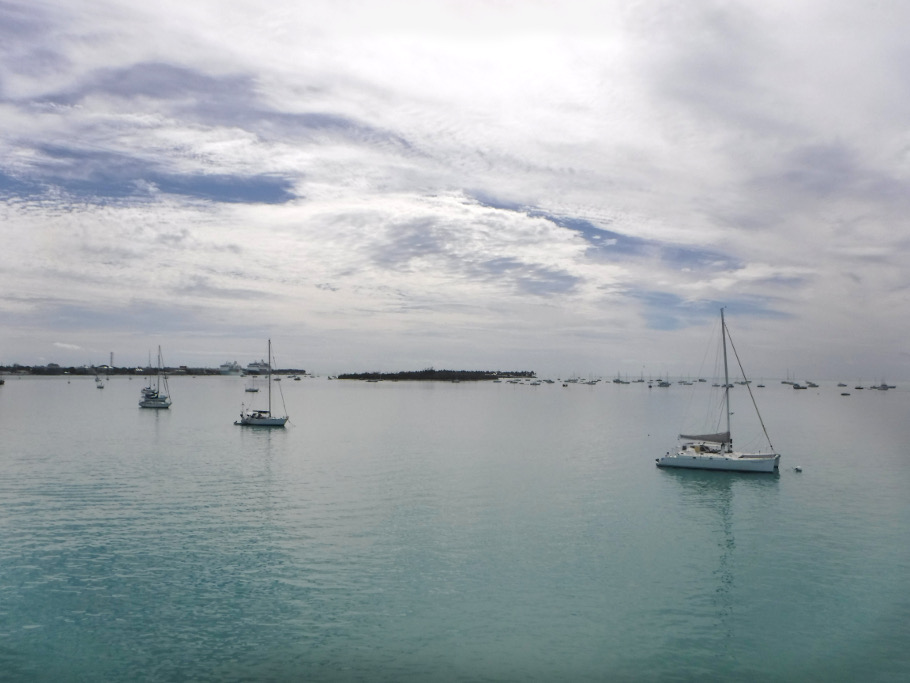 View of the anchorage and Doc and Dave’s territory. 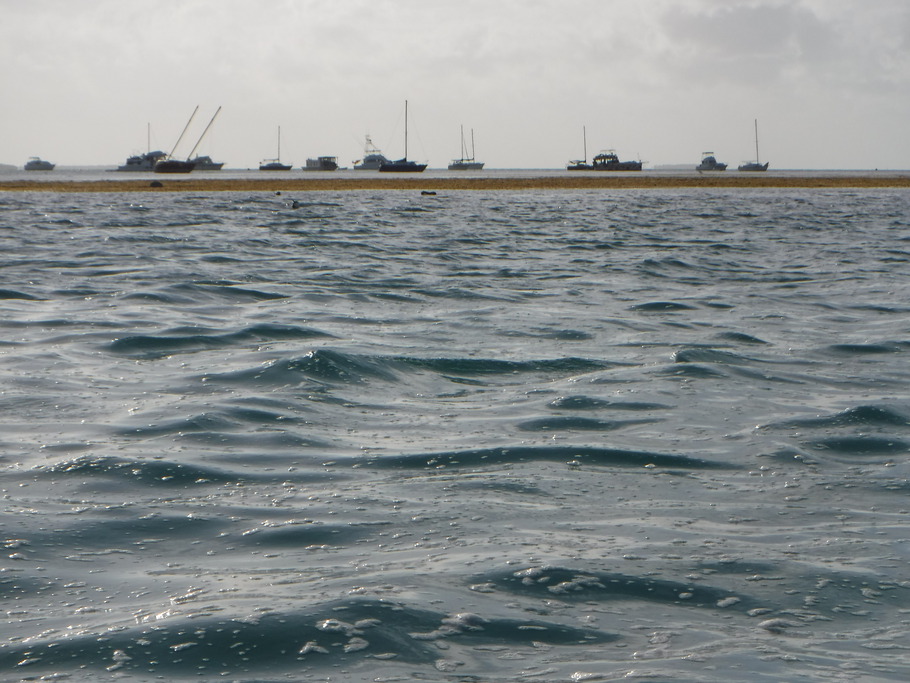 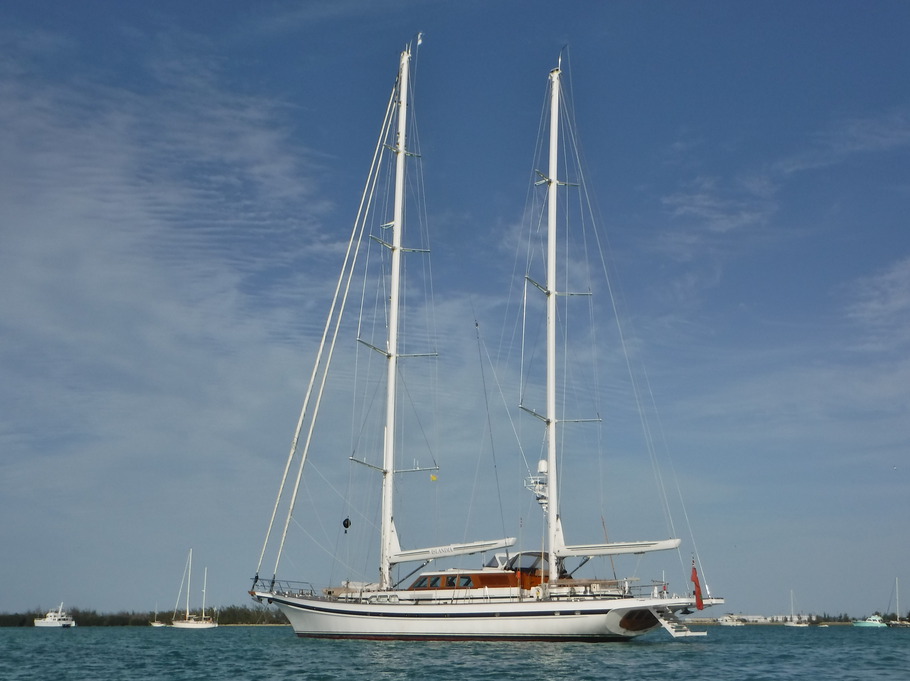 This boat was absolutely massive. It looks like it is dwarfing the other boats because it is. 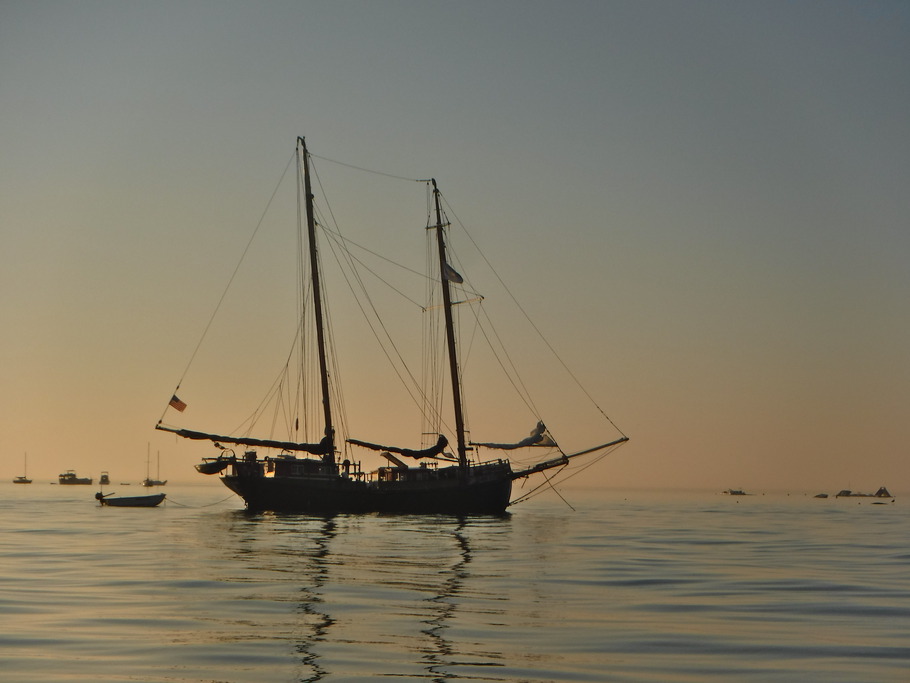 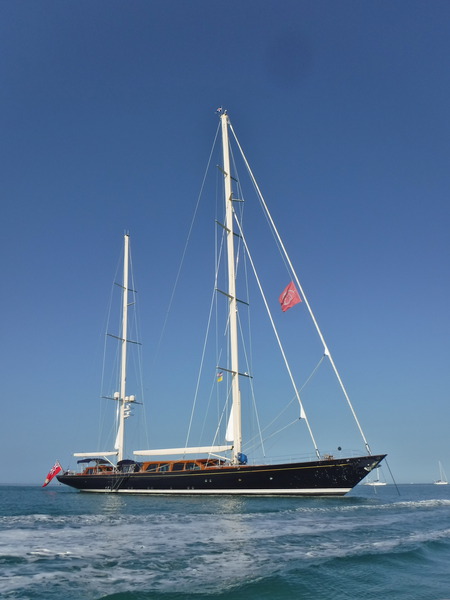 Another gigantic boat at anchor. I wonder if these guys call up Doc and Dave for a pumpout. 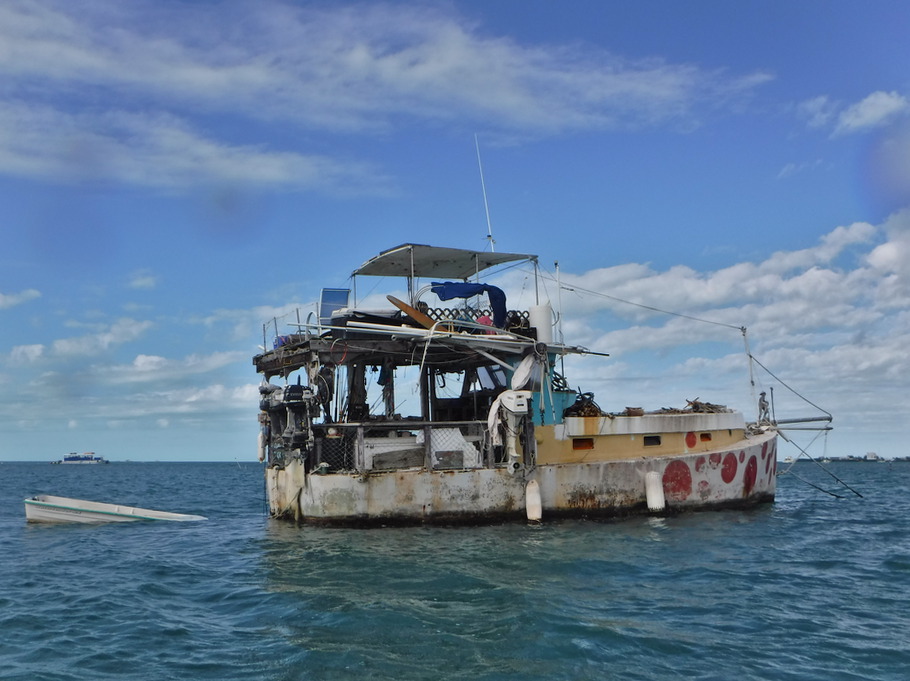 One of the more interesting live-aboard boats in the anchorage. 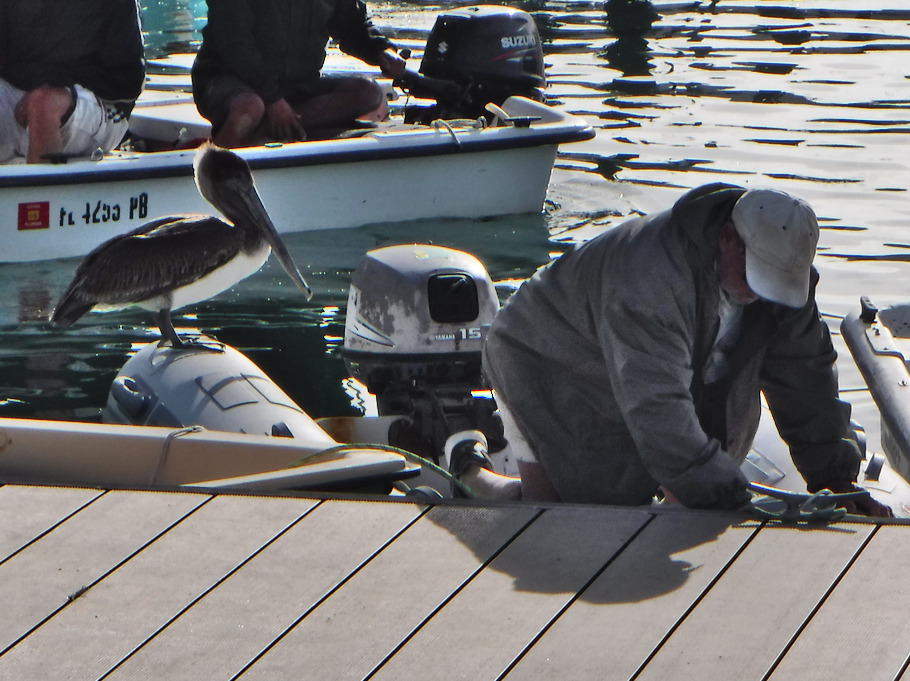 I didn’t get a good pic of Terry the Terrible, but did snap this one of him getting into his dink. The pelican didn’t fly off until he was underway.

Terry was sailing south to the Rio Dulce in Guatemala April of last year, when about 10:00 at night off the coast of Belize near Ambergris Caye the wind picked up and started to push him west, closer and closer to a reef. He decided to drop his sails, crank the engine, and motor to get back on course, but it was just a little too late. The wind was in charge now and pushed him onto the reef, wrecking the boat and puncturing its hull. Taking on water fast, Terry attempted to launch his dingy and outboard from his dingy davits, but the crash had damaged the davits and he couldnâ€™t release them. He needed to abandon ship br))ASAP, so grabbed his backpack, stuffed all of his important papers into it, jumped into the dark waters, and started to swim towards shore. After a 2 1/2 mile swim and 4 hours later, Terry arrived within 100 feet of shore with an out going tide, yelling and screaming he struggled through that last bit of water, slogged through the muddy shallows, and collapsed on dry land. Did I mention Terry was 74 years old?

Although Terry had made it, his papers did not. In his haste to leave the boat he failed to sufficiently zip up his backpack and had lost his passport and other documentation to the Caribbean Sea. A local took Terry in while he waited for replacement papers to arrive. Facing a $25,000 fine for hitting the reef, Terry quietly snuck over the border into Mexico and made his way back to Key West once he had his new passport in hand.

We rode with Terry on the bus back to the wharf and left him at the dinghy dock where he climbed into his new dinghy and motored up into the anchorage to his new boat which he was in the process of getting ready to point south and make another attempt at the Rio Dulce. 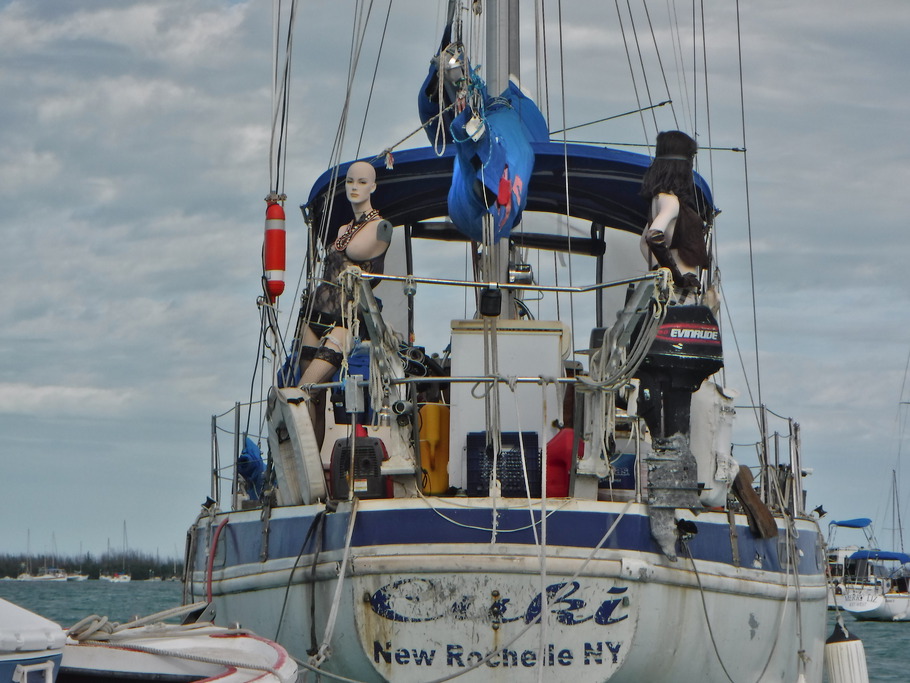 One of the more interesting boats anchored off Key West, Cuki, Jeff and Cinnamon’s boat.

As we motored through the anchorage looking for a good spot to drop the hook on our initial arrival in Key West I was wide eyed taking it all in. The boats, derelicts, colors, salty relics, and odd adornments we saw as we circled around, gave me a sense that we were dropping the hook in a special place, rich with history of adventurers, vagabonds, eccentrics, and misfits. But a visit to the main drag, Duval Street, told a different story.

Giant cruise ships packed with tourists pull into port every day and set their passengers loose on a different kind of Key West. Jeff, a 30 year resident, who we met in a dockside bar with his dog Cinnamon, called it Disneyland. Jeff lived on a sailboat out in the anchorage. He had hitched hiked to this far corner of the country at age 15 and had lived there long enough to call himself a â€œConchâ€ without being rebuked by born in Key West locals. He told us that Key West was sadly changing and that the powers-that-be were chasing all of the characters off of Duval street and out of Mallory Square.

Jeff also related stories to us about Jimmy Buffet opening the back door to his house in a plume of smoke and chasing Jeff off his porch for smoking pot. He told us Cheese Burger in Paradise wasnâ€™t written in Key West, but actually in Staniel Cay, Bahamas – because essential Jimmy was on stage and hungry. 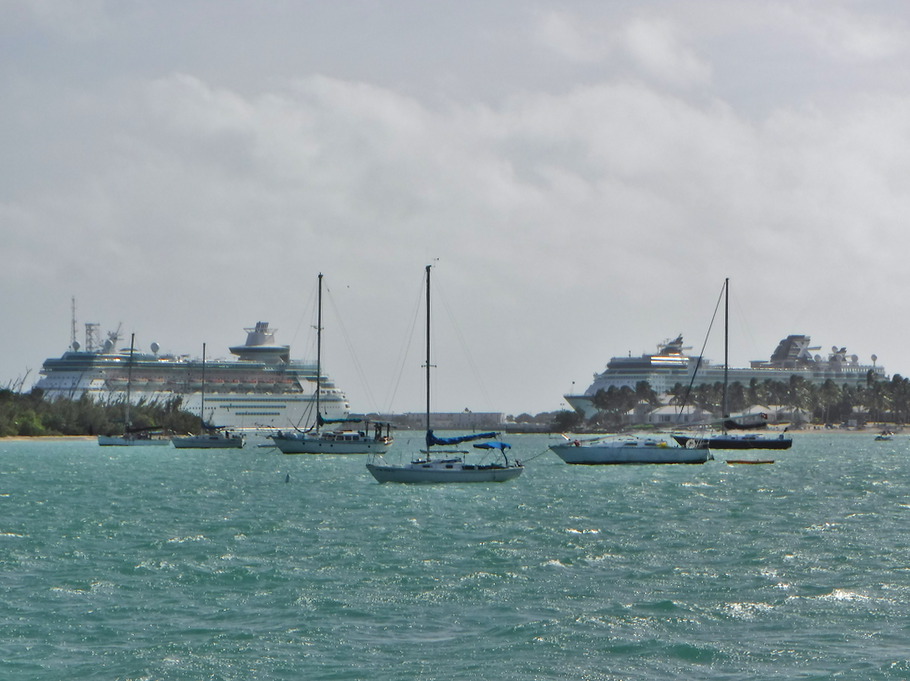 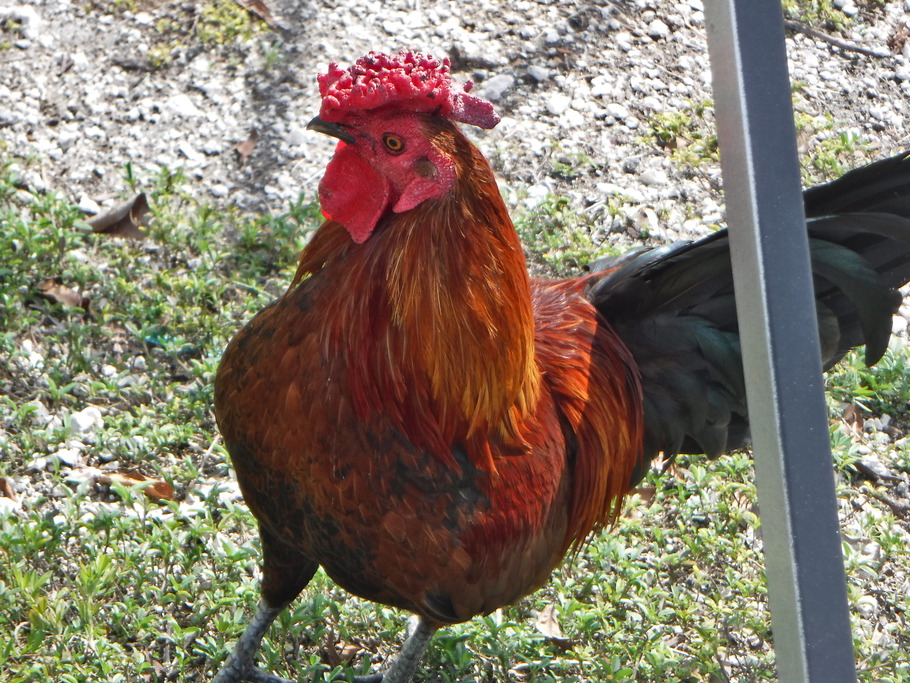 Despite the cruise ships and the throngs of tourist a little weirdness, oddness, creativeness, spontaneousness, and uniqueness still survives on the island.

The feral or â€œgypsyâ€ chickens are still a mainstay, roaming the streets of Key West. Brought to the island some 150 or 175 years ago by pirates and homesteaders, and later by Cuban immigrants in the 1950s, as a source of food and gambling, they eventually went rogue after cock fighting lost favor, and claimed the streets, back alleys, parking lots, and porch stoops as their own.

Art also flourishes on the streets of the island. Art Cars, creative front porches, and street musicians keep some of the creativity of Key West alive. On a rare evening ashore, we spent an evening at the Green Parrot and saw a concert by one of our favorite bands, The Red Elvis’. Afterward we enjoyed walking down Duval street, stopping to hear the young musicians with their dogs busking for coins and dollars. 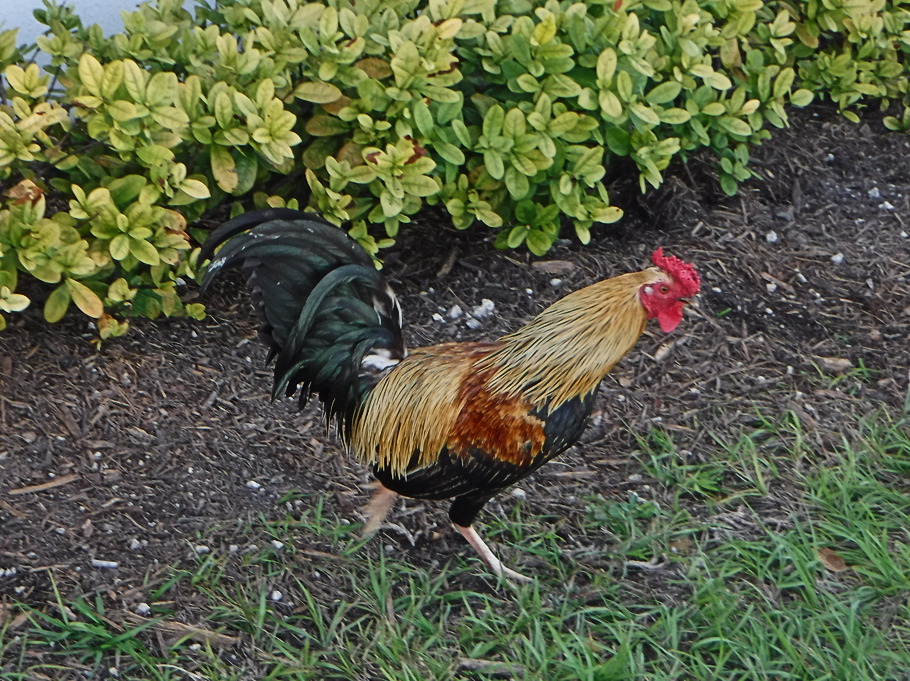 The roosters in town seemed to come in only one style, but out of town, by the grocery store, they seemed more distinctive, like this one. 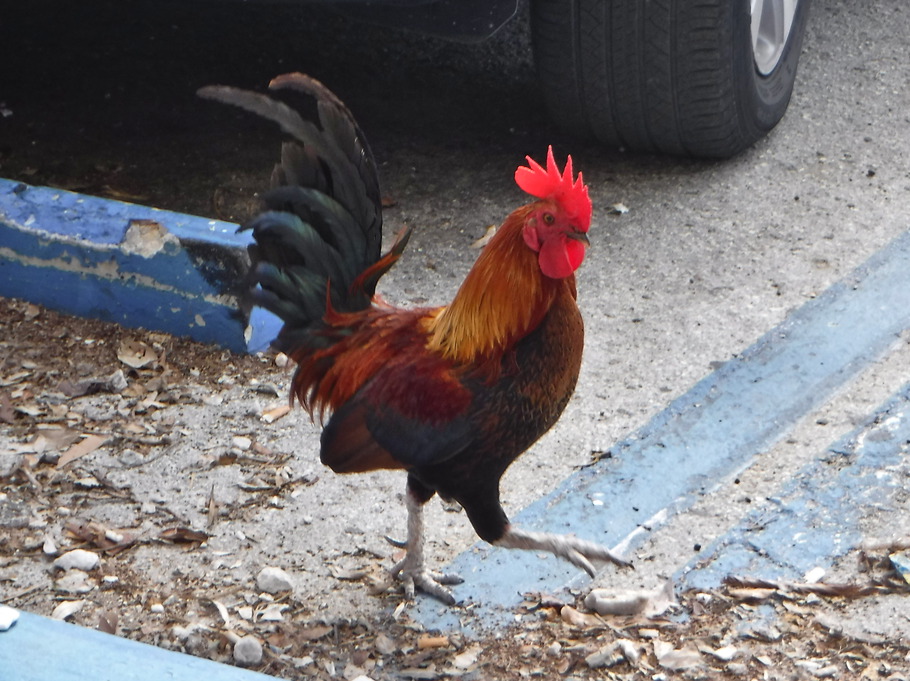 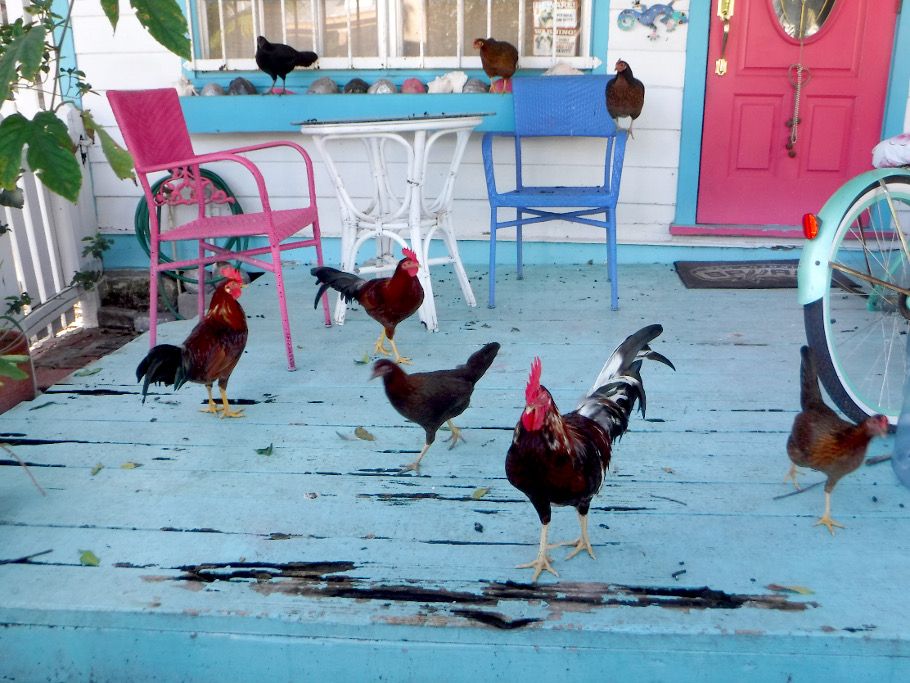 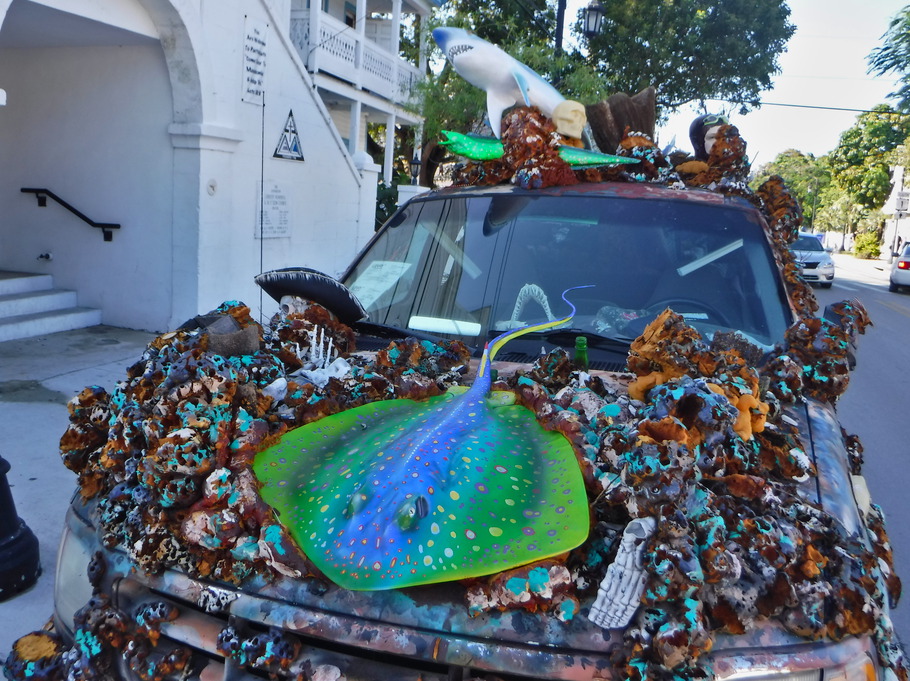 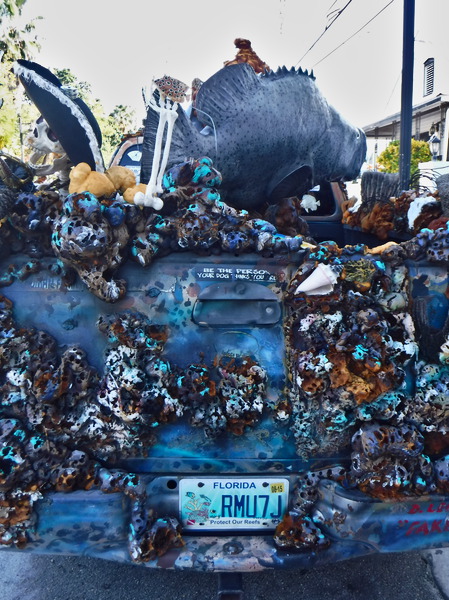 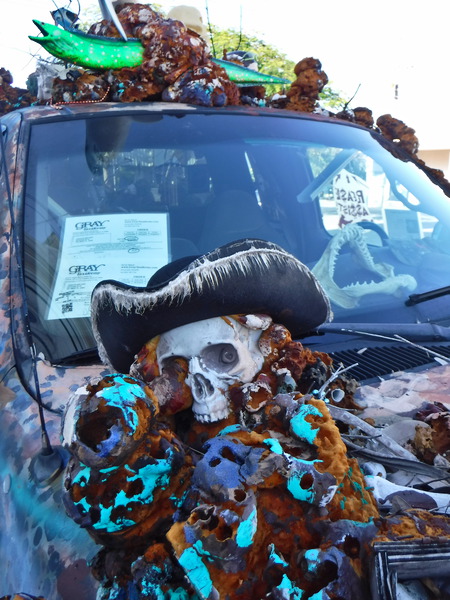 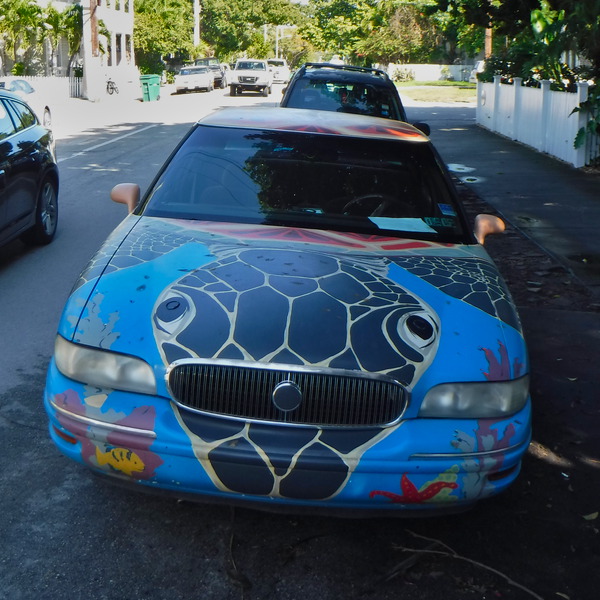 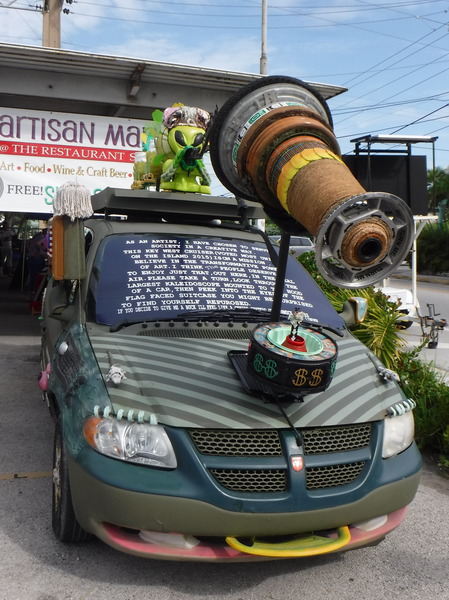 Art car with a kaleidoscope.

The Green Parrot, full of character and characters. (This image is click to enlarge) 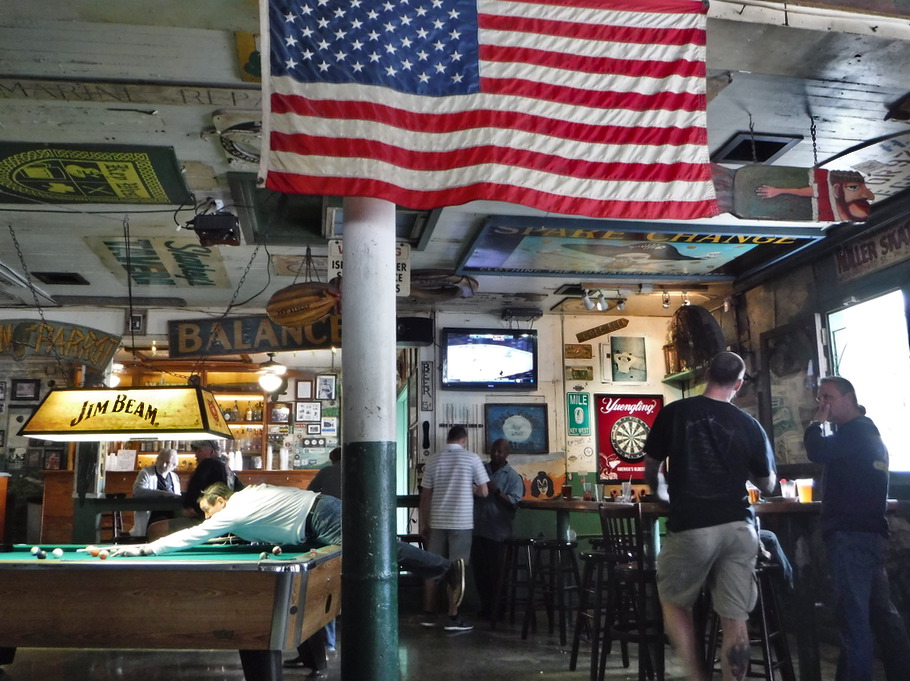 With a history reaching back to the 1890’s, Green Parrot is a Key West icon. 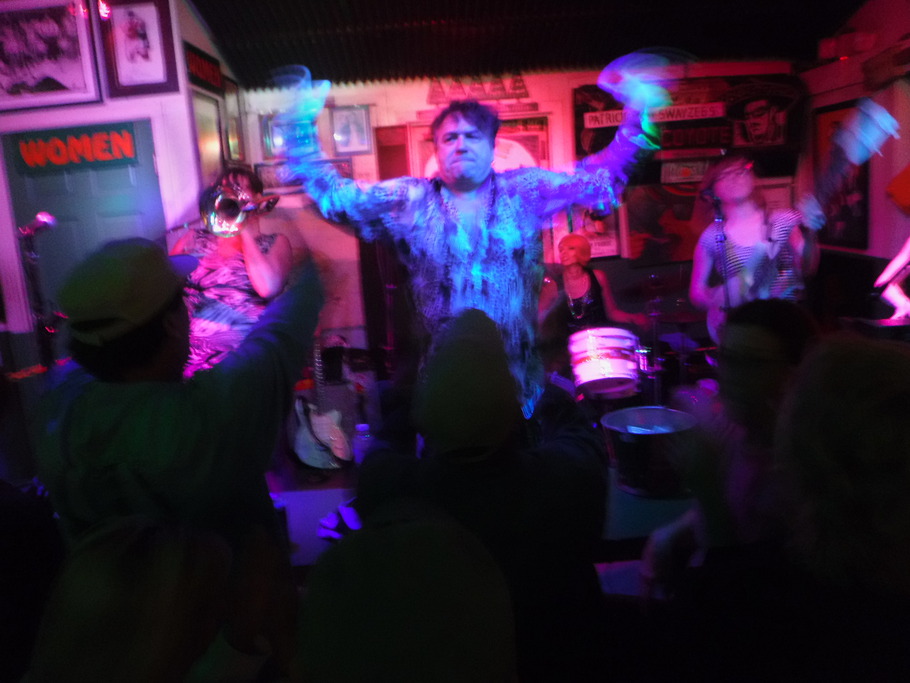 The Red Elvises killed it at the Green Parrot. 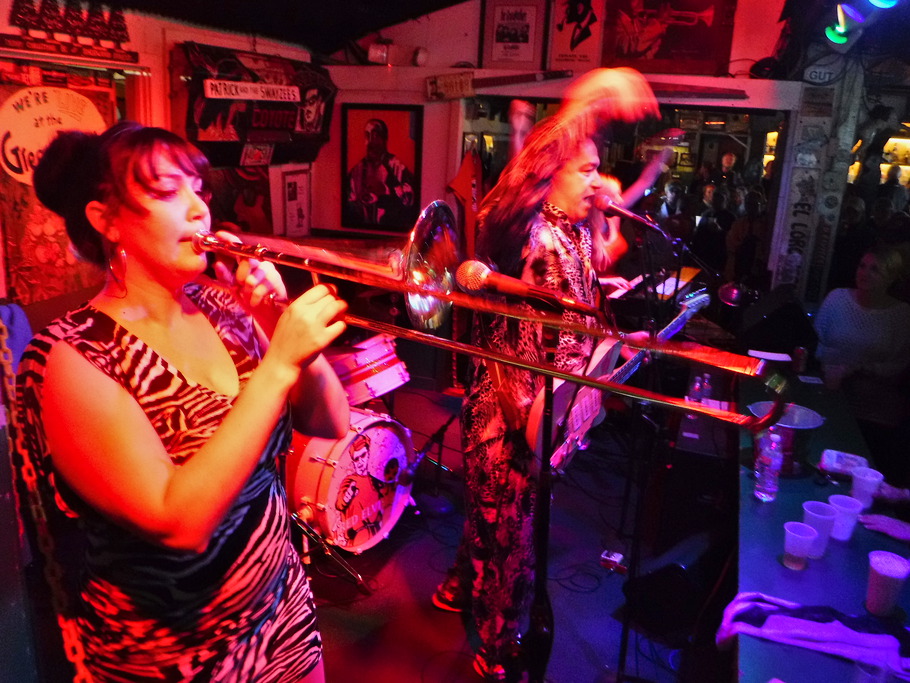 Getting down with the Red Elvises 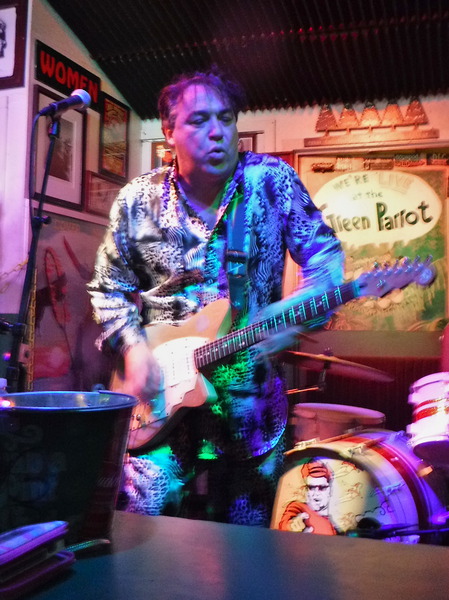 Igor of the Red Elvises. 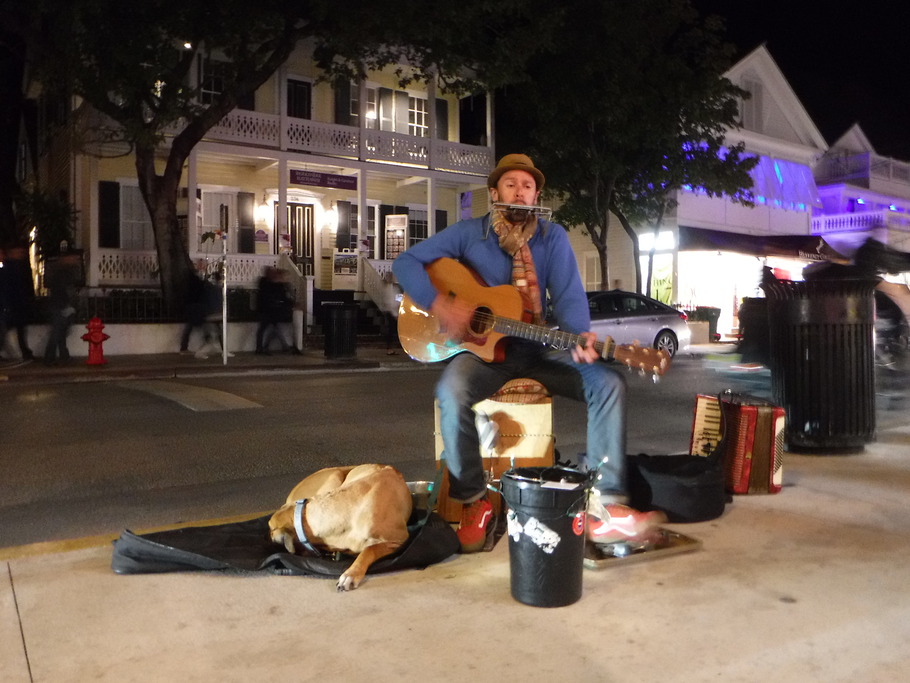 Street picker with his dog. 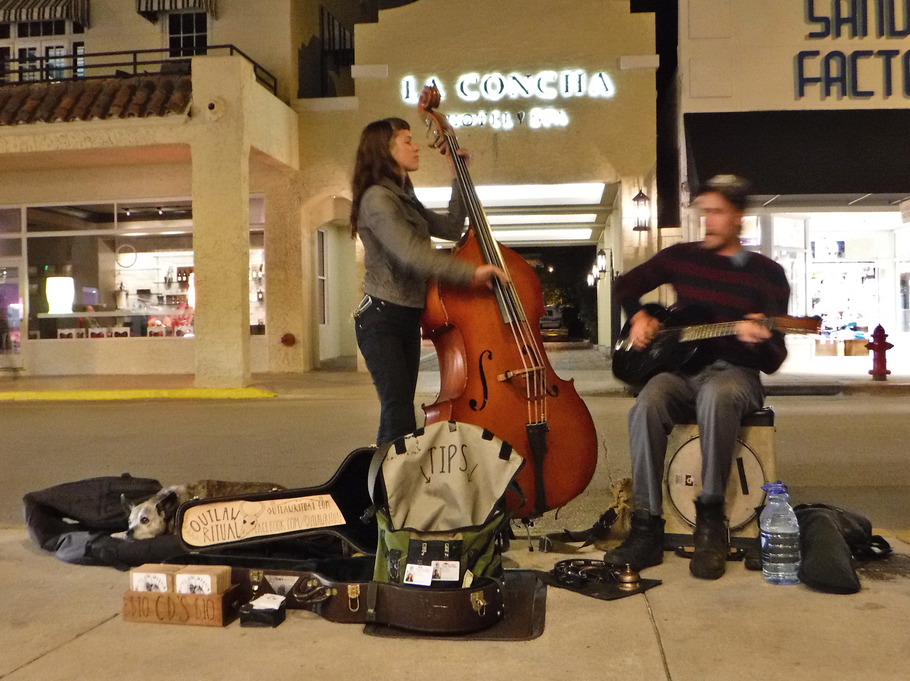 More street pickers with a dog. I was a sucker for the dogs and kept throwing extra tip money in the guitar case.

The Hindu at dock. The oldest schooner in the Keys, build in 1925, she has a long colorful history. (this photo is click to enlarge)

A big part of our stay in Key West was watching the big schooners sail past Blue Wing each evening. Each one has its own story and history of builders, owners, and travels. Tours take you up and down the anchorages, past notable sites, and past million dollar homes on privet Sunset Key island, no doubt with tales of the rich history of the archipelago. Sunset tours run anywhere from $60 to $90. Even though, Iâ€™m sure, sailing on one of these magnificent boats would be a memorable experience, the prices were a little steep for us – especially considering we can sail up and down the anchorage on our own boat. But also, the stories we collected in bars and at bus stops were priceless in experiencing Key West. And honestly, if I were going to take a tour around this island, I think I would like to go with Doc and Dave and meet the real people who live the real story of Key West. Salty Stories and Pumpouts – I think it would be huge, donâ€™t you?

We talked to the woman pictured here about this schooner, Spirit of Independence, about her journey helping the owner sail the boat down the east coast. Every boat has a story. (this photo is click to enlarge)