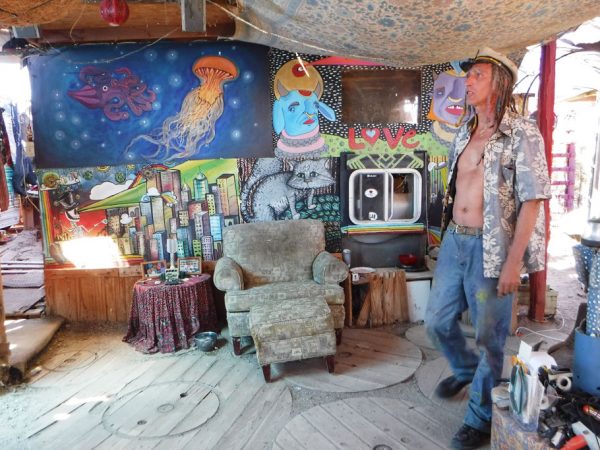 Resident artist shows us his living room in Slab City.

This post is a Widdershins Wednesday — which means we are turning the hands of time backwards and catching up on our travels we didn’t get a chance to write about last year. In this post we are setting the clock back 9600 hours to right after we left Tucson (again) and made our way to Slab City in California…

It’s just like any other town, but without the money. There are neighborhoods, bars, art exhibits, and a library. But there are no water mains, sewers, trash service, or power lines: or local law enforcement. Welcome to the wild west. Welcome to Slab City.

The “city” is located in the Sonoran Desert, east of the Salton Sea. It’s perched on concrete slabs that were once the foundation of Marine Corps base Camp Dunlap. When you’re down on your luck in Atlanta, become a stripper at the Clermont. When your luck goes south in California, hitch a ride to Slab City.

There are maybe 150 souls who brave the summer temps to live here year round. Hundreds more RVing snowbirds come south to enjoy the winters. We met some friendly folks. Who knows? Maybe someday I’ll be asking you for a ride to The Slabs. 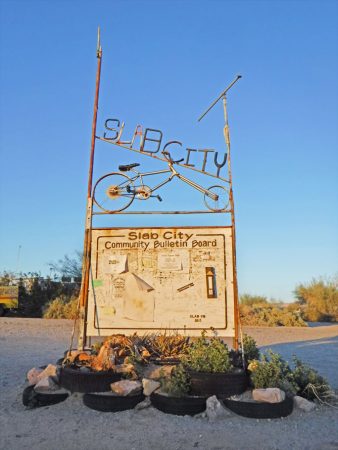 Bar near the entrance of Slab City. 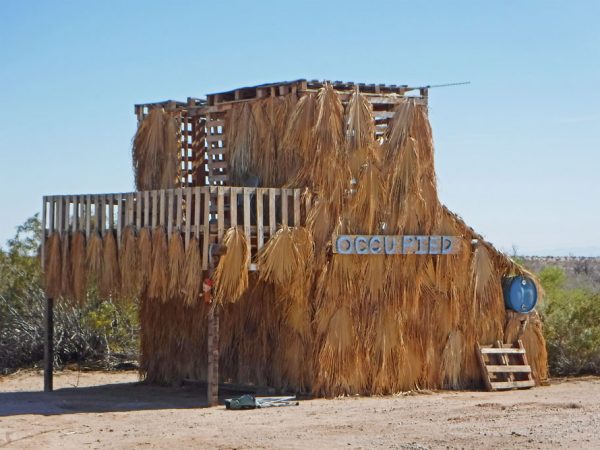 Slab City residence. Many of the walls in this desert town are made of pallets. 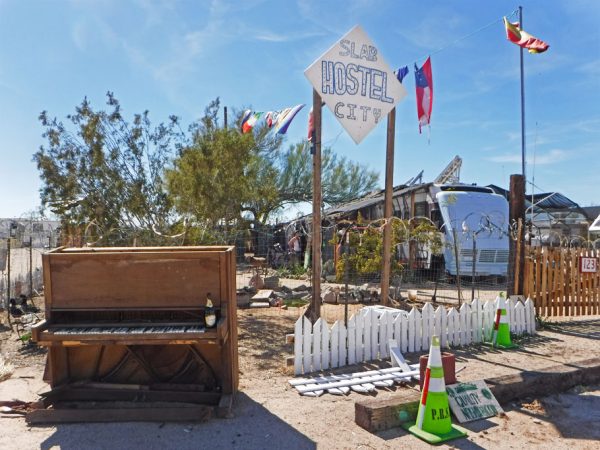 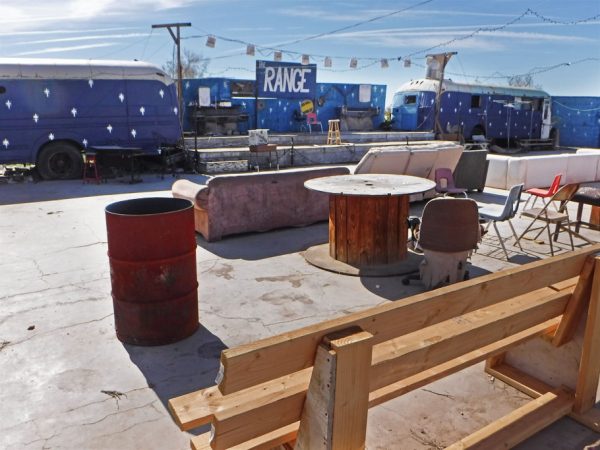 The Range, an outdoor bar in Slab City. 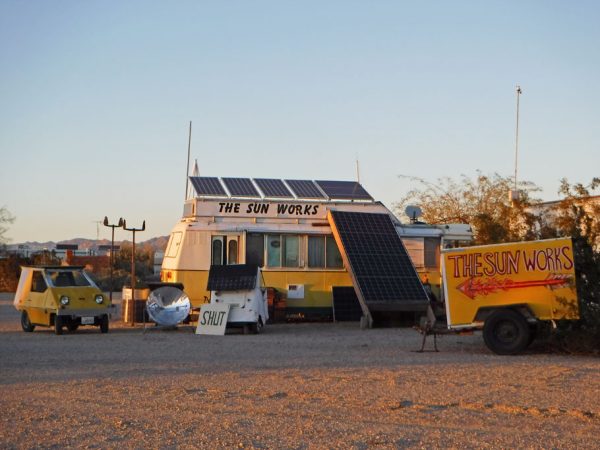 Can’t tap into electric lines here. But the solar guy will fix you up. 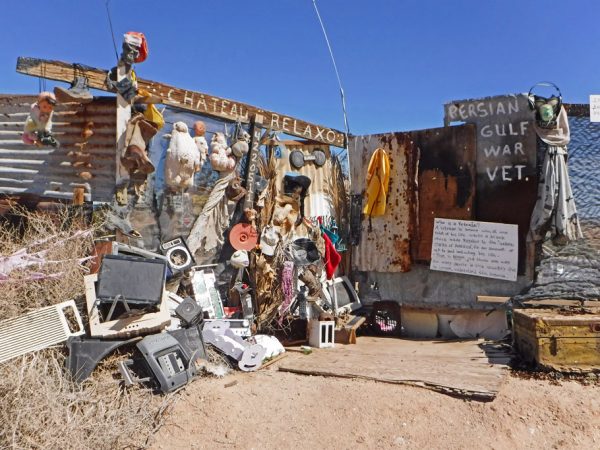 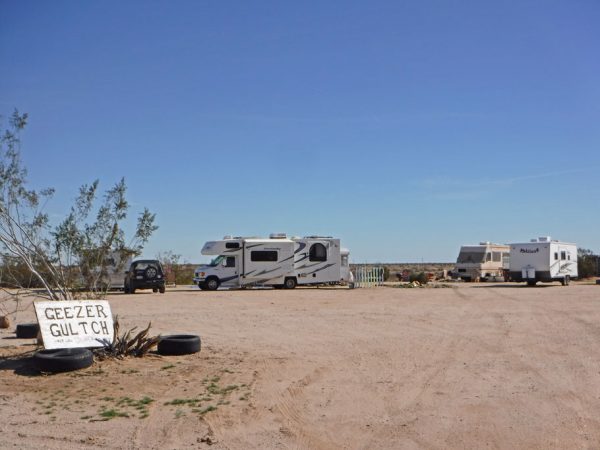 The snowbird section of town. 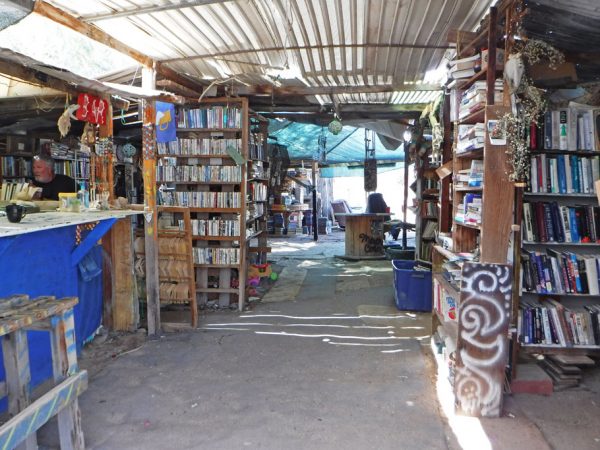 The Slab City library is surprizingly large. We’re looking at a small section near the checkout desk. 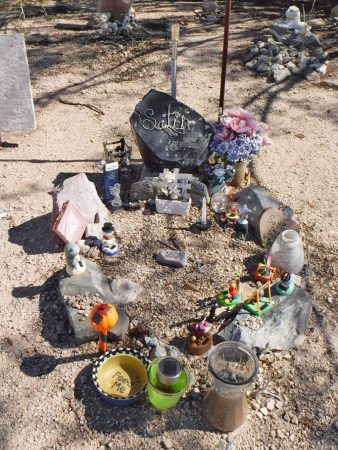 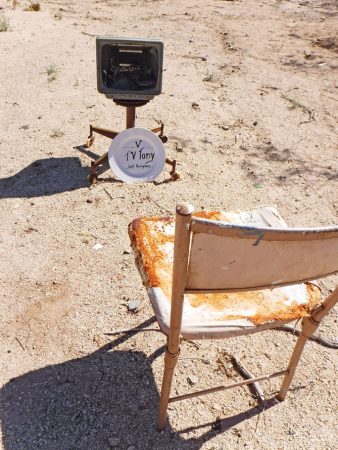 There were also some memorials to humans near the Pet Cemetery, This one is for TV Tony. We hope he is really buried somewhere else. 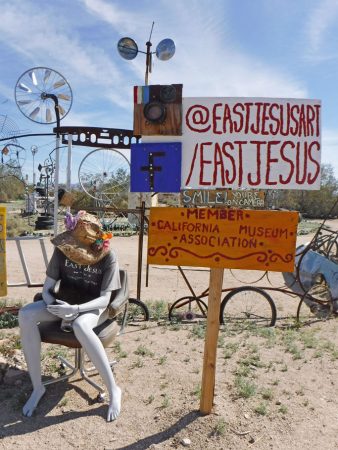 Slab City has an official outdoor art museum in the East Jesus section of town. 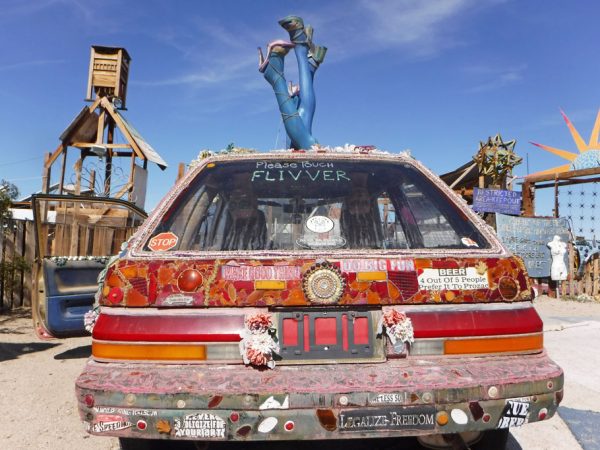 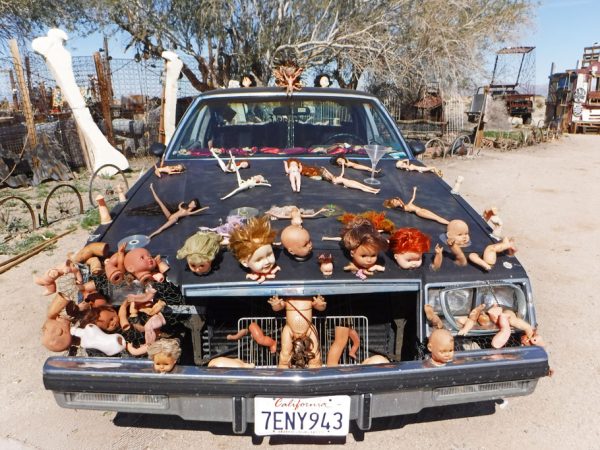 Going for a ride in East Jesus art museum.

We learned in the art museum that not everyone loves dolphins. 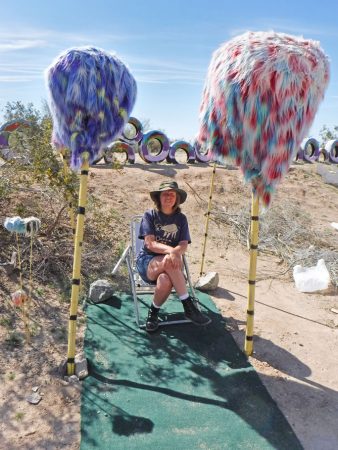 Duwan takes an art break on this throne. 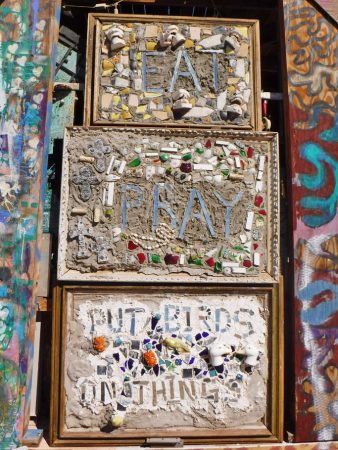 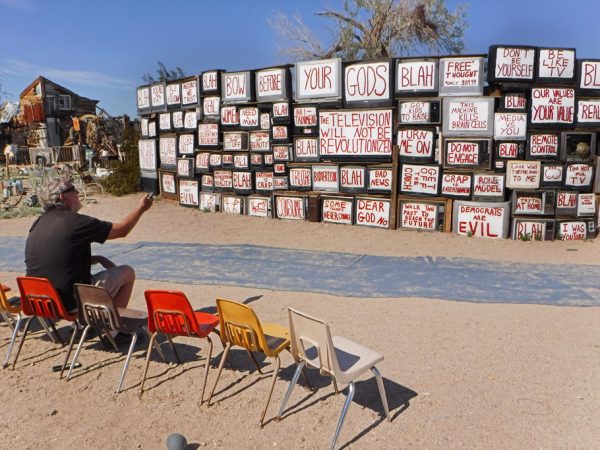 Greg tries the universal remote, but it doesn’t change any of the stations on the wall of TVs.

In 1984 Leonard Knight moved to this spot just outside of Slab City. Saddened by the complexity of all religions, he worked until 2011 building Salvation Mountain, which is dedicated to the simple belief that God is Love. 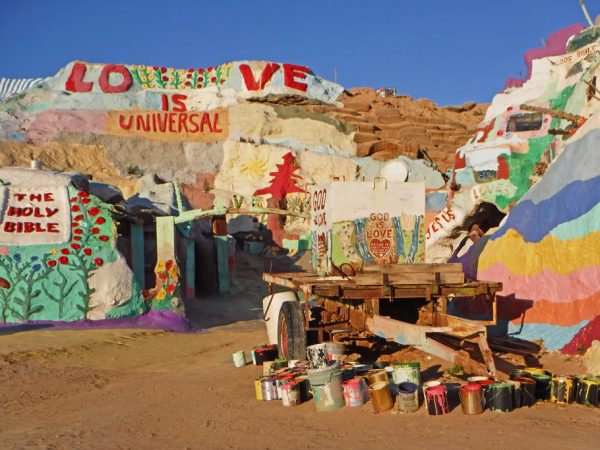 Leonard had no electricity or running water. He added water to the soil, making mud to plaster the walls. Then he painted them with simple messages. He died at the age of 82, but volunteers continue repairing and refreshing the paint on his work. 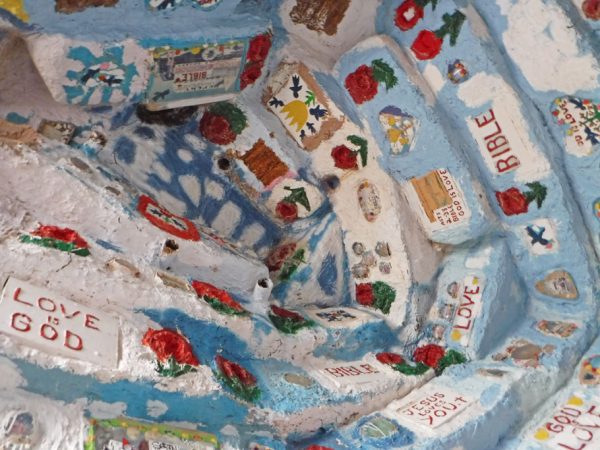 The interior of the “mountain” has also been painted. 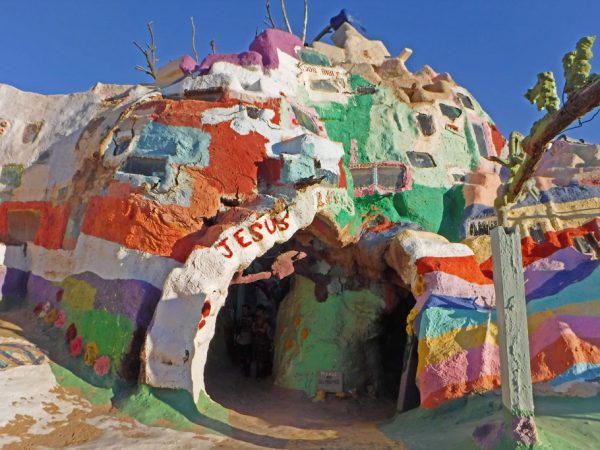 Entrance to one of the chambers. Leonard used existing trees, boards, and hay bales to support the clay walls. This section has numerous windows. 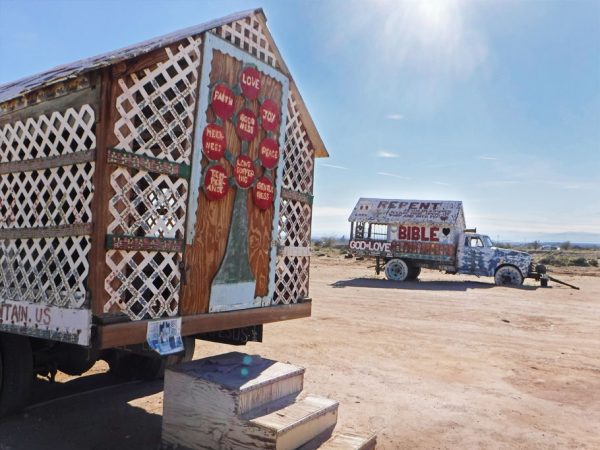 Vehicles outside of Salvation Mountain have also been turned into art. 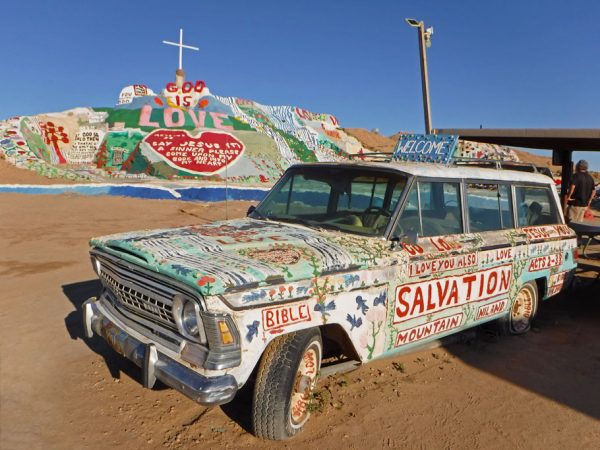 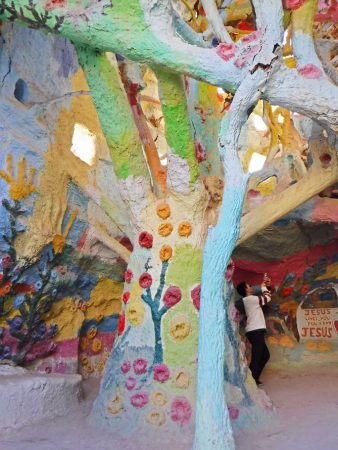 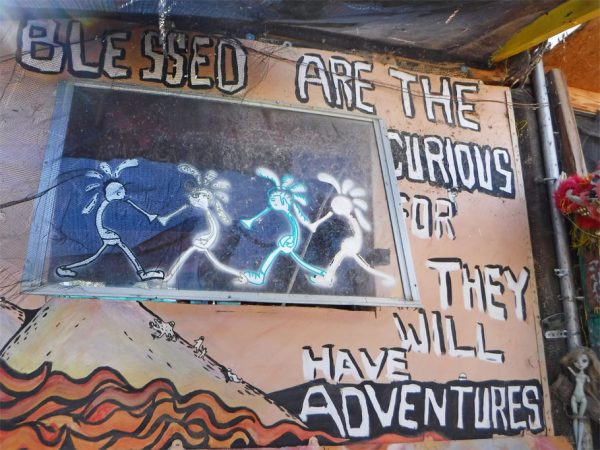 We’re back in Slab City near East Jesus. This area is called West Satan, possibly as a response to the hoity toity state sanctioned museum in East Jesus. Here is some art from West Satan.

Permanent resident of West Satan shows off his broken mirror and spool artwork, which is still in progress. He told us that someone rides through every few days selling water. Most people dig pits for trash and burn it occasionally. Some use composting toilets, and some bury their waste. He knows of one guy that pours gas on his poop pit and burns it (just like he did in Desert Storm).